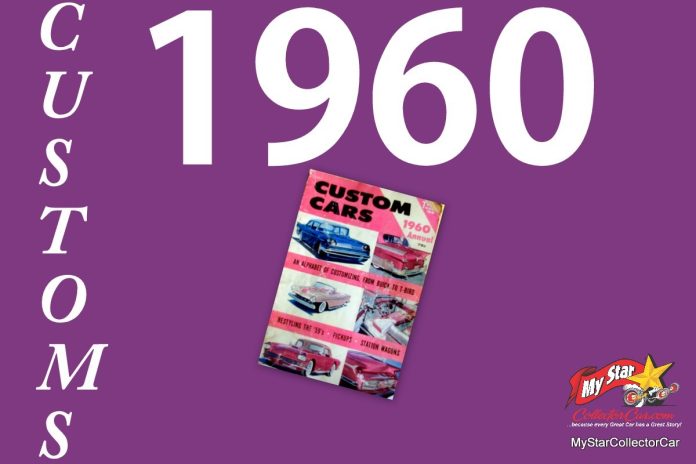 Once upon a time, paper print magazines ruled the planet and delivered information to millions of readers.

However, my well-rounded education did not include ‘Custom Cars’, a monthly car magazine published for 3 years from 1957-60, a big problem since I was too young to even have learned how to read during that time frame. Let alone build some of the coolest custom cars in the history of the car hobby and showcased in the short-lived car magazine.

A talented local car guy named Stan Palm gave me a box of retro car mags and introduced me to an amazing part of custom car history when I found the Custom Cars 1960 Annual in the mix. Annual print magazine editions were essentially a “best-of” publication that were bigger and cost more (75 cents in this case) than a monthly version.

The cover of Custom Cars’ annual edition was a moment frozen in time that illustrated the custom car style from that era because some of the custom rides had a quad headlight system, a feature that began in 1958 for domestic cars. Therefore, the cover photo of a 1957 Ford with quad headlights frenched into the car’s front fenders my eye since the ’57 Ford was their last dual headlight car for many years after 1957.

To be honest, I am not sure whether the ’57 Ford looked better with quad headlights, but the net result is a custom ride that reflects the owner’s sense of creativity in vivid 1960 “what-if” fashion.

Another custom quad headlight example in the 62-year-old was a 1955 Merc with an outlandish quad headlight setup. This car was a bridge too far for me in terms of good style and taste.

A period custom feature that jumped out at me in the magazine was the use of custom tailfins on 1957 Chevys.

The bold transition included Packard taillights in two examples and completely changed the back end of the famous Tri-Five model in very cool fashion, in my humble opinion.

I also liked the creative use of canted (slanted) quad headlights on one of the ’57 Chevys, a popular custom touch used by many car guys during the late 1950s and early 1960s.

A 1956 Dodge convertible named Aqua Angel looked nothing like its stock counterpart, mainly because its builder relied heavily upon a standard approach to retro custom projects: he used the best style features from donor vehicles and ran with the idea.

The ’56 Dodge drop top sported shark-inspired custom rear fins with donor taillights from a 1957 Chrysler to give it a very strong one-of-a-kind style. The side trim was donated by a 58 Ford and looks like it was made for this Mopar.

The hood is most assuredly not a factory style and gives the ’56 Dodge a sporty Euro look in my opinion, particularly since it is a convertible model.

There are too many stellar examples of period custom rides in the ‘Custom Cars’ 1960 Annual edition, but I would be remiss if I did not include a wild 1952 Mercury station wagon in my list.

Once again, the custom builder used Packard taillights on the wagon and frenched them into the extended rear fender, additionally he added a generous cluster of gauges to the car’s dashboard.

However, one could argue the best custom features on the ’52 Merc station wagon were hand-built. The list included a Continental kit molded into the tailgate, louvered hood, and fender lids over the front headlights. The builder also chopped and channeled the wagon to give it a lower, sleeker style.