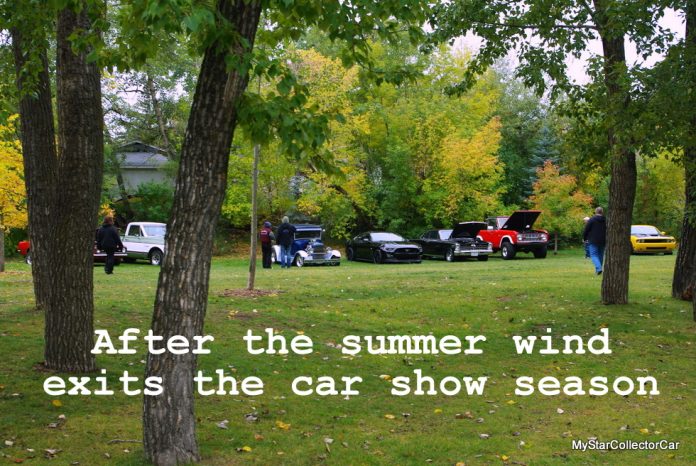 MyStarCollectorCar has never made a secret about our undying love for the summer season of car shows here in Western Canada.

The warm weather makes a guest appearance and allows classic vehicles to gain temporary day parole from a winter of solitary confinement in a garage.

Unfortunately, summer is an all-too-brief season in our region and begins a hasty exit in September when the autumn temperatures fall at an alarming rate that is just slightly above the dead leaf rate.

The message is merciless and brief: Summer has taken the next bus out of town and Winter is on its way in a big hurry.

Well-known musical legend Francis Albert Sinatra addressed the issue of a summer exit in his classic August, 1966 hit ‘Summer Wind’ in which he described the end of summer and romance in his world. The song’s lyrics specifically referred to a lost relationship with a woman who was essentially a summer fling and ended a romance at the end of the summer.

MyStarCollectorCar applies the same feeling of loss to the summer car show season every year because the end of summer means the end of a world that includes vintage rides on the roads. Many of these cars were driven year round during their early years because they were the only mode of transportation for many of their owners at the time.

There will be no more winter road adventures in sub-zero weather on dangerous roads that may be well-salted to improve the chances of rust damage for the older rides. The vintage vehicles have already paid their winter driving dues during a bygone era and many of them were subsequently saved by owners who wanted to restore them to the same (sometimes even better) level of glory the cars possessed when they left the dealership for the first time.

The classic cars occupy a place and time in their hearts. The venerable vehicles represent a sentimental journey down memory lane and the summer season is the only time when the owners are willing to make that trip with their beloved rides.

So it is no secret that we at MyStarCollectorCar look forward to the summer season because we get re-acquainted with classic rides at shows during this time of year. We also see the classic cars in traffic during the summer months and love the way they stand out in a crowd in a four-wheeled rock star way.

There are no guarantees the weather will be friendly at either end of the car show schedule because they are very reliant upon the fickle nature of the summer wind in our region.

All we know here at MyStarCollectorCar is the end of summer also means the end of the car show season for us-so we understand the sense of loss found in Sinatra’s ‘Summer Wind” classic from a bygone era-just like the classic cars we see every summer.