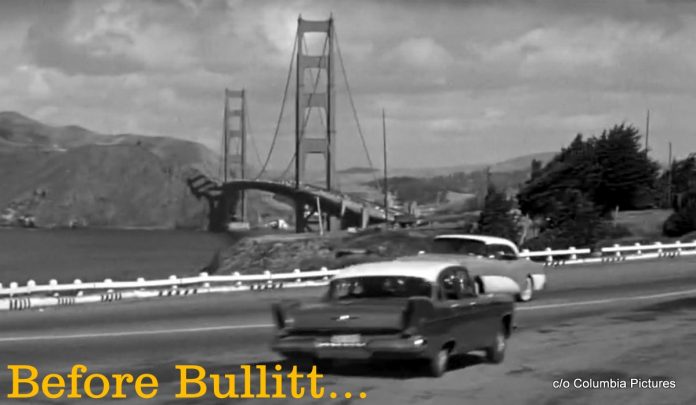 I like watching old movies because they are a rolling car show with period-correct old iron.

The movie was The Lineup, and it was released in 1958, plus it was a police drama set in San Francisco—that’s important because it was a full decade before the legendary chase scene in Bullitt. This movie was what they call a film noir—basically that means don’t look for any comedy—just hardcore cops–and  hardcore crooks.

It starts with a bang—a ’54 Plymouth Plaza taxi is demolished in the first minute when a bad guy cab driver is shot by a cop after he pulls a hit and run. The Plymouth is an early casualty long before the chase scenes.

The plot is pretty basic. Drug dealers are using citizens as unwitting drug mules, so they stuff heroin in dolls and other souvenirs from the Far East—that’s 50s talk for Asian countries like China. The guy who played Milburne Drysdale from the Beverley Hillbillies is the first victim because his luggage theft set off the Plymouth car crash. He’s not wearing a rug so you might not ID him.

The bad guys are truly humorless criminals—that’s how film noir works—and the police don’t crack any jokes either, but they set up a really cool car chase.

There’s a kidnapping of a mother and her daughter, plus a head bad guy gets shoved off a balcony during a heroin transfer that came up a little light in ounces, but the real action starts with the car chase.

This car chase covers more of San Francisco than Bullitt because the bad guys emerge on the other side of the Golden Gate bridge and rip past The Presidio. San Francisco natives will scoff at the impossible route in this movie, but that doesn’t matter in a great car chase scene.

What does matter is how cool it is to see vintage 50s iron careening around San Francisco in a hell bent for leather chase scene a decade before the Bullitt chase.

They do some 50s era things like back (or rear) projection to show the interior driving scenes, but most of the chase scenes involve torturing Exner era classics like ’57 Dodges and Plymouths.

The Big Three is well-represented in The Lineup because the military and San Francisco police use ’56 Chevys as roadblock cars.

There are several ’57 Fords used in the chase scenes and in the roadblocks, so the major manufacturers were definitely involved in this film.

One of the last scenes of the chase ends when the crooks drive on to an overpass under construction and realize the road ends with a giant drop from an overpass because the rest of the bridge isn’t built.

You’ll never see it in the movie, but this part had some serious behind the scenes comedy when the stunt driver took ‘Take Your Wife to Work Day’ to another level. He drafted her to be a female stunt double for the end of the road scene and they had to stop filming because she got out of the car screaming hysterically.

Too bad this was a film noir–that would have been a funny ending.