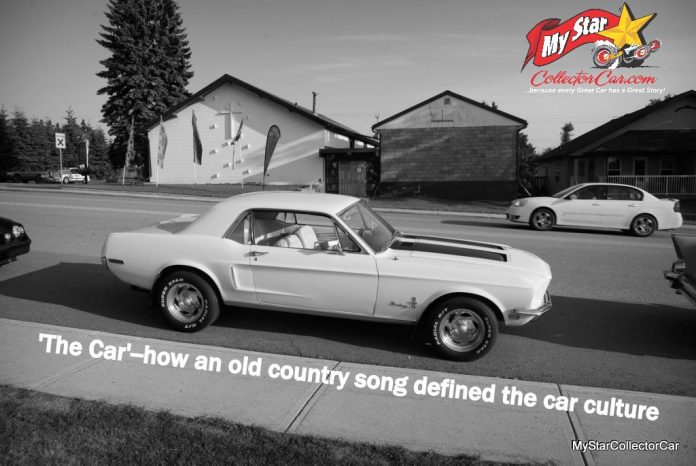 We at MyStarCollectorCar are not dyed-in-the-wool country music fans, but we admit this musical style has many worthy songs in its lineup.

Country music is famous for its ability to tug at listeners’ heartstrings and produce enough emotion to require an adequate supply of Kleenex under the right conditions.

Sometimes it takes a while for us here at MyStarCollectorCar to even become aware of country songs, including a 1995 tune (‘The Car’) that charted Number 3 on the country charts. The recent death of singer Jeff Carson hit our newsfeed and included a list of his songs in his biography.

To be fair, we were unaware of the singer because we are not dialed into the country music scene, but we wanted to learn more about the man, so we researched his career and found Jeff Carson recorded a hit song entitled ‘The Car’.

‘The Car’ is about a first-gen notchback Mustang that was on the radar of the high school kid in the song’s early stages, mainly because the ‘Stang was available for sale. The main problem was very familiar to many young car guys because the kid did not have enough dough to buy the Mustang at the time.

Instead, he prodded his father to buy the car so they could work on it together and restore it back to the road. Unfortunately, his widower father did not appear to have the financial or emotional resources to help his kid buy the car. His dad worked long hours and visited the grave site of his late wife in his spare time, according to the song lyrics.

Most car guys have a special one-that-got-away car in their lives, mostly due to financial realities when they were young, and the singer’s high school dream car fell squarely into this category. Eventually the song moved along into the kid’s adulthood and parenthood while adjusting to the fact his unattainable high school dream ride had become a “distant memory”, in the song’s words.

Except that his Mustang dream had not drifted away into his past. The death of his father occurred after the singer had also become a parent and was forced to deal with the loss of his dad. His late father had written a note to his son and included a set of car keys in the envelope.

His dad had indeed purchased the Mustang all those years ago and wanted to surprise his son with the car to ease the pain of the man’s death, complete with unfulfilled dreams. His father realized how much the Mustang meant to his son and knew he had to buy it for him, even though his dad was unable to make it a father/son project at the time because of other life responsibilities.