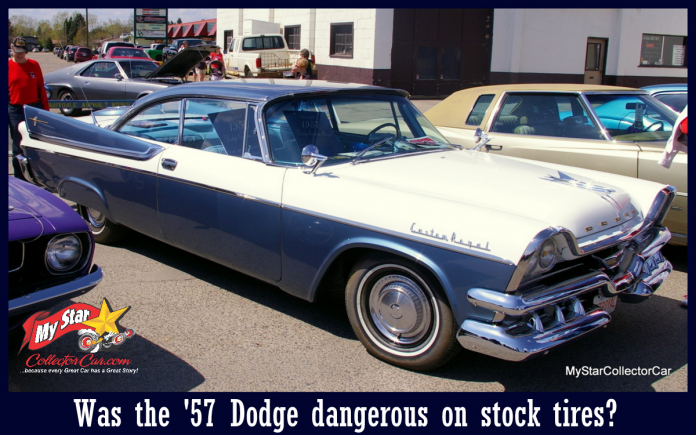 This tidal wave of opinion was showcased on a recent social media page when a guy asked whether 18” or stock wheels looked better on his ’57 Dodge. The answers were predictably mixed in tone and opinion, but one guy took it to another level: “Eff the fan boy purists. They believe risking safety, driving on marginally dangerous, labor intensive, expensive and unreliable factory garbage is better than being safe and finding parts inexpensively, everywhere”.

That wasn’t an opinion—that was the written equivalent of a punch in the mouth. He took the civilized debate rule book and burned it to ashes with a blowtorch. My problem with his all-encompassing carpet-bombing approach to a civilized discussion about tire size is how easily he throws stock old iron under the bus. ‘Unreliable factory garbage’ isn’t the best way to describe a ’57 Dodge—if you think that describes an old car, skip on down to your local Honda dealer and find something safer.

I did agree with this part of his tirade: “And most of the loudest will NEVER own a vintage car”, because he’s referring to guys with no blood in the game. There are far too many opinion-heavy experts who will never own a classic, but chime in whenever they see one so I’ll give him a point for that one.

Then he came up with this gem: “But they are ‘exclusive” when they say, “your wheels are not to my standards of preferring factory crap that makes the car unsafe”. With ZERO experience”. His biggest problem seems to be with the 14” factory wheels—apparently they turn cars into death traps.

He also factored class wars into his argument: “Oh and of course, the multimillionaire “museum” hoarders that can spend $5K on a whim to maintain ONE of their MANY Adventurer convertibles and D500s. F#%$ them too. Neither are average Joes with a vintage car on a budget striving for reliability and safety”.

I understand where he’s coming from but again—if reliability and safety are your priorities—stay away from 63-year-old cars. There’s a Toyota dealer in every city. They can meet those standards with ease.

He ends with this:“Dunno about you, but our car on 17″ Charger wheels drives like a 50+ year more modern car. NOT a wallowing, capsizing oil tanker in EVERY turn at EVERY speed (even with radial tires, and a TIGHT suspension)”.

I tried to like this guy because I agree with his basic premise that an old car can be upgraded to better specs, but you can’t hammer guys who like the stock stuff. Plus there’s that nasty part where he rips on old cars because they have old tech.

How Fast is a Tuned & Lifted Silverado?