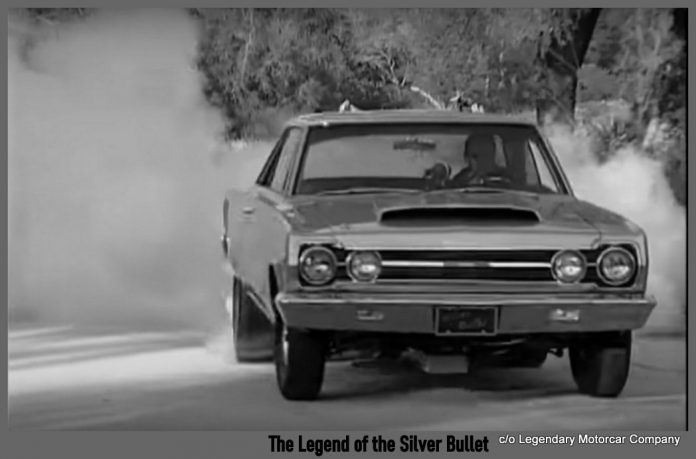 The 1960s were a bloodbath on the street, at the track, and in the showroom because Detroit reached peak power in the horsepower wars.

The old saying, “Win on Sunday sell on Monday” only applied to the tracks because there were five other days in the week.

The Silver Bullet dominated those other weekdays and it was all done on the street.

The Silver Bullet was originally a test mule 1967 Plymouth Belvedere GTX. It wasn’t even silver when Chrysler sold the car to a guy named Jimmy Addison. Jimmy was a mechanic at a local Sunoco station but even more importantly – he was a legend within the Mopar hemi world.

Chrysler wanted an arms-length relationship with the car, so they sold it to Addison for a buck. There were serious players behind the scene including the godfather of the hemi (Tom Hoover) and a legendary Ramcharger (Dick Maxwell).

Chrysler dipped into its parts bin to turn this stock GTX into a monster that struck fear into the hearts of every car guy within 1000 miles of Detroit. They started by putting the GTX on a diet, so the front fenders, hood, doors, glass and suspension parts were yanked in favor of lightweight replacements.

The back seat was turfed, and the front factory buckets were dumped in favor of Dodge A100 van seats – the car shed several hundred pounds on the crash diet.

The biggest change came under the hood. The original 440 was yanked in favor of a brutish 487 cubic inch Hemi engine with every conceivable upgrade Chrysler could find on the shelf – under the guidance of the incredible team behind the scenes. Jimmy Addison put the pieces together and built a legend.

The key to success was the stealth factor because the boxy-looking ’67 Belvedere looked like every other ’67 Belvey to the casual observer. The traction bars, massive rear tires and four three-inch ’68 Cadillac exhausts told observant car guys this unassuming Plymouth was out to dominate the street.

Dominate the street it did – the Silver Bullet ran consistent 10.5 132 mph 1/4 miles — yet it was still street legal. You can imagine the disappointment when a would-be challenger looked over and saw the Silver Bullet in the other lane at a traffic light. It would be like stepping into the octagon at an MMA fight when you’re 55 years old, overweight and you’ve never been in a fight in your life.

The word on the street back in the 60s was this monster GTX was unbeatable – Ford knew it, GM knew it and most importantly – street warriors knew it. That notoriety didn’t hurt Chrysler’s reputation on the street or in the showroom.