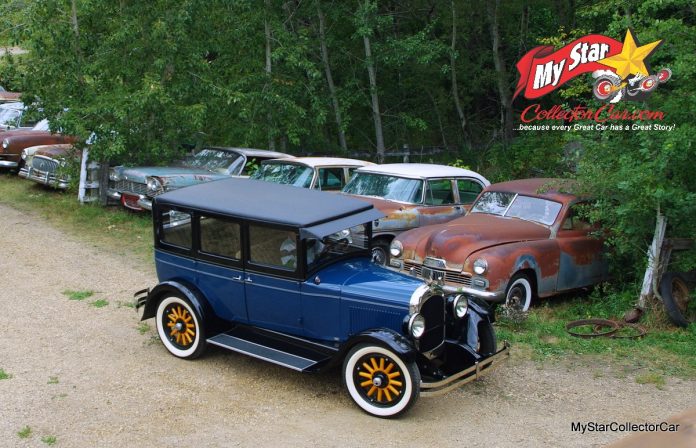 Walter P. Chrysler’s company was still the new kid on the block in 1927 after the car corporation’s 1924 debut vehicle hit the showrooms, but Chrysler was already a rising star in the crowded car-builder field during that early automotive era.

Chrysler had figured out the wants and needs of car buyers from that era, consequently the then-young automotive company offered well-engineered vehicles that fit their budget, including the 1927 Chrysler Model 50.

The ensuing decades have eliminated most of these cars from the automotive world, particularly in stock form, so MyStarCollectorCar was pleased to interview the proud owner of a 1927 Chrysler Model 50 that has been restored back to its original Roaring Twenties glory.

Bob Callfas is the owner and the man behind the Chrysler’s restoration process. He discovered the car through a family grapevine that extended to his father’s sister’s husband’s uncle, the previous owner of the Chrysler Model 50. Essentially the car was owned by his great-uncle by marriage.

The car was sitting in a field and losing a battle with time when Bob purchased it. However, Bob said it “had a real solid body”, so the Chrysler offered an excellent base for a restoration project.

The fact Chrysler was already building steel bodies for their vehicles in 1927 gave their vehicles an advantage over automotive rivals that used a generous supply of wood in their vehicle’s support structures. The thicker gauge steel used in these cars was also a factor in their long-term battle against time and depreciation.

Nevertheless, Bob was staring down a major restoration process when he bought the Chrysler, mainly because he wanted to stay aligned with originality during the build. He tackled the process with some help from his father along the way, but the restoration still took about six years from start to finish, according to Bob.

The engineering behind a 1927 Chrysler Model 50 is “pretty basic stuff”, in Bob’s opinion, undoubtedly because the 1920s marked the early days of the automotive world and were less complicated than today’s computer-centric vehicles.

For example, Bob rewired the ’27 Chrysler, a process that included “all 12 of them” (his words) in terms of electrical terminals. The car has a four-cylinder flathead engine couple to a three-on-the-floor manual transmission. The Chrysler’s early engineering includes a manual spark advance system on the steering wheel that controls the idle speed on the engine, but it also has a pressure feed oil system that was not common on vehicles during the 1920s.

Bob’s Chrysler has a hand crank start choice, but he prefers to use its electric starter for obvious reasons. The hand-operated wiper on the ’27 Chrysler is a reminder of its early days in the world of automotive advancements-before vacuum wipers, let alone electric motor versions.

The Chrysler has old school “air conditioning” that comes in the form of a windshield that opens, along with a front cowl vent that draws in outside air to cool passengers.

Bob believes in driving his ’27 Chrysler whenever the opportunity is available to him, but he keeps a relaxed pace of 35 mph on the road because he wants to enjoy the ride and respects the old school technology in his car.

He is the right owner at the right time for the 1927 Chrysler Model 50.

MSCC NOVEMBER 9 FEATURE FRIDAY: WHAT MYSTARCOLLECTORCAR LEARNED ABOUT CARS FROM...

JULY 20 WELCOME TO MSCC FIVE FOR FRIDAY—FIVE GREAT SONGS WITH...