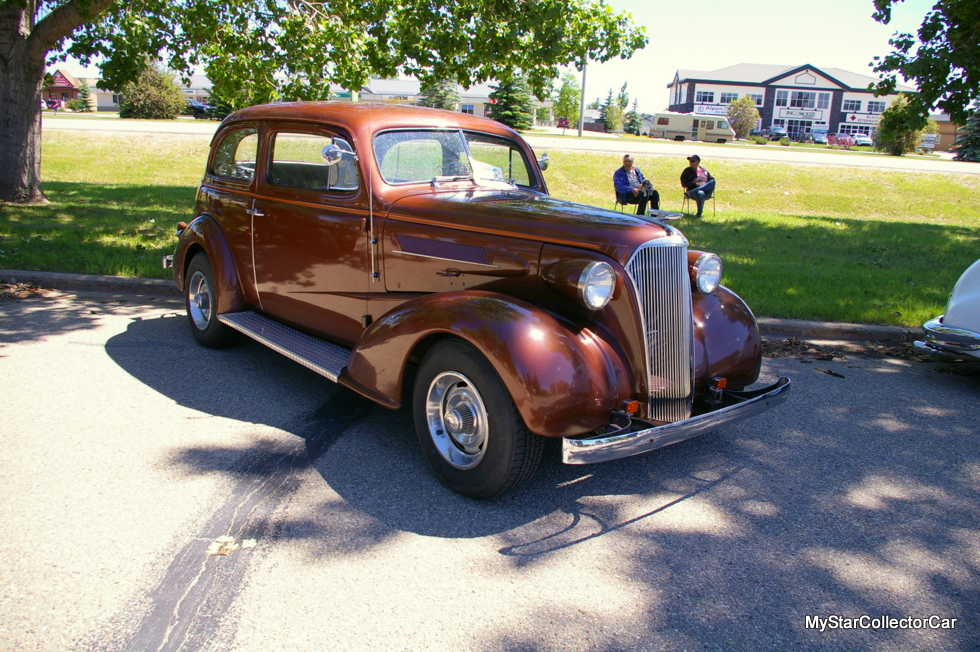 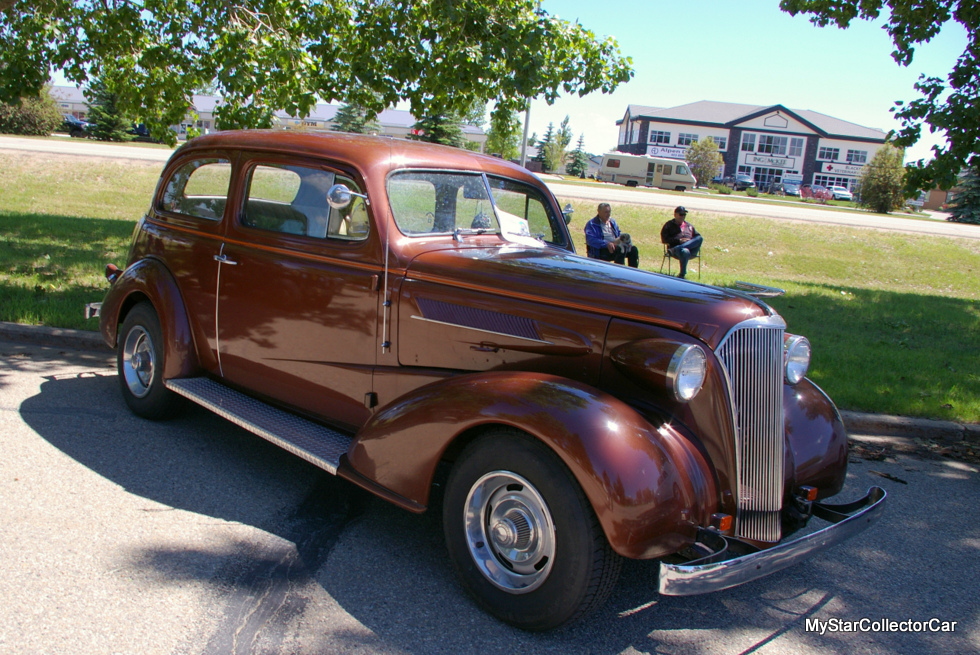 Marty Armella is the proud owner of a 1937 Chevy 2-door sedan that he rescued from 14 years of confinement in an airport hangar when he bought the car in 2013.

The Chevy was already a resto mod but required some work before Marty could get it back on the road.

Cosmetically, the driver’s door was caved in and the tail pan on the car needed a major repair. Marty also added inner fenders to the Chevy, along with custom plated running boards and a stylish new front grille. 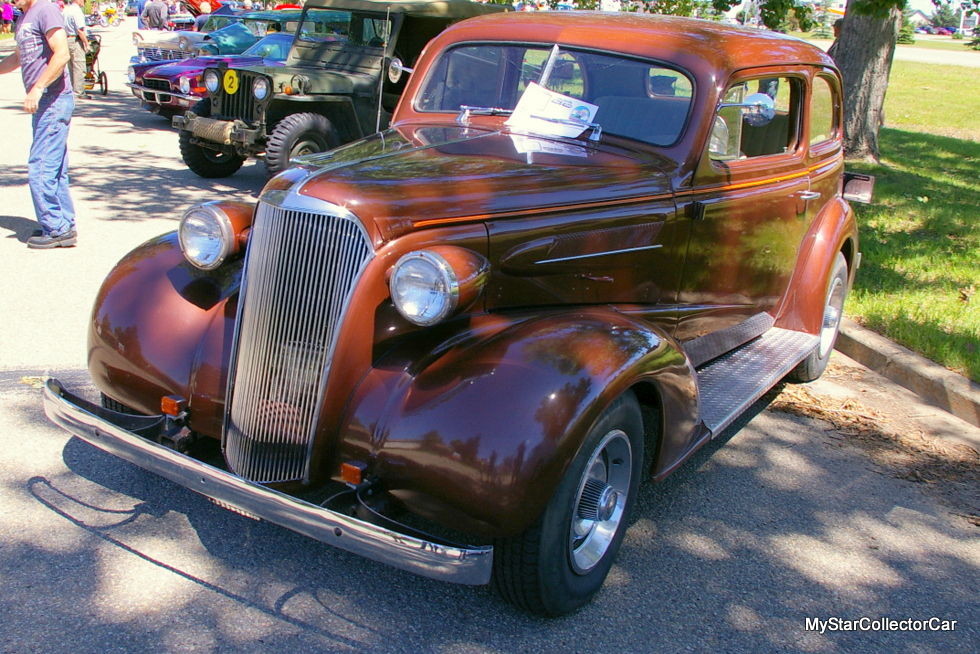 The ‘37 Chevy was one of only three of these cars built in Regina, Saskatchewan, according to Marty. The car was sold to an owner in Winnipeg, Manitoba and still bears a Winnipeg sticker on a rear window. 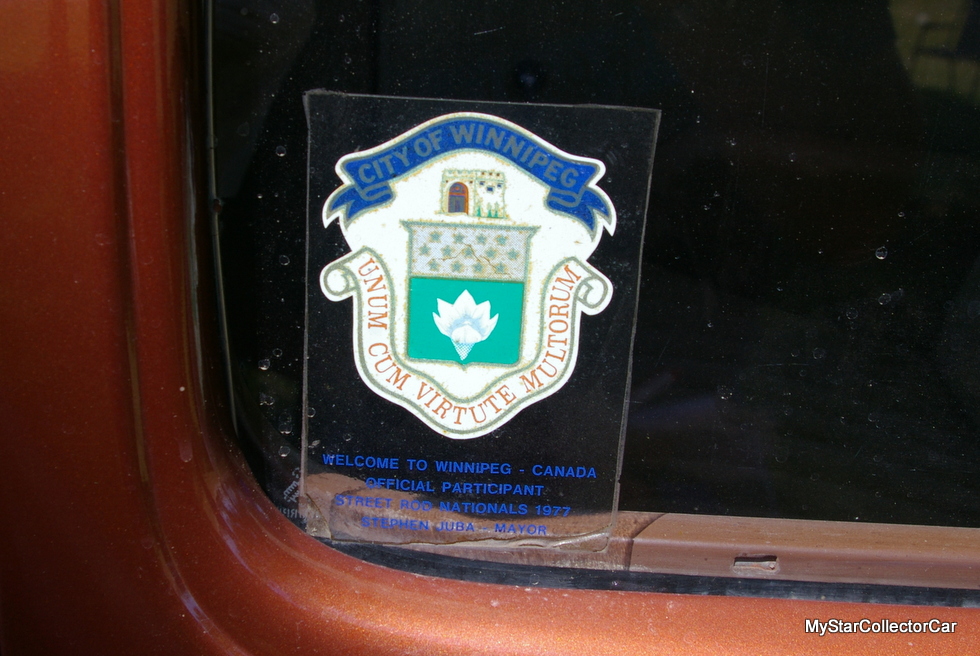 The Chevy’s original powertrain has been replaced by a 327 Chevy small block hooked up to a 350 Chevy Turbo tranny with a 3500 stall convertor. However, the car only has 35,000 original miles on the odometer after 80 years on the road but Marty intends to put plenty of miles on the Chevy in the future and uses it as his daily driver during the summer. 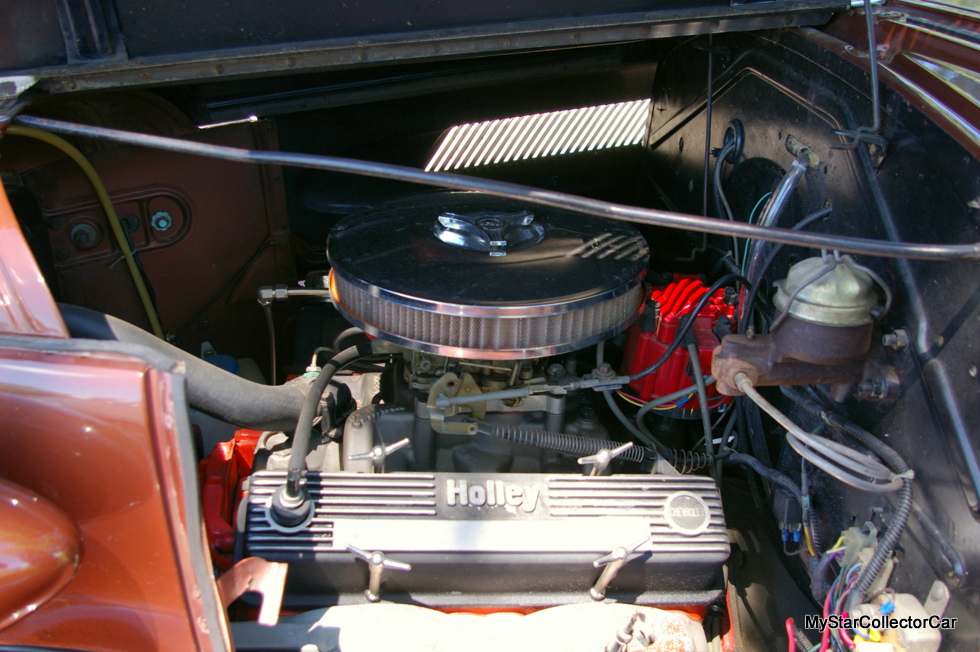 Marty wanted to put his own refinements on the car after he purchased it in 2013 and the process took three years. He got his Chevy back on the road in 2016 and now enjoys plenty of time behind the wheel of his ’37. 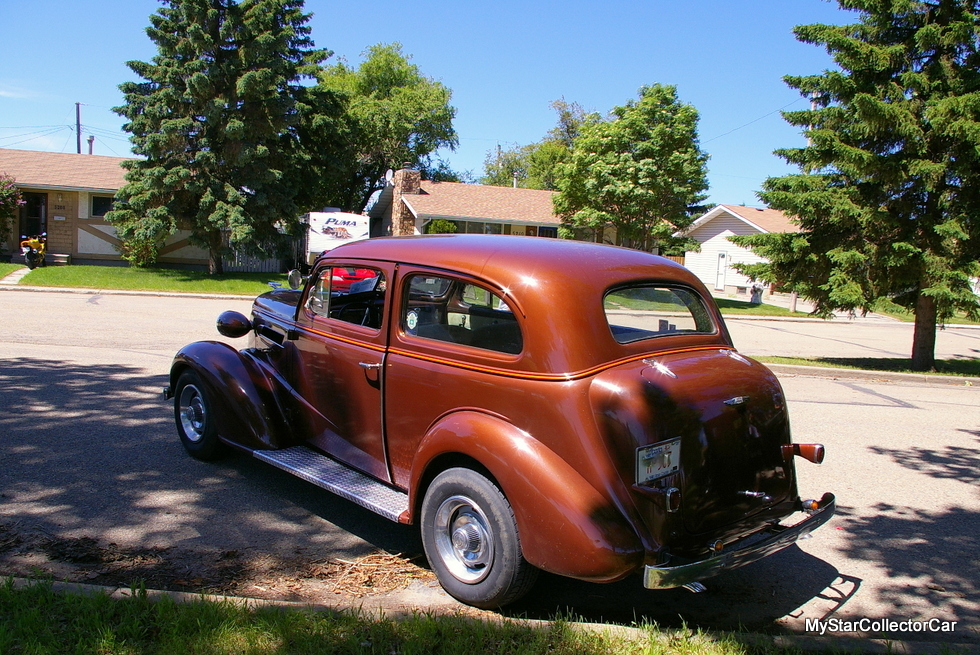 The car now has 50s-era Chevy drum brakes and an older Mopar master brake cylinder that Marty said will “stand the car right on its nose” if he hits the binders hard enough. Marty added a Rav 4 steering box to give the car quicker response when he turns the steering wheel. 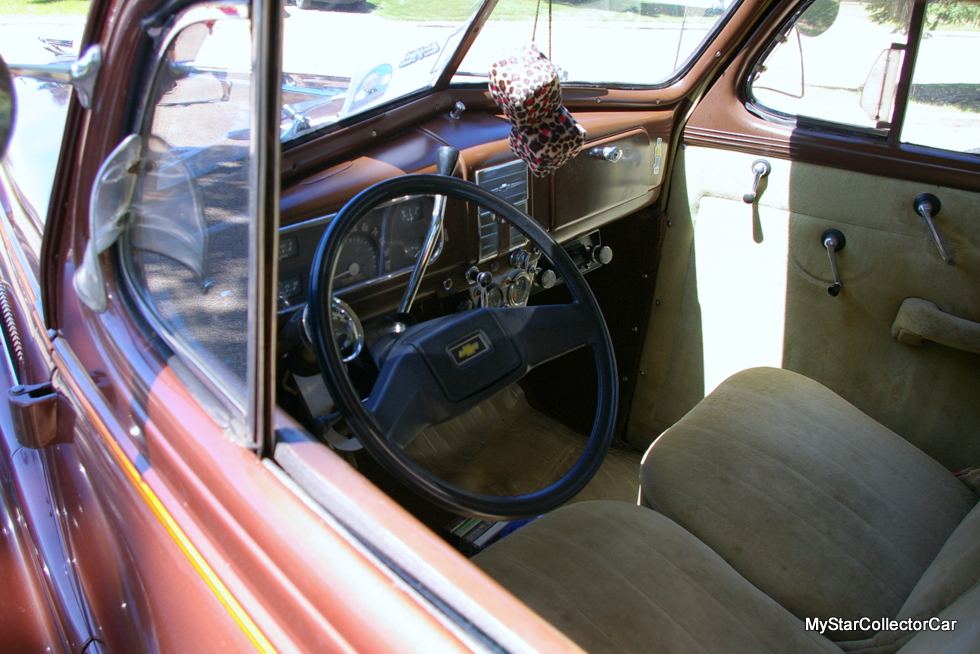 The Chevy still has its original straight axle front end, but now it sports a Ford rear end to handle the torque from the 327 small block.

Marty repainted the driver’s door and rear pan out of necessity, but the rest of the 30-year-old paint job was left intact.

He also replaced all of the weather-stripping on his Chevy because he wanted to cut down the wind noise in the car at higher speeds. Marty also added LED front and rear turn signals to his Chevy. 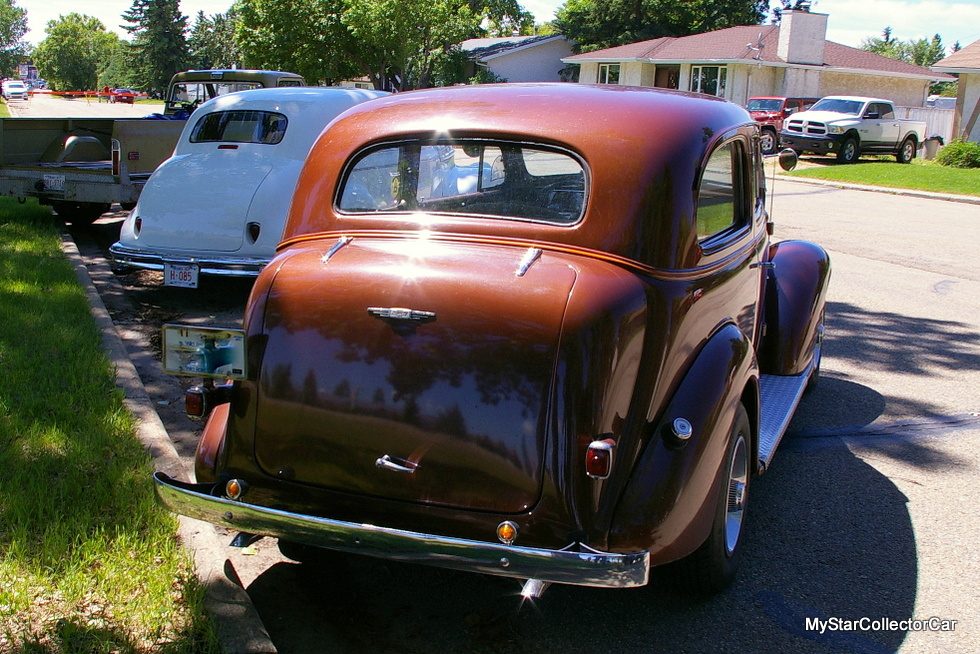 The upholstery was redone about 40 years ago and is still in very good condition while the moldings and dash are original in every way. 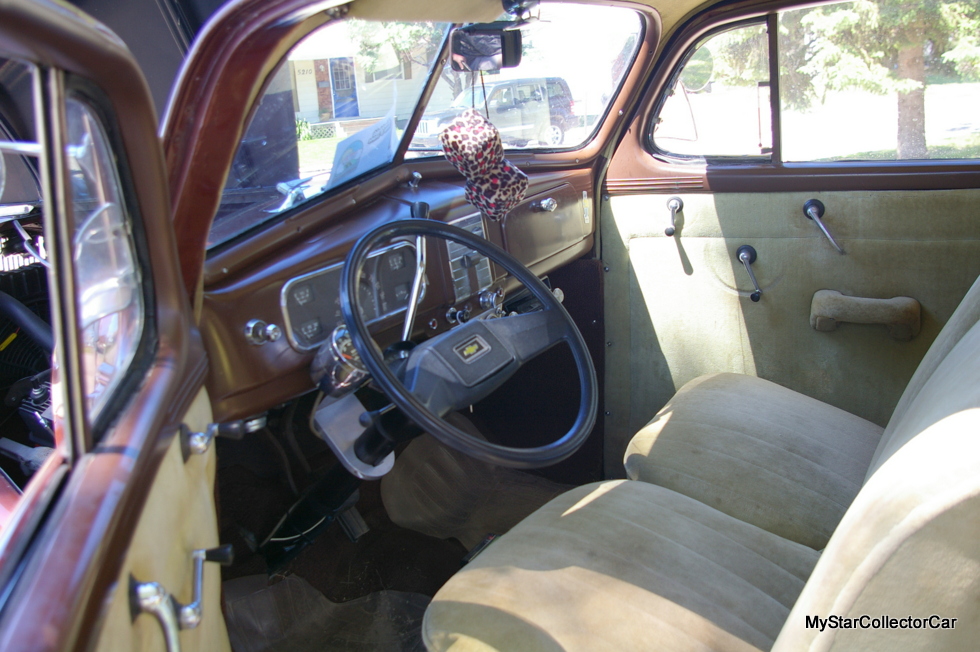 Marty intends to hit the open road this year and enjoy his Chevy this summer. He plans to add a 1957 Chevy heater in the future so he can extend his driving season into the fall and start earlier in the spring. 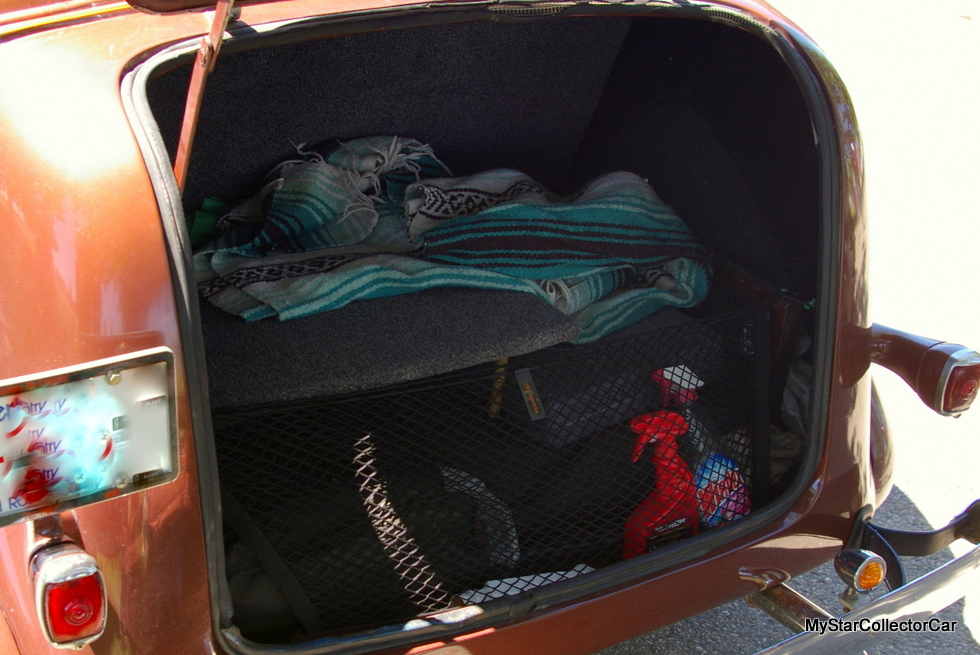 The 80-year-old Chevy now has plenty of horses under its stylish hood and Marty simply said “it goes” when asked to describe its performance. However, Marty is content to stay within the posted speed limits on the road and enjoy the journey.

He has plenty of journeys ahead of him in his ’37 Chevy and Marty looks forward to every one of them.