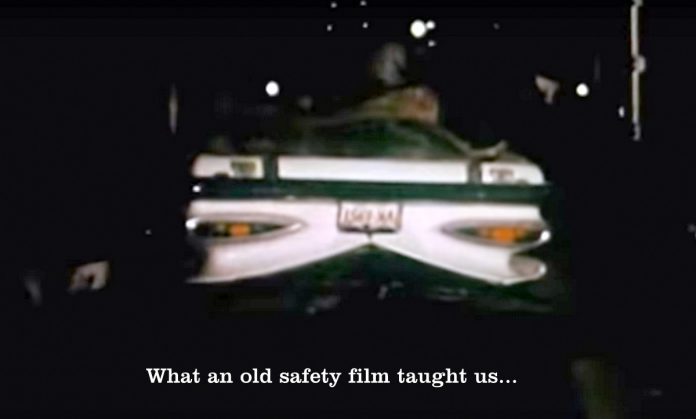 The car hobby lives in the past and that’s a good thing because the past is a very sentimental world for most people.

The past is comfortable, but it’s also make-believe when reality clashes with sentimentality.

Signal 30 is a great example.

Signal 30 was a film released in 1959 by the Ohio State Highway Patrol on behalf of the Highway Safety Foundation to educate high school students on the carnage seen in worst-case, fatal crashes. This was a pull-no-punches look at what happens when 50s iron meets other 50s iron – or trees in a head-on collision.

The term ‘Signal 30’ was their code for fatal crash although a few guys walked away after a massive impact – call it their lottery win for life. Most didn’t survive because the 50s iron exposed so many issues with old-school technology. Here are five things you can learn from Signal 30.

Number one is all about seatbelts. Most of the victims were ejected either (a) out the door or (b) through the windshield – after the impact they looked like horribly messed-up extras on The Walking Dead.

Some guys were halfway out the door while others were several feet from impact, but they all ended up looking like bloody rag dolls.

Number two is steering columns. The 50s steering column was built to look good and more chrome on the steering wheel told your neighbors you spent more. Unfortunately, the extra chrome was also a great way to spear your chest or impale your throat in a high-speed frontal impact.

Number three is air bags. The 50s iron had no air bag systems, but a number of these victims would have walked away from most of these crashes and virtually all of them would have made their next birthday with air bag and seat belt support.

Instead they became stars in a very messy piece of early reality TV after crashes that would be far less catastrophic in new iron.

Number four is 50s era A, B and C pillars. Late 50s iron – especially hardtops – had thin roof structures because designers were heavily into wraparound windshields.

A few guys in Signal 30 put their hardtops upside down at high speeds and the results were predictably bad. The cars were flattened down to their window sills and, in some cases, so was the driver.

Number five is crush zones. Crush zones distribute the impact better so the cars fold up under impact in a far less dramatic fashion before the driver’s compartment is impacted.

The concept is a lot like those safety barriers you see on major highways.

Signal 30 was a grim reminder of how far safety has come in the last 60 years but in defense of old iron, very few guys daily drive their classics. These cars see limited duty under ideal conditions – that’s why collector car insurance companies offer such good rates.

DRIVING DOWN MEMORY LANE WITH A SIXTIES SUMMER HOLIDAY