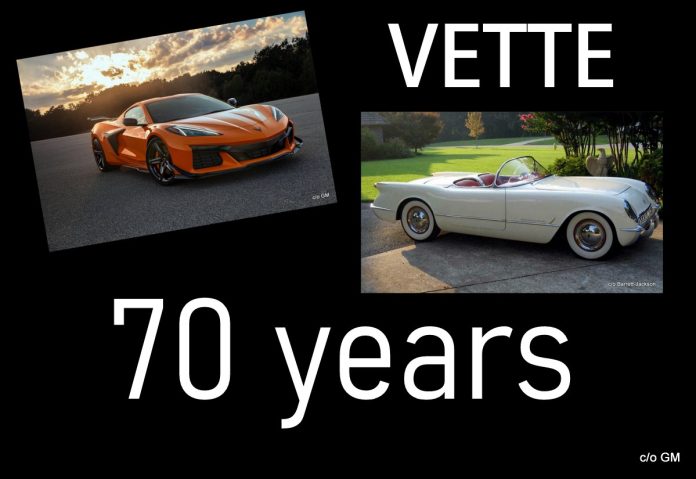 Few cars rocked North American car buyers like the Corvette when it debuted in time for the 1953 model year.

Consequently, a car with no backseat and limited trunk space was not an option for them, even though the ’53 Corvette clearly followed a highly elusive dream of an open road with a spirit of adventure that died a horrible death when an overly generous supply of kids entered their grim reality during that time frame.

Fortunately, a 1953 Corvette was not a pipe dream for a small sector of car buyers who were able to chase down Route 66 (and any other 2-lane highway for that matter) in the rookie version of GM’s famous sports car.

The ’53 Vette was a game-changer that introduced a domestic sports car to the North American market- but did this first Corvette change the game more than its much younger 2023 Corvette descendent? It’s a car guy debate that would inevitably lead to an enthusiastic fistfight because defenders of both positions in this dust-up would have solid grounds for their arguments in our opinion here at MyStarCollectorCar.

For the record, the 2023 Corvette C-8 (Eighth generation) is a 21st century monster that can run with every big dog on the planet-including rabid motorized mutts. The ’23 Vette is also the first mid-engine Corvette because its enormous power (495 horses in Z51 models) needs a perfect balance for optimum handling ability.

By contrast the 1953 Corvette offered a Blue Flame six-cylinder engine that was massaged to 150 horsepower in performance mode, a sizable number in the early 1950s, but not even remotely close to its 2023 counterpart’s.

Both cars are equipped with lightweight non-metallic bodies that heavily influence their power to weight ratios, but their massive horsepower differences give a huge edge to the ’23 edition. The result is an astounding 0-60 mph time of 2.8 seconds for the 2023 Corvette Z51, while the 1953 Corvette speed tests indicate it could hit 60 mph in roughly 11 seconds. Not exactly neck-snapping performance for the first Vette, but fast for 1953.

Bear in mind 70 years is a long time in automotive history so real horses would be the main competition for a time-traveling 1953 Corvette that landed in 1883. Therefore, it would not be a huge surprise to see a 2023 Corvette Z51 disappear in a big hurry during a street showdown with a 1953 Corvette because of automotive advancements in 70 years.

The 2023 Corvette is an incredibly fast and sleek machine that would look right at home on a Le Mans race course while it thumps on Ferraris and Porches. The 1953 Corvette was also a radical trendsetter that broke the mold in Big Three automotive direction because it was a two-seater fiberglass sports car that was an outrageous departure from the norm at the time.