The term “front nine” is a term that typically refers to the first nine holes on an 18-hole golf course but we at MyStarCollectorCar decided to apply front nine to the automotive world in a chronological sense.

We picked three decades from the past where major changes took place over the ten-year period and want to share our impressions with our readers, starting with the oldest decade in our trio: the 1950s.

The 1950s was a decade of major change within the automotive world because the cars got faster and grew large fins by 1959. However, the first few years of the 1950s were completely different from the back nine of the ‘50s in terms of style and performance.

The early 1950s cars were noteworthy in a utilitarian sense because they were built mainly for a pre-rock and roll era buyer who was likely in the early stages of assembling a large herd of kids in his family.

The early Fifties car style was sleeker and more advanced than its post-war predecessors’ style, but it was still a brick on four wheels in most cases. The exceptions to this cosmetic rule of thumb would be convertibles and fastback models from that time frame.

The overhead valve V-8 engine was not a huge part of the powertrain equation for most garden variety cars during the early 1950s. Instead, the buying public mainly chose six and eight-cylinder flatties (except for baseline GM models equipped with sixes) to power their econo-cars down the road during the pre-Elvis era.

The transition to more powerful engine choices became a big part of the final years of the 1950s because the early phases of the freeway system allowed drivers to rocket down the new multi-lane roads if they had the extra horses under the hood.

Cars from the early 1960s were also completely different from car from the later years of that tumultuous decade. The amputation of rear tail fins began to take hold during the early Sixties, while the late 1960s became famous for its big block muscle under the hoods and fastbacks in the C-pillars. The only fastback of note built during the early Sixties was the famous 1963 Corvette-give or take a ’62 Avanti or ‘63 Ford or two.

The 60s cars from the Kennedy era had plenty of horsepower choices available to buyers who chose to run at the front of the pack on the newly installed freeway systems that raised the bar on highway speeds, but monster performance was not as big an issue for cars compared to the latter part of the Sixties.

The style of a typical early Sixties car reflected the new decade in a big way because the vehicles were still loaded with plenty of chrome-if not fins. There were also plenty of rounded edges added into the style mix and the hoods became flatter on the front side so the cars could cheat the wind better than the earlier Nifty Fifties models.

The final addition to our MyStarCollectorCar list is the early 1970s. Cars from this era still relied upon brute force produced by massive horsepower big block engines-but the winds of change were beginning to blow in Detroit during the early Seventies.

Initially the changes meant a slight decompression in engine power for better mileage, along with an ability for some early 1970s cars to use new-fangled but less pollutive unleaded gas to help save the planet.

The neutering of the automobile took full effect during the early part of the 1970s when they were reduced to large cubic inch boat anchors with a giant decrease in performance and marginal increase in mileage. Heavy-handed nanny state laws also added ugly bumpers that would resist 5 mph crashes but initially looked like a kid-with-cheap-braces cosmetic curse on to the body style.

The transition from brute force muscle car to 98-lb weakling bumper car took less than five years to destroy the street warrior reputation during the front nine of the 1970s. The back nine of the 1970s was an extension of the same overzealous approach to cars, but at least the cars’ bumpers got more attractive and milked slightly more performance out of their engines.

The final legacy of the early 1970s was the 1973-75 cars were largely indistinguishable from the rest of the decade-unlike the front nine of the two decades that preceded the Me Decade. 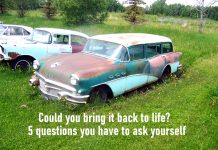 FIVE QUESTIONS YOU NEED TO ASK YOURSELF ABOUT A CAR PROJECT

THREE SONGS YOU WILL NEVER HEAR ON YOUR CAR RADIO WITHOUT...

FIVE QUESTIONS YOU NEED TO ASK YOURSELF ABOUT A CAR PROJECT