The Plymouth Road Runner ad in the May 1971 edition of Hot Rod magazine was designed to appeal to a young male driver with a lead foot. These drivers were not (then, now or anytime) the ideal candidates for car insurance.

High speed and inexperience are a pretty dangerous mix with the ten-feet-tall-and-bullet-proof philosophy of the average young male.

Good luck managed to trump good decisions for most of us in our misspent youth, so we managed to avoid death by really bad driving- well most of us anyway.

But the odds were against us when cars got more horsepower during the muscle car era. Simple economics were our only real deterrent because we simply couldn’t afford them.

Even if we could afford the cars, the insurance premiums would be a death- blow to the whole idea of a muscle car.

So Detroit tried to help out the young driver with a generous game of hide –the- horsepower with their big block muscle cars. They lied about the horsepower so insurance companies would insure a kid’s new street monster. 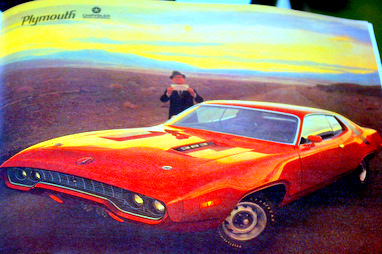 Eventually the insurance companies began to believe the manufacturers’ suggested horsepower documentation was worthy of a Pulitzer prize for fiction-or at least an “I’ll call you” award for 24 hour romance fiction in the hollow promise category.

But the gig was up by the time this 1971 ad appeared in Hot Rod. Young male drivers with Rats or Elephants under the hood of their newly purchased muscle cars were dying long before they made their last payments.

So the insurance companies called Detroit’s bluff on the really big blocks and made it difficult for a young guy to own a car that could kill them rather easily in a quarter mile with a sharp turn in it. 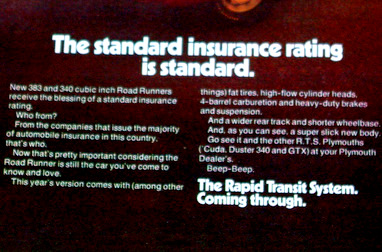 Chrysler decided to play within the rules and offered scaled-down displacement with the small block 340 and smallish big block 383 engine choices. These choices meant that a young driver could get a less expensive standard insurance policy.

The engine choices still offered more than enough horsepower to die on the streets tonight with your girlfriend named Wendy, but the insurance companies were pacified with the arrangement. So they would insure a kid with a hot car-just not a red- hot car.

In 1971, it was a very smart advertising angle for the boys from Chrysler.

More blasts from the past at https://www.mystarcollectorcar.com/

MYSTAR JANUARY 13 FIVE FOR FRIDAY: FIVE THINGS I’D LIKE TO...