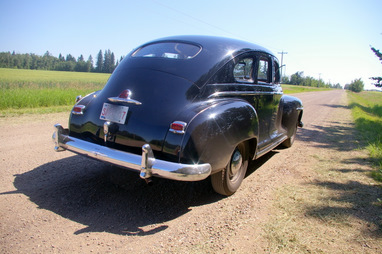 I have always had a soft spot for the post-war late 40s Detroit automobile look which looked eerily like the pre-war early 40s Detroit look.

‘You can’t send Cadillacs into combat zones and DeSotos made poor amphibious assault vehicles, so Detroit became lead manufacturer for the war effort in 1941.’

People just wanted cars in 1947 and supply fell well behind demand for the North American auto manufacturers. The 1947 market conditions must seem like a long lost beautiful dream for the former Big Three in 2009. Enough with the history lesson, I had a chance to test drive a very well preserved 1947 Dodge  with 38,000 original miles on it and I lept at the opportunity. The car was a time capsule; complete with rear suicide doors, front and back vent windows instead of air conditioning, and human arms instead of signal lights. 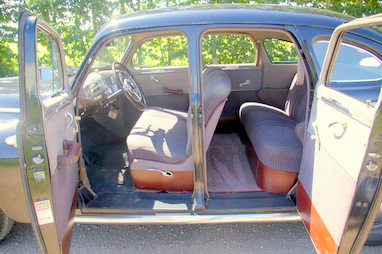 The car was built before my time but I remember hand signals and used them on my test drive. However this is 2009, so most people thought I was waving to them- kind of a “friendly stranger in the black sedan” moment in heavy traffic. It did have a centrally located brake light so I didn’t have to confuse people with that hand signal.The car had one feature found on many new cars- a push button start. I turned the key, pushed the button, and a mighty 100 hp flathead six cylinder beast of an engine roared to life. It had a smooth idle and it gave me a false sense of confidence about the road ahead of me.The actual owner did everything right because he is in the automotive repair business and prides himself on quality service. He was very careful about the right method to start the Dodge because the car had been out of action for decades, so he resurrected it after a meticulous regime of fluid, brake and ignition component replacement.So the Dodge purred after all of those years on the sidelines.

It was a very hot afternoon when I took control of this senior citizen and headed out on the street. I left behind my cell phone and every care in the world as we headed down the road together. This later proved to be a bad move but I did get a hike in that day. I wheeled out into traffic and the first thing I noticed was the effortless shifts with the “3 on the tree” manual transmission; as long as the direction was up in gears. Downshifts were a little noisier as 3rd to 2nd needed a little finesse, and 2nd to 1st required a lot of double clutch.I had a chance to test 40s era brakes when some idiot cut me off in traffic. The brakes worked great and so did the loud horn, as well as my middle finger traffic signal. I ran the car at a steady 60-65 mph on the highway and it seemed okay with the concept.Until the heat of the day wreaked havoc on the fuel system and vapor lock combined with minor grit in the carb and put us on the side of the road in dead silence. The Dodge was a radio delete model and I just couldn’t think of any happy tunes to whistle at the time. 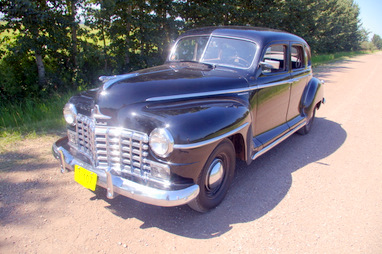 No cell phone meant a hike to a phone and the car came back on the end of a tow hook, but it was still one of the greatest test drives that I’ve ever taken in my life. I stepped back in time and had an opportunity to drive a vehicle right out of an era of post-war optimism when everybody still loved the Big Three.

‘It was well worth the trip and the time on the side of the road.’

HOW TO SURPRISE US HERE AT MYSTARCOLLECTORCAR