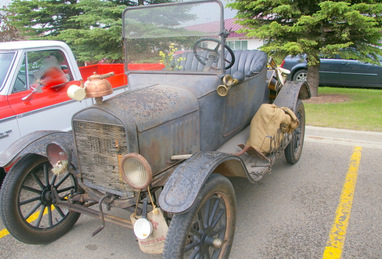 As we all know, Jed Clampett came into a little oil money on the TV show “The Beverly Hillbillies”.

Jed never liked to spend money so he kept the old truck instead of upgrading to a Rolls limousine.

‘Had Jed thrown some money around for a second car this 1920 Model T would have been the perfect candidate.’

Cliff Procter picked this car up from the estate of a Texas hot rod builder a few years ago.

In what has to be the first case in the history of the universe that a Model T was bought from a hot-rodder and de-customized, this car was taken back to its dirty 30s Depression era roots.It  took a year to get the old-timer to the point where it would pass a mandatory inspection because Cliff believes in very basic mods to a car so he fashioned a new front seat out of an old fur coat.

The sound system is a guitar strapped to the side, air fresheners consist of flowers in a vase on the dash and the tailgate party consists of moonshine jugs on the running boards.

This baby is all 1930s Depression-era business with a strong Beverly Hillbillies theme. 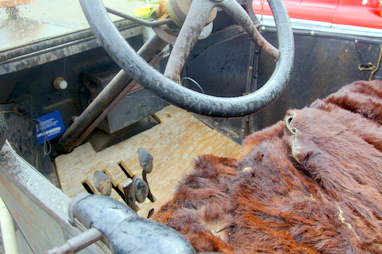 Cliff is completely committed to the bit so he took some brand new hickory spoked wheels and Clampett-ized them by spraying dull black over that great looking wood. Cliff knows these old “T”s from front to back and can carefully explain the intricacies of the crank start-the “how to set the timing so you don’t break your arm part” should be a required course for new owners of these old classics.

This is a fun car-Cliff doesn’t drive it too far but every mile puts a smile on somebody’s face. You can’t help but laugh at the bird’s nest in the headlight bucket but as the late, great Jed Clampett used to say “Weeell doggies that’s a fine lookin’ car”.

‘Thank you Cliff for showing us that it’s really all about the fun in the old car hobby.’