NOV 24 STAR OF THE WEEK: GAINERMOBILE-A TOYOTA CORONA WITH THE BIGGEST CULT FOLLOWING IN THE WORLD

This is the Gainermobile and it was the symbol of the cult known as the Saskatchewan Roughriders fan base.

A quick history on the Roughriders will tell you that they’ve been around since 1910 and they’ve won 3 CFL Grey Cup Championships. 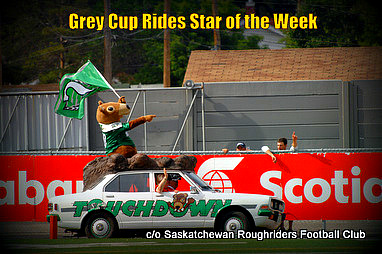 That’s not a great mathematical percentage but those are only dry statistics because this team has the best football fans in Canada and they loved this Corona.

The Gainermobile used to circle Mosaic Stadium in Regina Saskatchewan when it was still called Taylor Field and it always had one special passenger called Gainer the Gopher.

Fans used to go crazy when this tired old Toyota with the giant rodent sticking out of the roof did a lap around the field because that meant that the Riders had just scored a touchdown.

The place would erupt and this goofy looking mascot in this well used car was a symbol of everything that the Rider stood for because it was a humble expression of a big moment for Rider fans.

Time caught up with the Toyota so now it’s retired in a museum and Gainer circles the track in a new ride but the memories linger for the Rider fans who saw the Gainermobile in action. 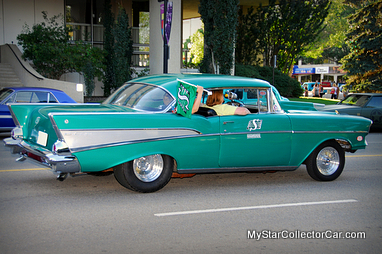 The Riders are hosting the biggest game today in the history of the club with the 101st edition of the Grey Cup. 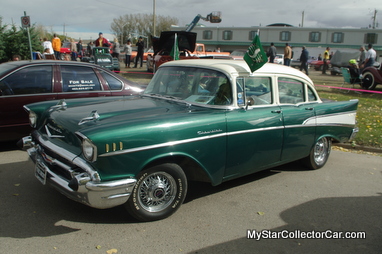 This is home field advantage to the tenth power in a place where everyone bleeds green and the goal today is win the big one in front of the most passionate football fans in the world.

Rider fans wear their hearts on their sleeves or on their classic rides depending on game day but one thing is absolute.

NOVEMBER 23 MSCC STAR OF THE DAY: ’60 DODGE-THIS IS HOW YOU SUPPORT THE TEAM 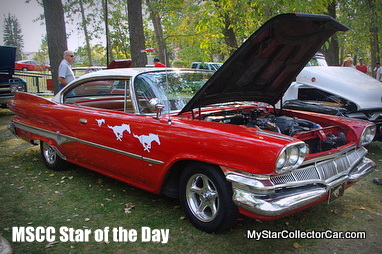 There are many ways to show allegiance to your team. The mildest form of support is when you wear a team hat or t-shirt.

The next step up is to dye your hair team colors or wear some kind of face paint that puts the spotlight on you as a dedicated fan of your team.

The next highest rung on the support ladder is a permanent tattoo of the team logo plus you can up your game in this arena by getting it put on your forehead.

The last and most spectacular way to support your team is to strip down to your shorts, paint yourself team colors and get arrested in -30 weather at an enemy stadium. 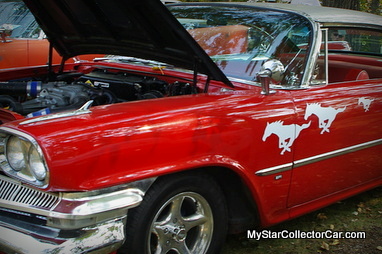 The coolest way (this was an add-on category) to support your team is to paint an extremely cool car in your team colors and fly the team logo on the doors and fenders.

This MSCC Star of the Day is a 1960 Dodge salute to the Calgary Stampeders of the CFL and it’s one of the best shout-outs to a team in the history of Exner fin cars.

MSCC STAR OF THE DAY: A WHITE DEFRANCE FIRETRUCK-THIS IS HOW YOU CELEBRATE A TD 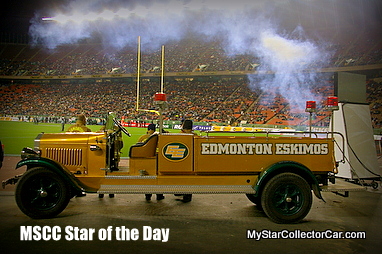 There are many ways to celebrate a touchdown in football.

There’s the understated “simply hand the football to the referee” celebration. That one exudes cool and it won’t get a taunting penalty but fans don’t dig it because it’s too understated.

You get more buy-in from fans when you spike the ball and get piled on by a wave of happy teammates. That’s more fitting-especially if your team just went ahead in the game.

The best way to celebrate a TD is to light up a vintage old White DeFrance firetruck and circle the stadium with lights flashing, sirens blaring and fireworks exploding.

That’s what the Edmonton Eskimos of the Canadian Football League do-it’s an MSCC Star of the Day touchdown celebration. 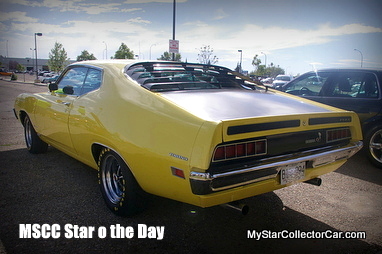 Any conversation about the history of Ford muscle always refers back to cars like the Shelby Mustangs.

The Torino flew under the radar but in reality, the fastback Torino took NASCAR (and the competition) by surprise on the track in ’68.

You could successfully argue that the ’68 GT spawned the NASCAR aero-wars in ’69 between the Dodge Daytona and the Ford Talladega.

The 1970 Torino Cobra GT was an extension of this war because these cars looked fast standing still and that monster 429 under the hood backed up the stance.

This MSCC Star of the Day was at a very large all-Ford meet back in 2010.

NOVEMBER 20 MSCC STAR OF THE DAY: HERE’S WHY AN OLD TRUCK MAKES SENSE

Most old rides get parked for the winter because they’ve earned it after a lifetime in the real world.

Cars like that did their time in the winter because the guys who bought them needed a full-time ride so the Challey was the only option.

Trucks are a different game.

They never really lose that workhorse attitude so that’s why this MSCC Star of the Day Chevy was still working hard in the middle of an early and brutal winter a few days ago.

NOVEMBER 19 STAR OF THE DAY: A DYNAMIC BRITISH DUO ON THE STREETS

British iron enjoys a cult following thanks to an army of people who love classic English rides.

Most of the focus is on cars like Jaguar XKEs, MGAs and Austin Healeys but in reality more people drove vehicles like this dynamic duo at a show back in 2010.

That’s a Bedford van and a Triumph Herald convertible.They were the backbone of life on the road back in the 50s and 60s in England.

That’s why they made MSCC Star of the Day.

NOVEMBER 18 MSCC STAR OF THE DAY: 1970 CHARGER RT-LAST OF THE SECOND GENERATION

The ’68 Dodge Charger blew people away with its incredible style so Mopar ran with it for two more years.

1970 was bit of an afterthought because rumor has it the 3rd Gen Charger was supposed to debut in 1970 instead of ’71.

History shows the delay wasn’t a bad thing because that gave the world this MSCC Star of the Day version of the 1970 Charger.

This RT was at a show a few years ago and there’s little doubt history was on the right track.