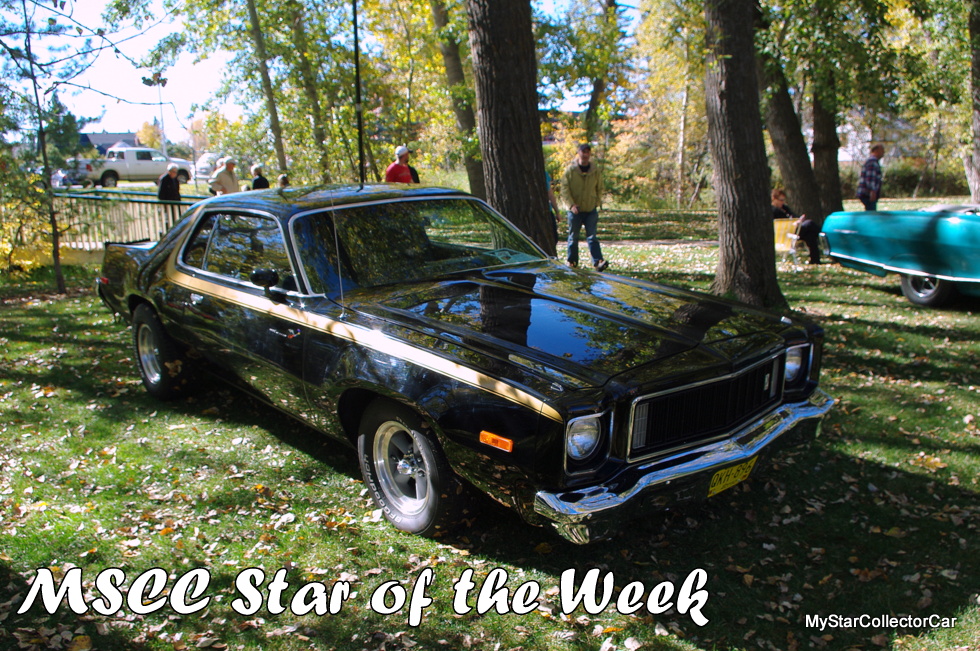 The Plymouth Road Runner was well-established as a legendary muscle car name by the time the Me Decade 1970s rolled in.

1971 was the last time the Road Runner had the mighty Elephant 426 Hemi option but the name continued on various platforms throughout the 70s.

The post ’71 Road Runners weren’t earth shakers on the street but they were definitely cool cars.

This MSCC Star of the Week ’75 Road Runner at a September show is a great example of Me Decade Mopar muscle. 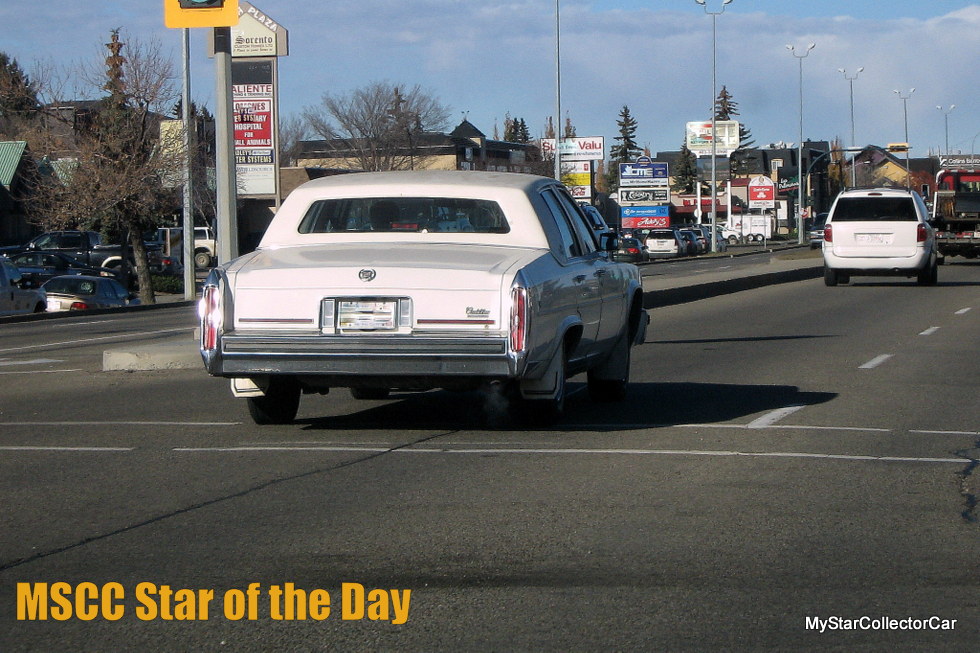 There are many ways to be inconspicuous in traffic if you’re a guy like 70s TV detective Jim Rockford and you’re tailing a suspect.

‘A giant white Cadillac isn’t the answer because this one was spotted several times yesterday in a city of 100,000 people and at no time was it inconspicuous.’

This was at one end of the city when the big Caddy made its first appearance. 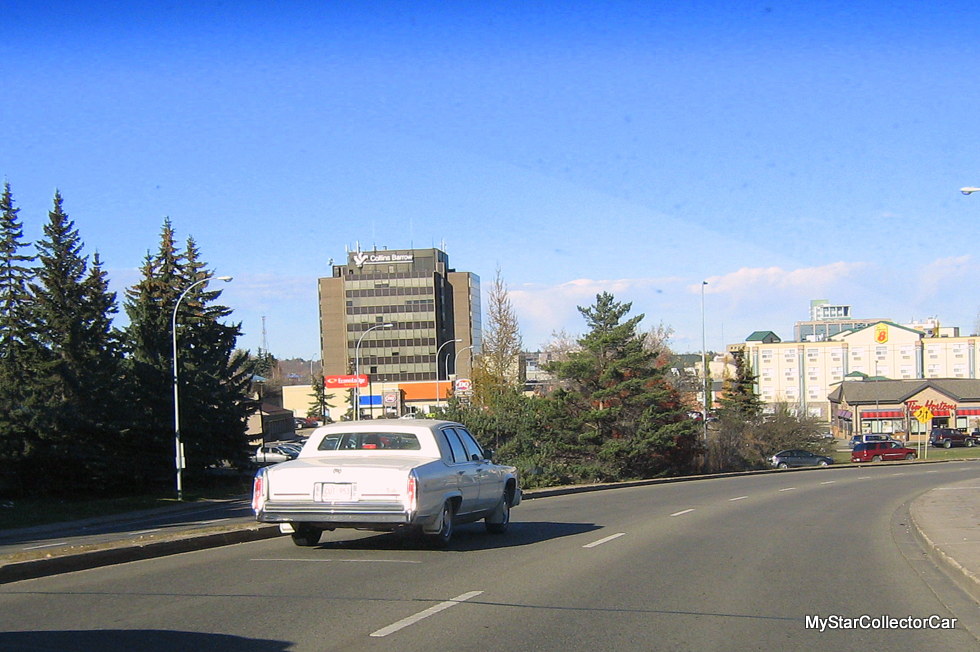 And this was the other end of the city when it made its last appearance an hour later in traffic. 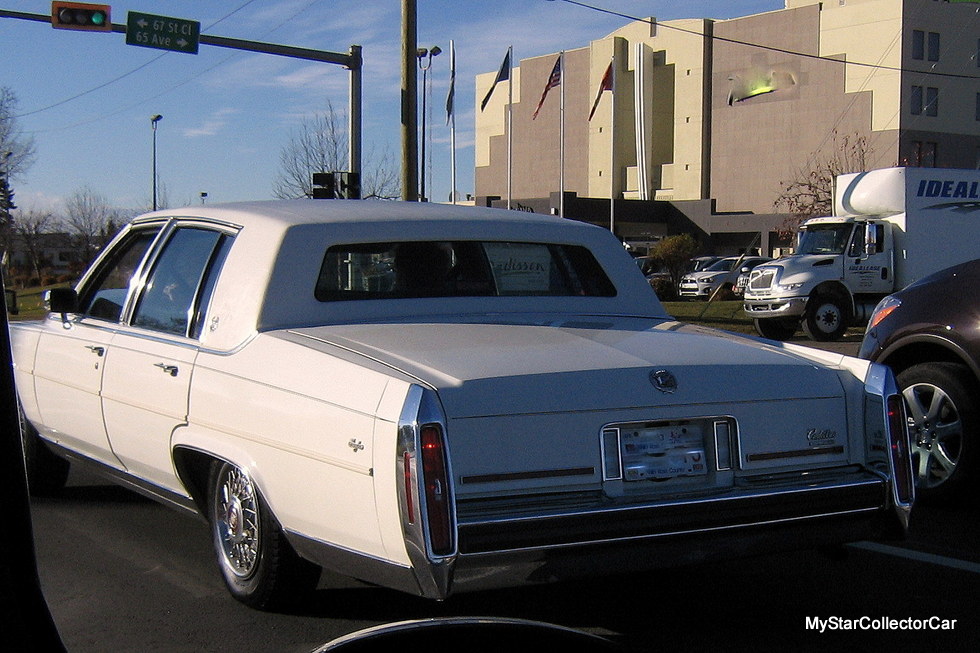 Today’s MSCC Star of the Day is a salute to a giant white Cadillac—the world’s worst undercover car. 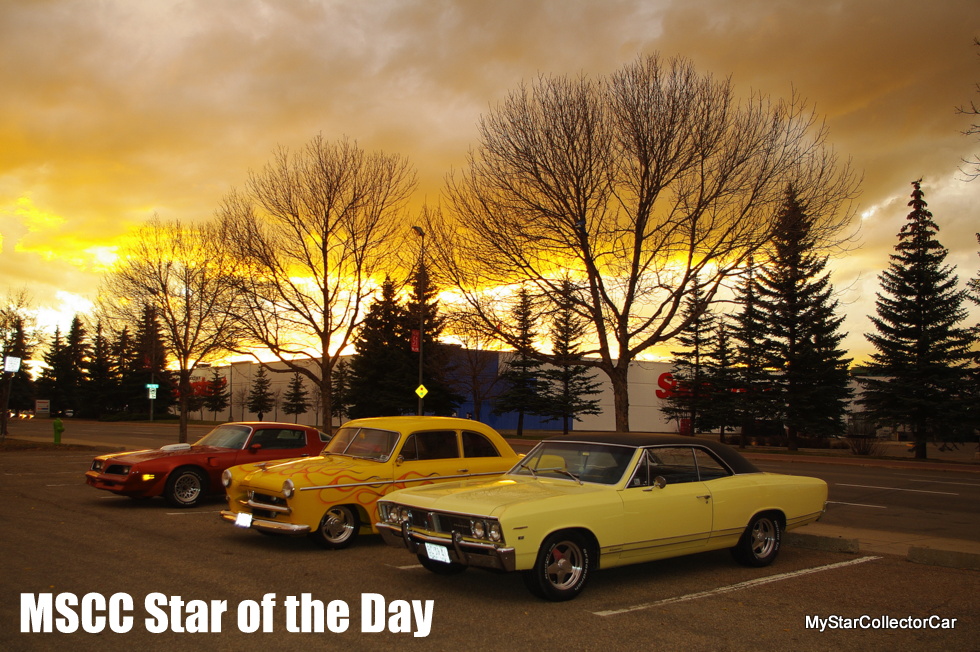 MSCC OCTOBER 23 STAR OF THE DAY: CAR GUYS UNDER THE COLOR OF OCTOBER SKIES

Van Morrison wrote the best fall song ever with the lyrics “Neath the cover of October skies” in ‘Moondance’.

The song is set in October and he nailed the reality behind an autumn night because winter is knocking at the door in the 10th month so the evenings get a little chilly.

‘Car guys know October is really pushing the envelope for the old iron so they tend to park them but a few diehards show up for a scheduled show every week until the snow tells them to go home.’

This MSCC Star of the Day is a collection of hardcore car guys out last night “Neath the cover of October skies”. 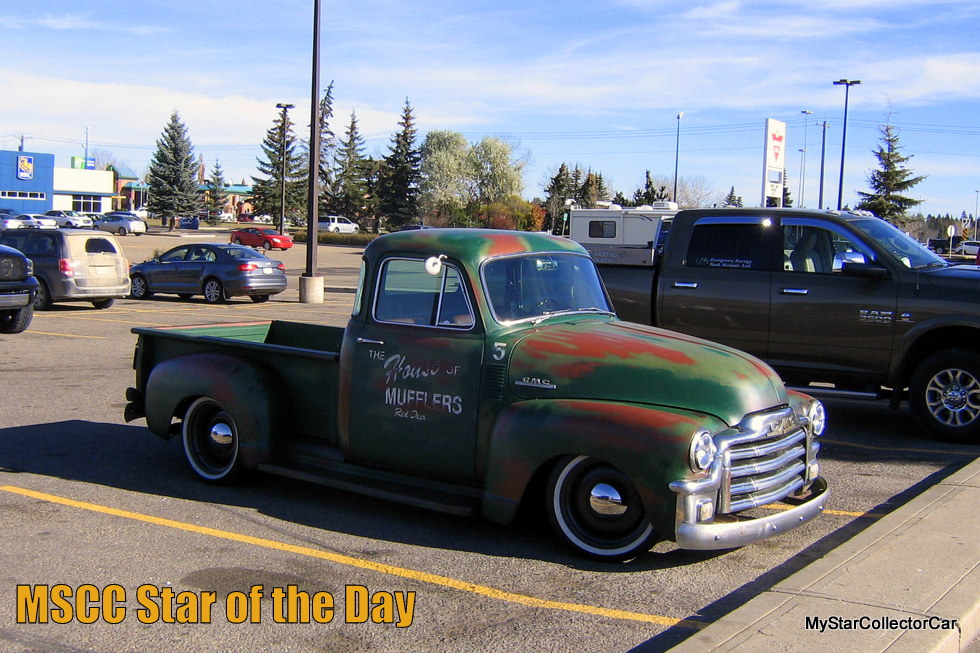 MSCC OCTOBER 22 STAR OF THE DAY: GMC TRUCK—PATINA WORKS ON THIS BEAUTY

“Patina” in the car hobby means an old ride that shows all the wear and tear of its years—the kind of wear you’ll see in a car that sat out in the back 40 under the sun and rain for decades.

It’s a catch-all phrase for everything from un-restorable junk to tastefully applied wear marks and rust by a skilled artist.

‘Patina is a great way to avoid the extra work found in solid metal work and a paint job so it’s a double-edged sword but it can work.’

This MSCC Star of the Day GMC truck in a parking lot yesterday is a great example of when patina works. 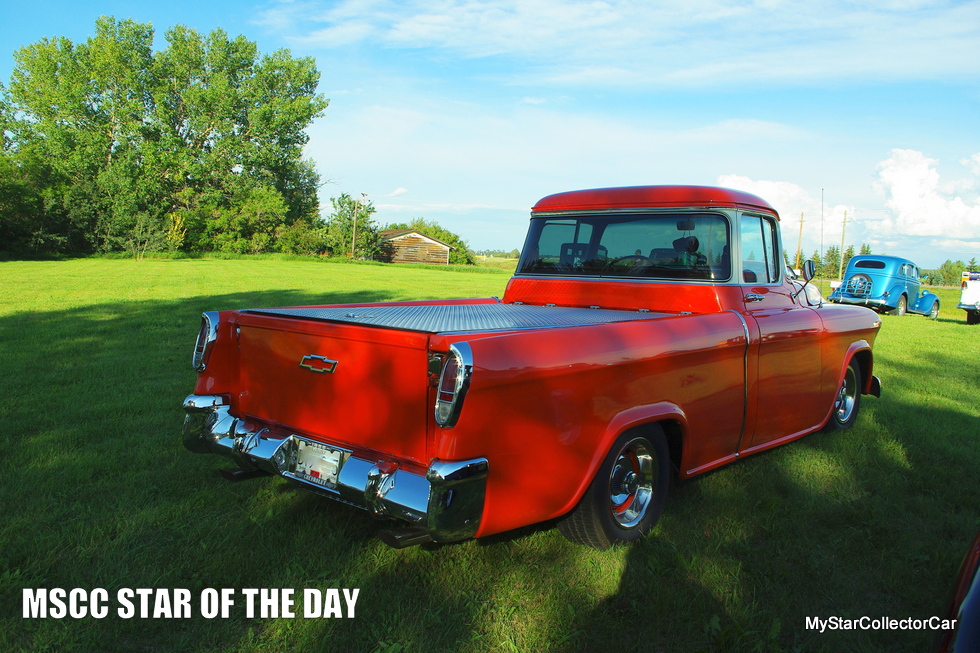 Trucks in the 1950s were pretty crude by today’s standards.

‘Few work trucks even had radios because a day at the job site or on the farm didn’t involve frivolous options like music.’

Trucks were brutally basic at best but GM decided to turn a few trucks into upscale rides with the introduction of the Cameo series.

This MSCC Star of the Day is a Chevy Cameo at a July show—the uptown version of a blue collar ride. 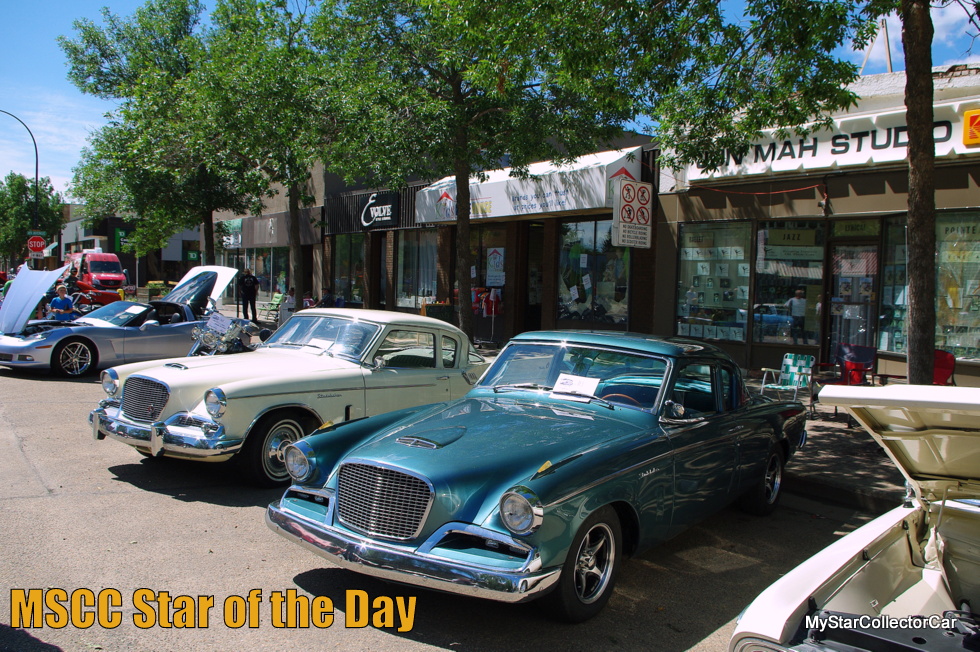 MSCC OCTOBER 20 STAR OF THE DAY: STUDEBAKER STYLE—UNDERRATED AND TIMELESS

Studebaker built some incredibly interesting cars over the years but their main focus was affordable transportation.

They started with wagons and migrated to electric cars before settling on the more conventional gas powered vehicles.

‘Studebaker never gave up ground on style in any era because they weren’t bound by large corporate thinking—just smaller budgets.’

This MSCC Star of the Day is a spotlight on two Studebakers at a July show because their style is underrated and timeless. 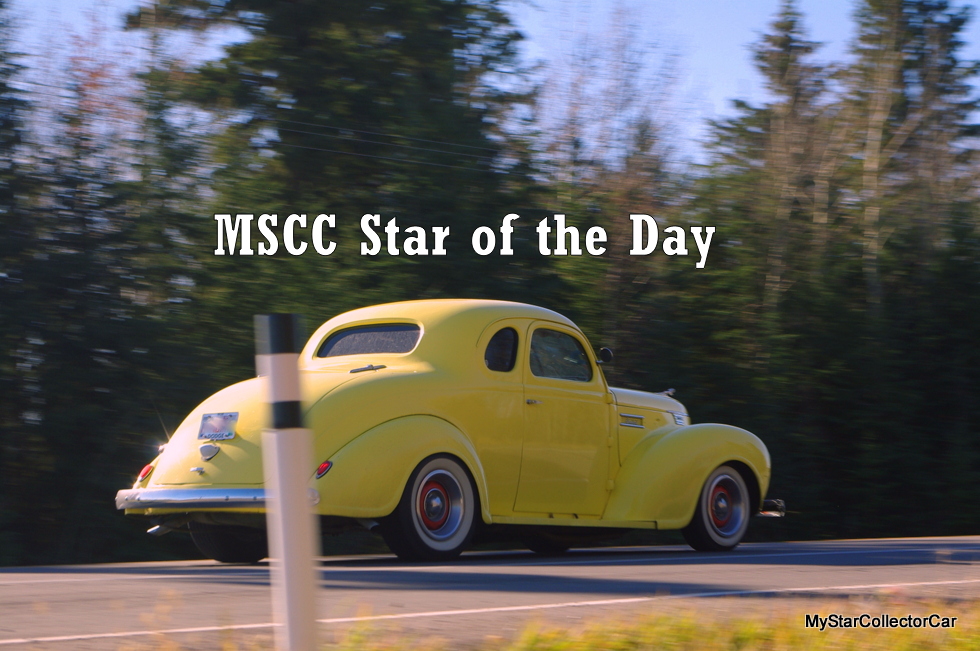 Secondary highways are often routed through some of the most scenic areas because there is literally no other route to take.

You can take the most efficient route but if the destination is off the beaten path, the road will take that same direction.

‘Car guys love the road less taken (secondary highways) because it’s not the destination—it’s the journey with old iron.’