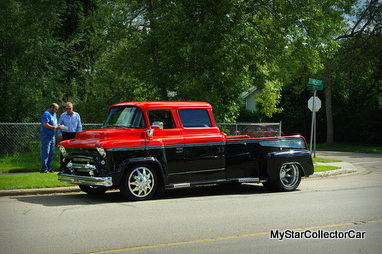 Both are large workhorses from a bygone era and were built for hard work.

The difference is the LCF has its engine placed slightly ahead of the driver instead of directly underneath the COE driver. 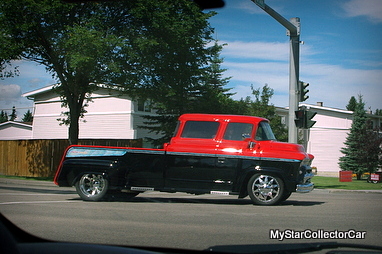 Obviously a 1955 Chevy LCF has a large-and-in-charge look that resembles a giant pickup with a steroid abuse problem. They are not common 60 years later because most of them got worked to death before their grim appointment with a crusher.

We spotted a stylish custom ’55 Chevy LCF in traffic and directed it to an unusual location: a wedding in a scenic park. 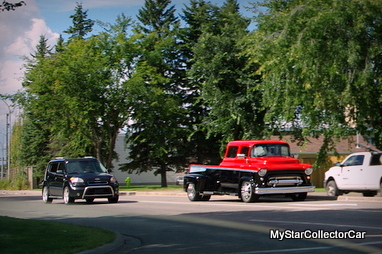 Owner Dennis Berreth and his wife were guests at the wedding and the GPS in their custom Chevy direction gave them bad directions. 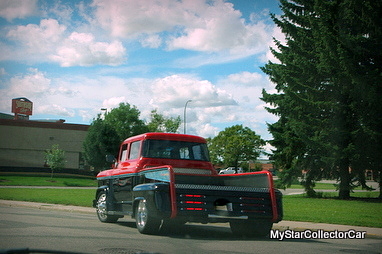 Clearly, it was the only flaw in this amazing truck because their Chevy LCF was a stunning example of what happens when a creative car guy with incredible talent tackles a custom project.

Dennis is one of those guys and he essentially built a brand new ride from a 60-year-old truck.

The project took him four years and he did everything except the paint, air-brushing and upholstery. In short, Dennis did the heavy lifting on almost 100% of the project. 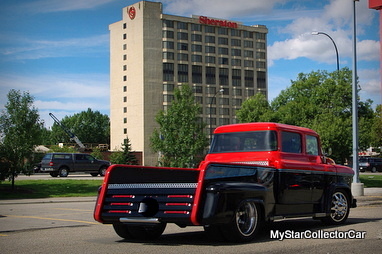 Dennis designed the truck for a practical purpose as a hauler and included a 2003 Duramax LB7 diesel in the mix to give the old Chevy a muscular new heart. Now the truck can easily haul a trailer at highway speeds according to Dennis. 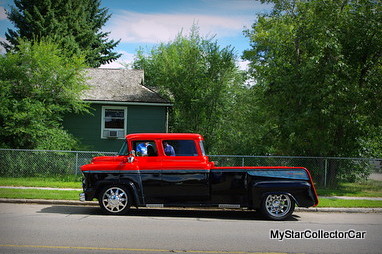 The truck now has air ride so it can now deliver comfort as well as towing capacity on a road trip for Dennis and his wife.

Other creature comforts in this high end resto-mod include air, tilt, Bluetooth and very comfortable upgraded seats with arm rests. In fact, the back seat folds down into a bed for a lucky passenger in the rear. Dennis added that “comfort is a big issue” for him on the road. 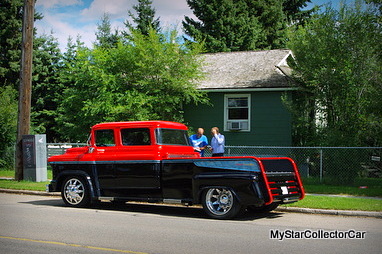 The Chevy cab has great sight lines for Dennis and the upgraded seats mean he does not get sore hips on long road trips. Dennis explained how he has “built a few hot rods” over the years and now includes a more comfortable ride in his builds. 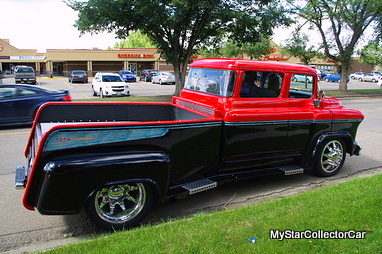 Dennis likes to drive his rides and his LCF is no exception; “I believe in driving ‘em- if you want a trophy then you should buy a trophy.” He added; “It’s got road rash, nicks and scratches because you gotta drive ‘em.” 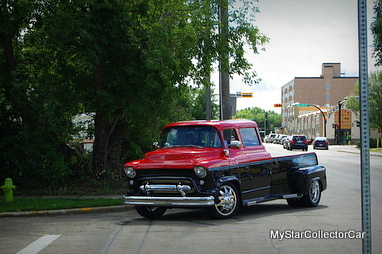 This 1955 Chevy does indeed get driven a lot by Dennis. It also becomes a big conversation topic and we almost made him late for the wedding because we had plenty of questions to ask him about this amazing truck.

Fortunately Dennis had all the answers because he was the guy who built this one-of-a-kind Chevy LCF custom.