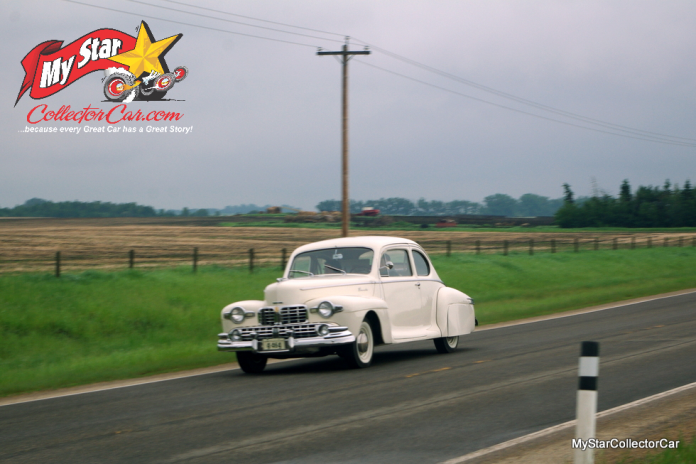 Henry Ford became famous and rich with his Model T concept; an affordable mass-produced automotive legend that put many ordinary people behind the wheel during the early 20th century.

The Lincoln Continental has always been associated with a higher end marque on the Ford food chain and the post-war world of the late 1940s was a part of the luxury legacy for the famous Blue Oval brand name.

Ralph and Brenda Christian are the proud owners of a well-stored 1947 Lincoln Continental Club Coupe that reflects everything that was beautiful about Ford’s stylish flagship that year.

Ralph wanted to preserve the originality of the Lincoln during his ownership–while adding subtle little touches that improved the overall presentation of the car and still retained its stock form.

Ralph recalled his first encounter with the ’47 Lincoln two-door when his neighbor was its former owner. Ralph is a low key car guy, but he was taken with the car in a big way and thought it was “a neat car” in his understated description.

Eventually, Ralph was able to pry the Lincoln Continental away from his neighbor about 14 or 15 years ago.

The Lincoln had plenty of body work completed before Ralph became involved with it, so he was able to concentrate on the mechanical and electrical part of the project.

The ’47 Lincoln still has its original flathead V-12 hooked up to a three-on-the-tree manual transmission in front of a Borg-Warner overdrive unit. Ralph wanted to mention the overdrive unit has electrical and hydraulic components that can gauge the RPM numbers in the tranny and add a better gear ratio to the Lincoln’s rear end when the situation requires higher velocity with less stress on the car’s powertrain.

In its own way, the unique Borg-Warner overdrive unit is a solid example of early smart automotive technology that precedes 21st century advancements by many decades.

The important part of the equation for Ralph was to retain the originality of the 1947 Lincoln Club Coupe, so he has an in depth knowledge of the 73-year-old car.

Ralph pointed to some of the luxury features on the car-including the power windows that are based upon a hydraulic lift system that is unlike our modern electric motor power windows in cars.

The Lincoln also a has a power antenna that is actuated by a vacuum system to initiate its up-and-down movement.

The luxurious Ford still has its factory windshield washer system that includes the two-quart glass container for the fluid.

The tail end of the Lincoln has been upgraded by Ralph and now sports brake lights in the taillights, along with the factory center brake unit. Ralph believes the backup lights located on the car were a dealer-installed option in 1947, so he is comfortable with them on the Lincoln.

He is also comfortable with his choice to use leather for the car’s seats because the material is a good addition to a luxury Lincoln model-plus he and Brenda are physically comfortable on road trips in the car.

They like to use their classic Lincoln as much as possible and Ralph had driven it to a car event an hour away from their home when MyStarCollectorCar interviewed him.

The car still purrs like a kitten on the road and Ralph is not afraid to hit 60 mph on the highway because he is confident in the 1947 Lincoln’s ability to handle the road-then and now.