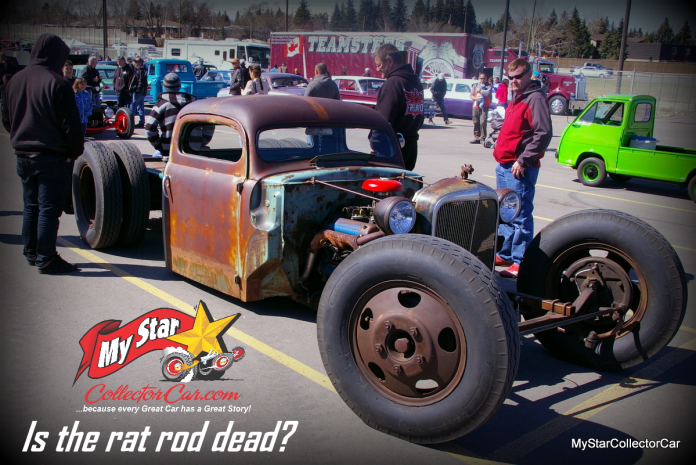 One of the true rock stars of mid-21st century car shows were the rat rods.

The rat rod was a primal force on four wheels that looked like it wanted to beat the living hell out of every other automotive guest at a car show. Rat rods were statement vehicles that sent out a basic vibe: steer clear of them and you might live a little longer.

Rat rods in their purest form of evil with a combustion engine looked like they were driven straight from a post-apocalyptic world of unchecked violence to the nearest car show.

Most of them were built with no attention to creature comforts like cushioned seats and classic Cadillac suspension systems. Instead they were equipped with license plate collections in their interiors, menacing gear shifts, and steel bomber seats.

They could rattle their occupants’ spinal columns to crippling levels of pain with a brief trip around the block-and leave them begging for death or the world’s best orthopedic surgeon after a 100-mile trip.

Rat rods were never meant for the faint-hearted or people who dabble in the black art of hypochondria. Famous tough guy John Wayne liked horses-or else he may have owned a rat rod if they were around during his heyday as a movie star.

The fact is many classic rat rods were regular pre-war vehicles during John Wayne’s younger years. The transformation into a rat rod was a process that occurred long after these ancient automotive wonders were long gone from the road in most cases.

Classic rat rods wore their history well. Their rust, dents and bullet holes were gathered over many years of hard use and post-retirement neglect that shaped them into a car guy’s platform for a resurrection that was an automotive equivalent of Dr Frankenstein’s monster.

It should be noted that Frankenstein’s creation and rat rods were both the product of boneyard theft and a vivid imagination.

The title asked the question about the good health of the rat rod after a stellar run only a few short years ago. Our position here at MyStarCollectorCar is the rat rod is still alive and well in the car hobby, but now it has evolved into a higher level of rat rod.

The early rat rods were thrown together in most cases and safety shortcuts were made in some cases. The philosophy behind a rat rod was to build an attention-getter on a tight budget that did not include a beefed-up frame to handle the giant horsepower boost in some cases.

The flimsy foundation for these hastily (and cheaply)-built rat rods meant an outdated frame built to handle a flathead four was pushed well beyond its limits with a giant engine transplant. The saving grace was the fact an early rat rod was too uncomfortable to drive on long trips and prevented the owners from sudden death due to their horrible engineering skills because an early rat rod was undriveable.