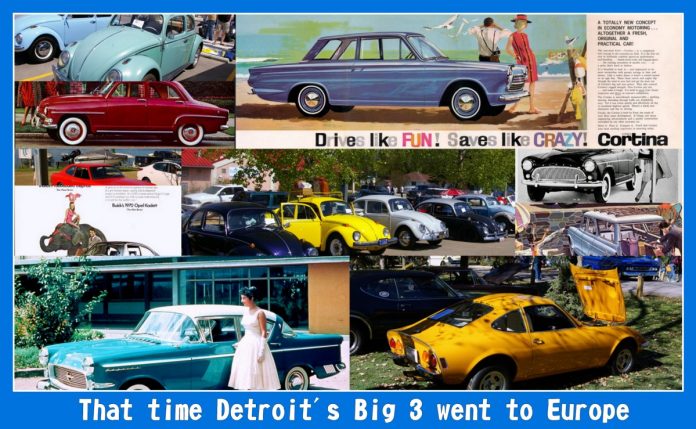 The history of domestic car production was largely (accurate pun) based upon the Big Three (GM, Chrysler and Ford) “bigger is better” mantra for many decades.

However, the impact of the Volkswagen Beetle did not go unnoticed by the domestic automakers because the homely little import from Germany staked a claim to the small car market in North America. The Big Three sounded the alarm and built the compact car in time for a 1960 debut as their answer to the VW intrusion.

The boys from Detroit also linked up with various European car builders so they could offer a comparable rival to the Beetle in their showrooms. Their European automotive allies included three models that played a role in the niche market dominated by the Beetles and coveted by domestic builders.

Chrysler Canada’s affiliation with France’s Simca models even preceded the 1960 introduction of the Valiant. It was a two-way street for the Mopar gang because Chrysler wanted to make inroads into the European auto market, so they bought a piece of Simca and eventually became the majority owner of the French car maker.

The Simca Super Deluxe was offered as a small car choice for Chrysler Canada during an era when their domestic models had considerably bigger horsepower, even bigger fins-and small MPG figures when compared to the Simcas.

Ford also dabbled in the small Euro car market when it offered the British-built Cortina models in North America as part of their 1963 Blue Oval lineup. The Cortina models offered a smaller sized car for Ford buyers- plus the car’s solid gas mileage compensated for its modest horsepower and made it popular as an urban-based second car for nuclear families with Blue Oval loyalties from that era.

The Cortina was unable to match the Beetle in terms of sales and eventually the little Brit was barred entry into US Ford dealerships (due to poor sales) in 1970, although the Cortina offered its newly styled Mk III models in Canadian Ford dealerships until 1973. The then-new Cortina Mk III models quickly gained a sketchy reputation and never gained a foothold in the Canadian market.

The days of the Ford Cortina ended in North America and now occupy a small footnote in the automotive history on this side of the pond.

GM jumped into the import car game with a few models, most notably the Opel from Germany. General Motors has a long history of business investment with Opel that continues to this day under various badges that are no longer branded Opel in today’s market.

However, the Opel flew under its own flag in the North American market for many years (1958-75) in GM dealerships, most notably the famous Opel GT, nicknamed the “Baby Vette” because of the little sports car’s Corvette style during its 1968-75 run here in the colonies.

An Opel GT is arguably the most famous Euro-based car model that made its way to North American shores to be sold at domestic car dealerships.

But the legacy of all European imports who brought a different automotive philosophy to North American markets should never be forgotten in the car hobby.