If you are very lucky, you get an opportunity to meet a childhood hero.

You get a chance to spend some time with a person who shaped a part of your life, even if he had no idea of his impact on your life.

George Barris is that hero for me and millions of other car guys who were just average kids in the 60s.

‘George Barris has worn the “King of the Kustomizers” crown ever since he was a 13 year old kid working on his first custom car, a 1925 ‘hand me down’ Buick, as George called it.’

The late stages of the Depression meant a serious budget crunch for a 13-year-old kid, so his first custom paint job was a hand-bombed house paint special.Pots and pans became hubcaps and the first Barris Kustom was born.

And thus began a legendary hot rod and custom career for a guy who knew exactly what he wanted to do early in life.

The industry has taken him deep into the celebrity world of Hollywood and entertainment. The difference is that George Barris literally created most of Hollywood’s biggest four-wheeled stars.

The list includes the who’s who of TV stars like the Batmobile, Beverly Hillbillies truck, Munster Koach, Knight Rider’s Kitt and a big list of other movie and TV cars. The real short list would be the cars not done by the King of the Kustomizers. 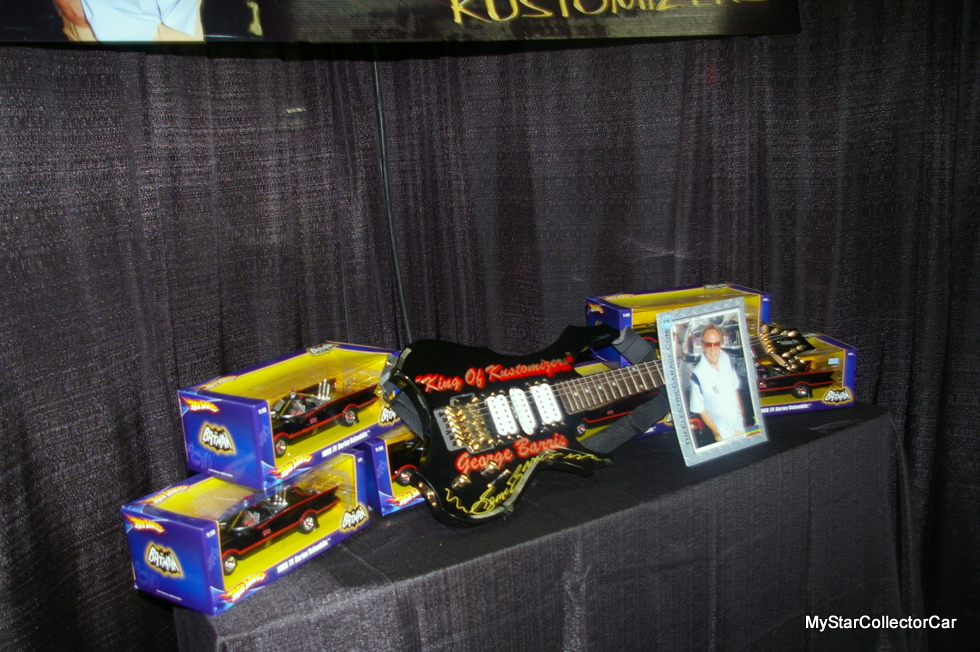 He has customized cars for people from Elvis to Sinatra to Farrah Fawcett to James Caan to Ringo Starr; to name just a few among a huge list of stars. And the stars came to George because of his talents.

It would be easy for anybody to get swept up in a world of self-importance and inflated ego if one had experienced George Barris’s life. Rubbing elbows with elite celebrities as an equal would have an effect on most people that could induce a big bad case of swelled head-itis. George Barris has no such affliction.

We were fortunate enough to spend part of an afternoon with George Barris and discovered something new about this legendary customizer: He is an even better human being than builder.

My brother Jerry and I introduced ourselves to Mr. Barris and were immediately comfortable with this easy-going and friendly man. Here was the guy who built many of the feature cars for our favorite TV shows of the 60s. We couldn’t wait for the next scale model kit to be released with the Barris Kustom Industries pedigree.

We have followed his cars and personal celebrity through all of these years from childhood to adulthood with an intense sense of awe. This man has been featured in every car publication and car show in the free world. He was the headliner at a car show and we were just part of a big and nameless fan base.

But that is not how Mr. Barris makes you feel when you talk to him. He had all of the time in the world for average guys like us. He is a very down to earth guy who clearly has never been caught up in the trappings of his personal fame. 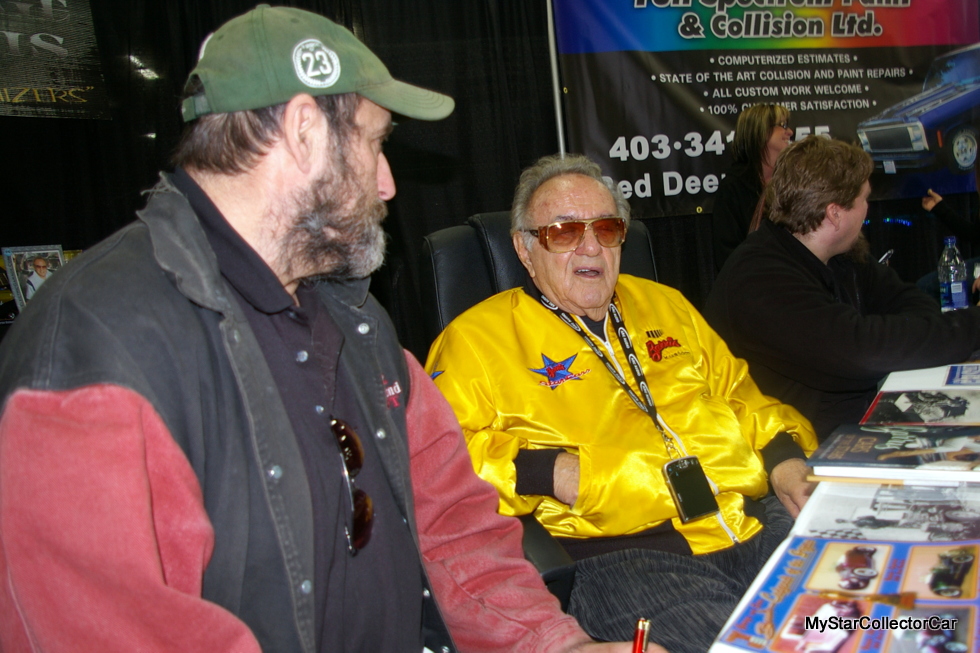 He had something good to say about every celebrity that ever did business with him and that is a very long list. A well-mannered Elvis was one customer who took the time to thank every guy in the shop who worked on Presley’s Cadillac. Elvis also took the time to get to know the shop guys on a personal basis.

Clint Eastwood did a favor for him that involved a scripted message and that was when George found out that Clint has a photographic memory.

George designed Kustom golf carts for both Bob Hope and Bing Crosby, and he thought very highly of the two famous Road picture/golfing buddies. It was clear to me that George Barris has a positive opinion about most people that he meets-celebrities or not. It is simply in his nature.

Today Barris Kustom Industries is a multi-generational family business that includes his daughter, son and grandson. The youngest member of the family business brings his computer skills to the table and George is highly impressed with his grandson’s ability to use a computer in the custom business. His grandson clearly has George’s genetic code for custom and the young man has designed a scaled-down Peterbilt that will ride on a regular truck chassis.

One of the biggest advantages that George Barris has is his ability to identify with the average car guy. He sympathizes with a guy that has been priced out of the custom car world, so he decided to produce an affordable Barris Kustom”Spirit” Camaro with the average guy in mind. . A Barris Kustom “Spirit” Camaro can be special ordered through General Motors dealerships.

Barris Kustom Industries has already customized several hybrids and plans to utilize the designs for more projects as George and his business adapt to the 21st century world of custom cars. George has always been ahead of the curve and he has no plans to abandon that solid game plan at this point in his long and brilliant career. Anything is possible for the man who managed to change “custom” to “kustom” to suit his vision of the custom car world.

George Barris only has one bone to pick with modern technology: He feels that modern computer- heavy cars have gained too much control in the actual operation of a car. He sees a downside to the technology and feels that “people should run computers and not vice versa”. Recent car tech issues would back up George on this argument. 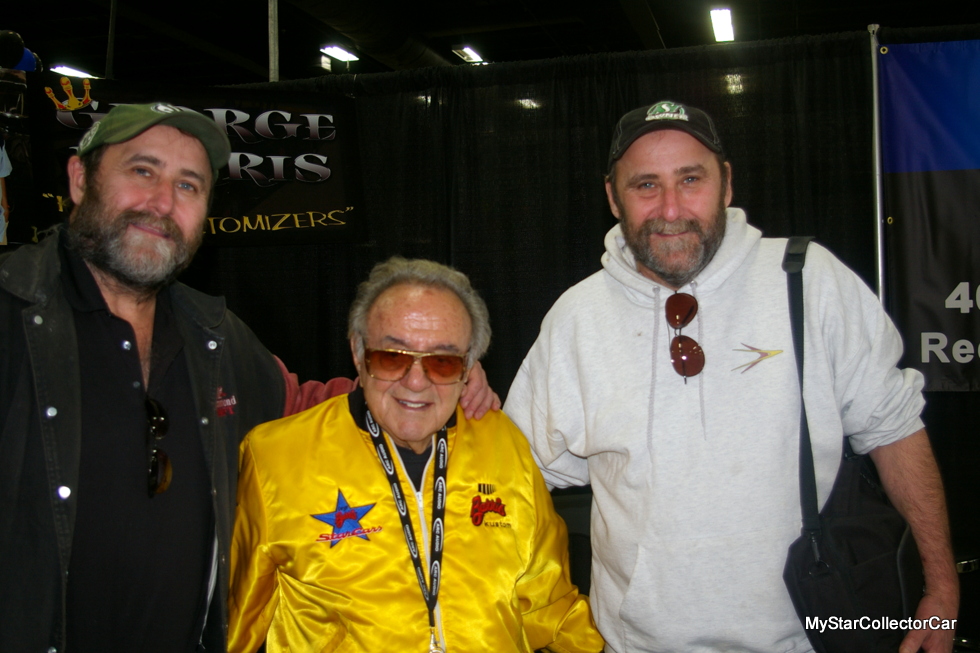 But he had already given my brother Jerry and me one of the biggest thrills of our lives: A chance to meet a legend and personal hero. And the man lived up to the legend and then some.

Thank you Mr. Barris; it was an honor to meet you.

DENNIS:”I know exactly where you’re at. I met Don Garlits at his museum a few years back.”