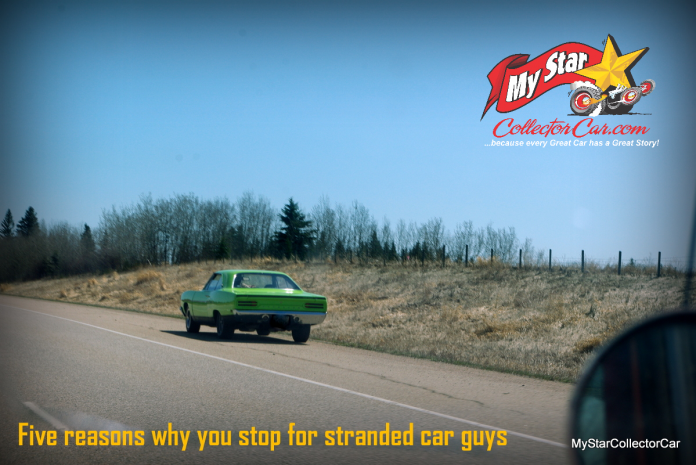 The key to a car guy adventure is found in the uncertainty you face every time you hit the road as evidenced by this stranded ’70 Road Runner on the side of a busy highway a few weeks ago.

The Road Runner’s problem wasn’t obvious from a 70-mile-per-hour view but it sure was when you saw what was beside the classic Mopar on the passenger’s side. The driveshaft had an exploded u-joint so it was clear why the Runner wouldn’t run. The only option was a quick phone call for a tow truck so the driver had it covered plus it was his dad’s car so he broke the bad news to him while he waited.

The first reason to stop was because it was a cool car. This was a lime green ’70 Runner so it stood out like a neon sign. At minimum, you get a chance to see it up close and get a warm reception from the owner instead of “why are you hanging around my classic Mopar?”.

The second reason is because you may be able to help solve a simple problem. Maybe it’s out of gas, low on water, vapor-locked or it just needs a boost. Those are pretty easy fixes and they involve low-tech solutions.

The third reason is you might have the pieces to solve a more complex problem. For example, you have a fan belt in the trunk that may fit with a few modifications like running it directly to the water pump and skipping the add-ons like the alternator, power steering and air conditioning. Or you have the right wrench for a stiff lug nut. These are the things that make you a hero.

The fourth reason is you may know a lot more than the stranded guy, so there’s a chance you could save the day with accurate troubleshooting. Maybe it’s just a loose wire on the starter or a flooded carb bowl, but solving it makes you a hero…yet again.

The fifth and best reason is simple – it’s the right thing to do. We’re trying to run a civilization and the key to a civilization is a simple act like helping a fellow human being out – especially when it involves classic old iron.  One more condition – don’t be the Ford guy who whips by a stranded Chevy and laughs because it’s a broken-down Chevy. This isn’t like a religious war or being on the right team – it’s about being a good guy.

AUGUST 2018: 1959 DODGE VISCOUNT TWO-DOOR HARDTOP—EXNER HAD A CANADIAN SIDE