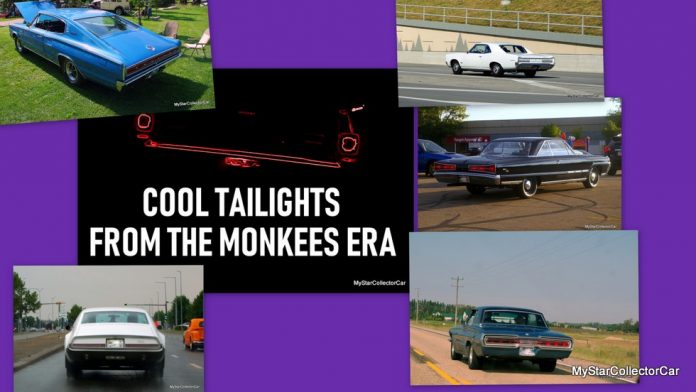 Most people see the 1966-67 period as the legendary Beatles era.

They went into the studio and came out with albums that redefined music and created songs for the ages.

The Monkees were another story but they also debuted in an era when the Swinging Sixties really started to swing—so did Detroit with some really cool tail light treatments.

The Monkees era started in 1966 and that’s the same year the first Gen Charger hit Dodge showrooms. The Charger was a beast on the NASCAR circuit so the tail lights were all drivers would see—if the track Charger had tail lights.

Stock Chargers had incredible tail lights and if you ever saw one at night you knew what it was because these Mopar B-bodies lit up the road in 1966. You were living The Monkees ‘Daydream Believer’ dream.

Ford Thunderbirds also lit up the night in 1966. The Flair-bird era (1964-66) introduced sequential signal rear signal lights in ‘65 to the Thunderbird.

That was pretty cool but the ’66 T-bird took the game up with a full lighting package right across the rear of the car. A full strip of lights was a badge of honor in the Monkees era and the Thunderbird pulled it off with flair—as befits a Flair-bird. The perfect car to catch The Monkees ‘Last Train to Clarksville’.

GM didn’t want to be left behind so they debuted the cutting-edge, front-wheel-drive Olds Toronado in ’66. Front wheel drive was the exclusive domain of foreign iron back in 1966 so this massive Olds was a big statement from General Motors.

The full-width rear tail light (punctuated by the license plate holder)was the icing on the cake for this Monkees era classic. The Monkees sang about a ‘Daydream Believer’ but you were definitely living the dream in a ’66 Olds Toronado.

The 1966 Dodge Monaco was another example of classic 60s cool tail lights. Your neighbors could tell you didn’t buy a low-end Polara simply by seeing your Monaco parked in the driveway—the tail lights were a dead giveaway you didn’t cheap out on the order form.

Call it a textbook case of class distinction but these Monacos told the world—especially at night–that you were driving an upper-end Dodge. You actually lived in the place The Monkees talked about in ‘Pleasant Valley Sunday’.

GTOs need no introduction because they were muscle car legends but two of the things that really worked on 1st Gen GTOs were the tail lights. The tail lights on a Goat were a lot different than those found on a lower-end Tempest.

The GTO had 3 strips of red tail lights on each side and that’s a good thing because it looked cool plus it gave the guy you were racing something unique to ponder as you pulled away. The Monkees had a song called ‘I Wanna Be Free’ and a ’66 GTO definitely gave you freedom.