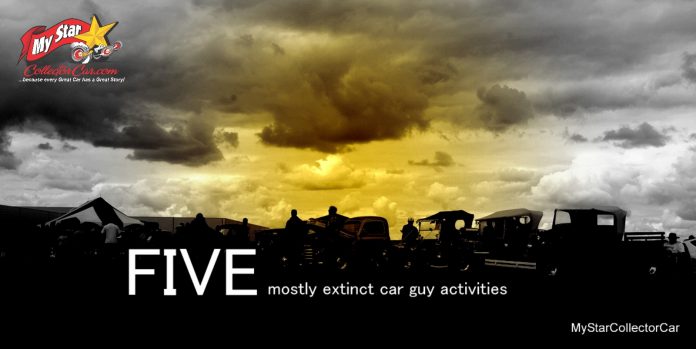 Recently, I witnessed what could only be described as an automotive version of a passenger pigeon moment.

Just to clarify, passenger pigeons were a bird species native to North America that were extremely plentiful until they were wiped out by overhunting and habitat destruction by the turn of the 20th century. Presumably they could not adapt to statues, monuments, and buildings as bombing areas.

I drove by a new truck towing a new Jeep with a long strap and realized I have rarely seen this activity in today’s world. New Jeeps can be flat-towed because their transfer cases can be put in neutral (even with an automatic transmission) thus allowing them to be pulled down a road. However, witnessing a flat tow of any vehicle behind another vehicle via a rope, chain, or strap is highly unlikely in a Loch Ness monster sighting kind of way these days.

The second addition to my gone-and-possibly-forgotten car guy list is the manual transmission. There was a time when most old vehicles had standard transmissions in them, particularly trucks and cheapskate edition cars. The result was most people knew how to shift a car manually through the gears to get from Point A to Point B, including the legendary three-on-the-tree (3-speed manual shifter on the steering column) models.

However, older drivers from a bygone generation should not be forgiven so easily if they have not mastered the fine art of the manual transmission because they lived in a world where shifting was a requirement in many vehicles. These people should wear their inability to work a standard transmission as a badge of shame.

Which brings me to my third point: people who knew how to use a manual transmission had a golden opportunity to bypass a wonky starter, frozen engine, flooded engine, or any other circumstances where they could get the vehicle rolling (push, pull, or hill), turn the key to the start position, and pop the clutch to start it.

It was not a fail-safe solution, but a manual transmission gave the driver a sliver of hope in a bad situation. Years ago, a standard transmission gave one guy I knew an opportunity to wait until his next paycheck to replace the starter on his crappy car when he parked it on a nearby hill so he could drive his lemon to work.

Most new age drivers are highly unlikely to understand these old school signals, so I would advise any driver who is behind the wheel of an old vehicle to brace for impact if he uses hand signals. Pro tip: most drivers will think you are waving at them.

The fifth and final car guy activity on my list is a manual choke. Manual chokes on carburetors were reasonably common during a bygone era. Most owners learned how to use them through a trial-and-error process, with heavy emphasis on the error part of the equation when things did not go well for them.

Carbs boil down to a fuel, fire, and air mixture to create an explosion, and a choke is necessary to regulate the air volume during a cold start. A manual choke included the drivers in the process and required them to adjust the choke accordingly while the engine warmed up to a running temperature.

It was a somewhat complicated process, but most drivers learned how to work the choke because they had no choice. However, a manual choke did involve some mechanical finesse and gave owners a sense of satisfaction when the vehicle fired up. My own experience included a 1970 Dodge ½ ton with a manual choke that would start-even when every other vehicle was simply a large block of lifeless ice. I most assuredly felt a sense of accomplishment, along with a sense of smugness, whenever I fired up that old truck in sub-zero weather.