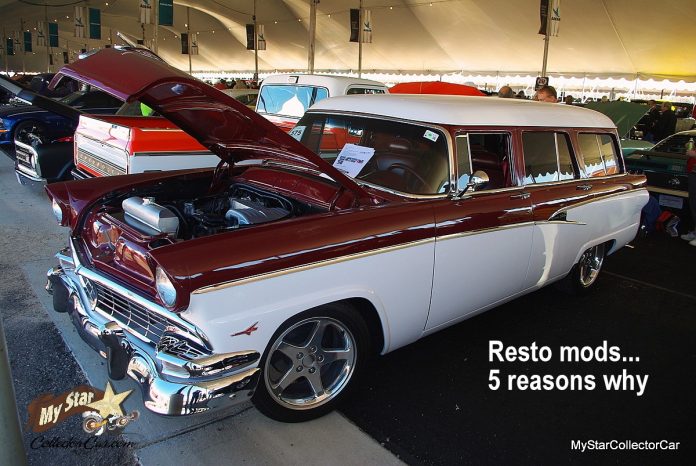 True confession here: MyStarCollectorCar leans heavily toward the concept of originality when it comes to old cars and trucks, mainly because we are old enough to remember many decades of vintage rides from our younger years when the old vehicles were new out of the box.

The net result of a major mechanical makeover is labeled a resto mod or pro touring ride, depending upon the degree of new age engineering added to the vintage vehicle. The simplest explanation is a resto mod is a milder form of altered vehicle that stays closer to the original essence of the old ride, while the pro street versions are heavily modified mechanical monsters that are built to destroy their competition on the street or track.

MyStarCollectorCar will put forth five good reasons why resto mod and pro touring versions of retro rides are a good idea for car guys in 2022.

The first reason is the value of a modified vintage vehicle has gone through the roof over the past few years. In fact, a pro touring ride done to the highest level of performance and style will even surpass most original versions of the same car or truck in terms of value at a high-end auction.

The otherworldly high price trend is most notable in popular vintage car models like the Corvette and Camaro, along with vintage pickup trucks and sport utility models like the early Broncos.

Smart car guys will describe their heavily modified vehicle as an investment that will rise in value after completion- and they will be mostly correct. But only to a point, because the true cost of a major resto mod/pro touring investment may not be a large part of the financial discussion between a car guy and his reluctant bride.

Our third point assumes the car guy has avoided a grim appointment with a divorce lawyer during the discussions about the second point when he defended the wise investment angle. MyStarCollectorCar’s third angle is the shock and awe factor on the street.

A heavily-modified vintage vehicle still looks basically like an old vehicle in many cases, but they have become a young wolf in an old sheep’s clothing and will ambush their rivals.

Our fourth point is the cool factor in an old ride. The basic rule of thumb is vintage vehicles are inherently cool because of their retro style, a rule that is undeniably true for us here at MyStarCollectorCar.

However, a modified retro ride done properly may indeed elevate the old vehicle’s original style to the highest level of cool-osity. All it takes are heaping helpings of talent and creativity.

MyStarCollectorCar’s fifth and final point in favor of resto mod or pro street retro rides is brutally frank: there are plenty of car guys who are unwilling to sacrifice 21st century performance and comfort to own an old car or truck.