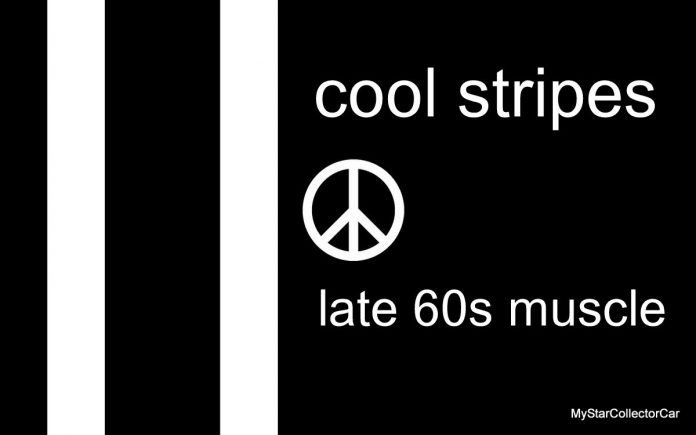 Stripes became a big thing in the late 60s because a cool stripe package separated you and your car from the other boring guys.

Here are five of the coolest factory stripe packages from the late 60s–they told the world and the guy in the next lane at the traffic light that your car packed a punch.

The 1968 Dodge muscle car lineup included the legendary “bumble bee stripe” option. Some Mopar guys hated it and ticked off the delete option, but most Dodge guys were proud to wear the stripe.

Perhaps the finest example of this stripe was found on the legendary ’68 Charger. It was a subtle, but effective way to show the world your Charger was all business, and it was ultra-cool. The Charger stripe was a spectacular option on this legendary car, and it set the muscle car tone for the rest of the decade.

The 1968 Camaro RS/SS was another version of the bumble bee stripe, but Chevy put it on the front end of the car.

That turned out to be a great idea, because an RS/SS Camaro didn’t need a lot of advertising, but a cool little stripe wrapped around the nose of a car with 396 big block was a great preview of coming attractions to scare off most challenges.

The 1969 AMX was AMC’s entry into the 60s performance world, and they decided to go with an old-fashioned, double stripe right down the length of the car over the hood, roof, and trunk.

The AMX was the perfect canvas for this 60s era racing stripe and the little car backed it up with serious performance. A lot of guys found out that racing stripe was the real deal when they took on an AMX back in ’69.

Ford went in a different direction back in ’67 with their Mercury Comet Cyclone GT. This Comet was Mercury’s answer to the Ford Fairlane GT and both cars were built to duke it out with cars like the Pontiac GTO, Chevelle SS 396 and Plymouth Belvedere GTX.

The Olds 442 was an instant legend when it debuted in 1964. The 442 badge was usually enough to scare off would-be challengers back in the 60s, but Olds wanted to get into the 60s stripe game–and they did in 1968.

Olds chose the cowl for their stripe, and it was the perfect spot for these iconic muscle cars. The stripe looked like a belt, but the real belt was the punch in the mouth the ’68 442 gave its competitors on the street.