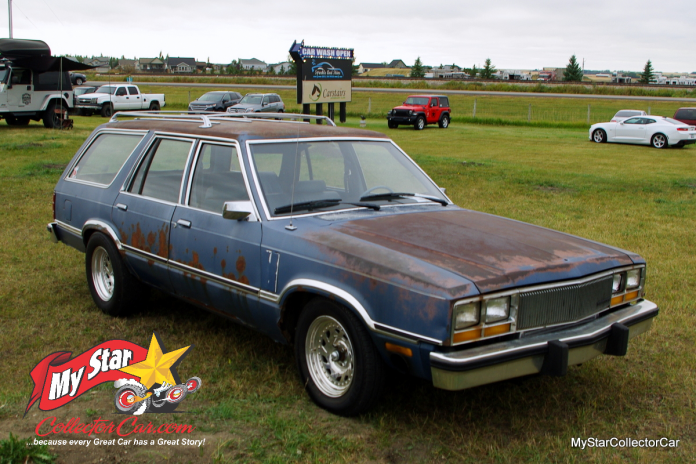 Field cars typically don’t have the brightest future because their fate is sealed the day they get shoved into the back 40 acres.

Occasionally, a field car gets rescued – mostly for parts, but some have a better ending.

In this case, a better and much faster ending.

Mitch Anger found this well-weathered, 1980 Mercury Zephyr wagon in a field and picked it up for 500 dollars. He had a few reasons why he wanted the long roof but the biggest one was its Fox-body platform. The Mercs had the Fox-body a few years before the legendary Mustang Fox bodies hit dealer showrooms and that was important to Mitch.

The Fox-body platform is compatible with most parts searches, so the Merc looks different — but under the skin they were basically the same car. Mitch was really going after the “aftermarket support for Fox-body cars”, because that’s a big part of his blueprint for success. The Zephyr may look like a shoebox, but it’s a very light car…just like the Mustang.

This isn’t a restoration project because Mitch has one goal with the wagon – go very fast. He dumped the original straight-six in favor of a 5.3 Chevy truck motor with a Turbo 400 transmission. It didn’t end there because he built the engine into a “670 horsepower at the tires” monster. There’s a turbo now and he’s going to upgrade it to E-85 fuel (800 horsepower) and a transbrake, so he can take it from a 10-second car and hit the 9-second barrier. Mitch’s goal is to “get kicked off the track and go for an ice cream because once you hit 10 seconds, you’re going to need a roll cage”.

The Zephyr wagon is basically in “as-found” condition and Mitch has no plans to change the look. He likes the weathered look, the dents, the beat-up interior, and the rust because they give the Zephyr history and tell its story at the same time. The wheels give it away to trained observers, but the average person will only see a battered old 80s wagon that’s barely roadworthy – until Mitch lights up the tires.

This Zephyr is not an easy car to drive. The rear end was upgraded but the front sway bar is gone, the front tires are skinny, and the rear differential is welded – Mitch said, “You can’t just drive it into a corner, you really have to think about so you have to adjust”.

Despite the tricky nature of the Zephyr, Mitch still runs the car in the real world because his goal is simple – a 9-second driver. The unusual handling is just a byproduct of massive horsepower coupled with a 1980s era station wagon. He’s added a Dodge airbag at the rear to handle the power on launch because good geometry is a key part of any run.

The Zephyr is the sleeper of the year because nobody expects a boxy-looking, early 80s wagon to crack the sound barrier, so it has stealth on its side but Mitch had a bigger plan in mind when he rescued the Merc. He explained it in a few words.

WILL A VINTAGE STATION WAGON MAKE YOU A ROCK STAR?