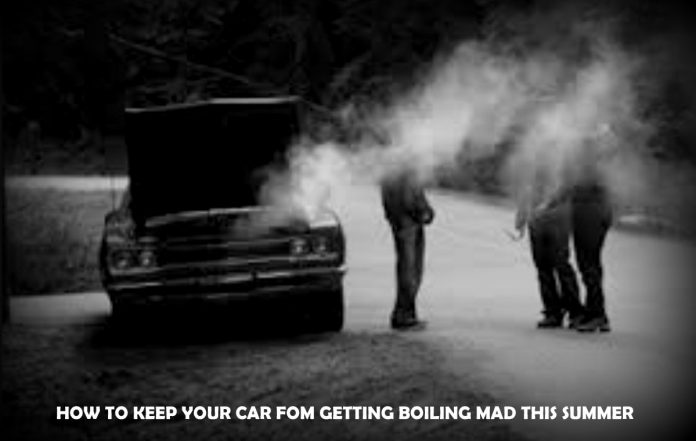 Those hot summer days are here–so the road beckons for car guys.

There are many reasons why your classic hates summer, but new gas is high on the list. The new blends eat rubber and degrade over winter, so your first run shouldn’t be in July with last year’s gas–vapor lock will have you on the side of the road relying on the kindness of strangers within an hour.

You can beat vapor lock with some new tech stuff. Start with an electric fan. Cole Quinnell is a marketing representative for Flex-a-Lite and he was emphatic about electric fans: “Compared to a belt-driven engine cooling fan, an electric fan offers quite a few advantages. It can provide full airflow regardless of engine rpm. That means that when you’re sitting and idling, or going at slow vehicle speeds, the electric fan can still provide maximum air velocity to keep your engine cool. That’s what makes them great for high horsepower vehicles, off road trail vehicles and pretty much anything that gets hot or overheats at idle, sitting in traffic or other slow-speed conditions”.

Shrouds are another huge piece of the puzzle–Cole was firm on that topic: “If the electric fan will be your primary cooling fan, you want to cover at least 75% of the radiator core surface with the fan shroud. Flex-A-Lite makes a variety of electric fans with injected-molded shrouds. These do a great job of pulling good airflow through as much of the radiator as possible, which provides better cooling than just pulling it through the typical basket style fan shroud. In some cases, the basket style is all that will fit, though”.

Cole was cautious about radiator replacement, so he offered this advice: “The key is in figuring out what your vehicle really needs. Most people jump to the conclusion that they need a new radiator. But properly diagnosing a problem will save them time and frustration. If a car is overheating at idle, then adding an electric fan or replacing the belt-driven fan with an electric will solve the problem. If the vehicle overheats all the time or mostly at speeds above 40 mph, then usually a radiator upgrade is needed. It’s all about the right solution for the problem”.

He added: “Make sure the cooling system is in good working order. Check the radiator cap – you’d be surprised how often a failing radiator cap will cause a car to boil over that otherwise has a good cooling system. We often see overheating problems with original cars when sitting in traffic, like at a car event. Adding an auxiliary electric fan to the front of the radiator solves this easily without distracting from the quality of the car”.

If a new radiator is the only answer, Cole offered this advice: “Flex-A-Lite makes bolt-in, direct-fit performance radiators and electric fans for quite a variety of vehicles. These don’t require any drilling or cutting, and they install the same way the original radiator did. We provide stand-alone temperature controllers that let the customer adjust the activation temp for the electric fans”.

I’ve looked under the hoods of thousands of classic cars over the last several years and I’m seeing a big trend toward upgraded cooling systems. If it isn’t crappy gas, it’s old cooling systems overwhelmed by summer heat and the lesson is simple.