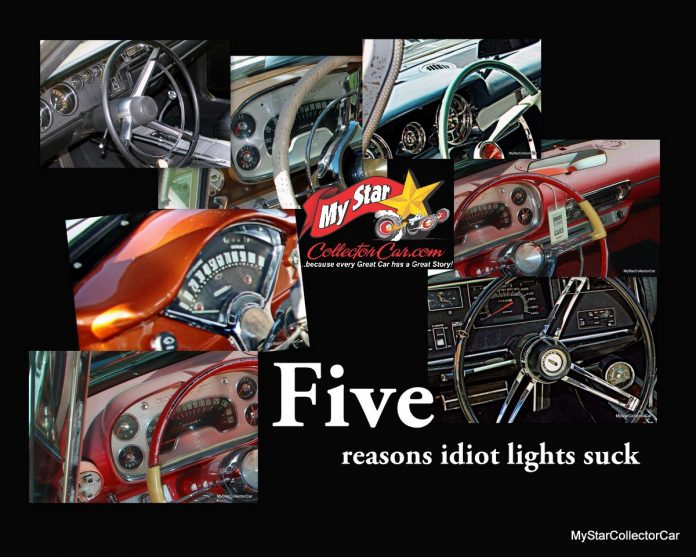 There are some very compelling reasons to monitor an engine with gauges instead of warning lights, also known as idiot lights in the car hobby.

For example, the engine oil warning light in a vintage car may light up just before the piston welds itself to the cylinder wall-or jail breaks through the metal wall altogether. In short, not enough warning to prevent catastrophic mechanical failure.

Therefore, MyStarCollectorCar’s first must-have gauge is an oil pressure gauge. This gauge will monitor oil pressure ups and downs while the car is on the road and under load. A smart driver will keep an eye on the oil gauge and adjust his driving habits accordingly when he is behind the wheel.

Lower oil pressure readings will give the driver an opportunity to acknowledge the problem with much-needed engine oil before it blows up-or to not be a bonehead and keep his foot out of the gas pedal long enough to limp the car home. An actual oil gauge will give the driver a wider range of choices than an idiot light in an older vehicle.

The second must-have gauge in a retro ride is a temperature gauge. A retro idiot light temperature system will alert the driver about an overheating issue during the “it’s red-hot-let’s-melt-iron-ore” phase of the issue. It may be too late in that Carole King song sense to save the engine from major mechanical problems created by extremely high temperatures by the time the temperature idiot light warns the driver.

An actual temperature gauge will give the driver enough information to make an informed decision about the engine heat. For example, climbing a large hill on a hot summer day may move the engine temperature gauge to the threshold of an overheating problem, but the driver would be able to make an informed decision about whether he wanted to risk going beyond that point for a sustained period of time. A temperature idiot light will warn the driver after he has already crashed through that heat barrier.

The third necessary gauge in a vintage vehicle is an alternator/generator gauge.

Savvy car guys will notice charging issues even without a gauge, mainly due to slower function of signal lights or heater fans, but a gauge will alert them to a discharge situation even faster so they can conserve battery power when there is a charging system malfunction. Or Door Number 2: fix the problem on the side of the road if they have the right parts and tools.

A fourth important gauge in a vintage ride is a functioning and accurate speedometer. Alterations to classic rides may include a major powertrain swap that may not be compatible with the factory speedo in the vehicle.

The net result may be a retro-styled vehicle that is a road rocket in vintage metal clothing that can run with the big dogs on modern roads and destroy a factory speedo along the way.

Aftermarket speedometers, whether GPS, electronic, or state-of-the-art mechanical, will deliver an accurate speed reading to the driver-and so will the traffic cop who gives him a radar ticket for that matter. Either way, an upgraded speedometer system will feed the right information to the driver.

Which brings MyStarCollectorCar to our fifth, final, and possibly most important gauge: the gas gauge. Most vintage vehicles’ gas gauges are a guesstimate in most cases, so they will tell a driver they have ½ a tank of gas when they really have a sparse array of gas fumes left in the tank.

Faulty gas gauges are perhaps the best exercise program in the car hobby because stranded motorists may be forced into long hikes to the nearest farmhouse or cell phone-friendly range to get help. Car guys who do not enjoy an unplanned hike because of a wonky fuel gauge may want to invest in an accurate one, unless they are good at math and can ballpark the vintage ride’s full tank range with a significant degree of accuracy- or simply love long hikes.