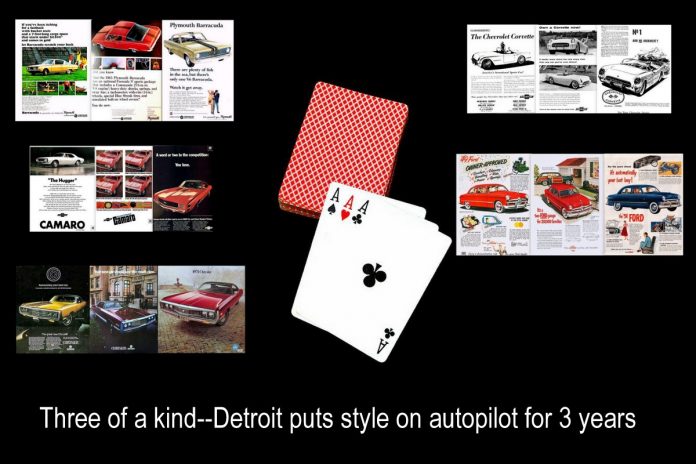 “Planned obsolescence” is alive and well in 2021. The term refers to a ruthless sales tactic that takes a perfectly good product and forces it into unnecessary change so customers will have to buy the new product.

Today’s main targets for planned obsolescence are any devices that rely heavily upon the cyberworld.

Planned obsolescence is a term that appears to have its roots in the early 1920s automotive world when General Motors introduced style changes to its cars on an annual basis and forced smaller car companies out of business because they could not afford to retool body designs every year.

Eventually GM even surged ahead of Ford in terms of sales because they offered something new every year and Henry Ford wanted to avoid change for as long as possible. Survival in the shark-infested waters of domestic automotive manufacturing started to depend heavily upon constant style changes over the ensuing decades, albeit with some exceptions that will be included in the following Five for Friday list.

Important background history: The Big Three put a halt to automotive production during World War Two and were able to stand pat during the early post-war era because there was a huge demand for cars after a four-year production timeout, so style change was not a big-ticket item at the time. The result was several years of new cars with an outdated style.

Ford followed this post-war game plan until 1949 when they introduced their new models, affectionally known as “Shoeboxes” because of their bold and unique style.

The new look Fords were a big hit with the public and even staved off planned obsolescence disease for three model years because of their popularity. The style was essentially the same for the Shoebox Fords over the three years, albeit with some subtle differences that are part of the discussion among the Shoebox Ford’s many fans.

The second addition to the MyStarCollectorCar list is the first-generation Corvette built from 1953 until ’55.

The early Corvettes were a far cry from the future monster horsepower Vettes, but these cars were the first ones and hold a special place in the legendary sports car’s legacy. The cars also had essentially the same style for the first three production years because planned obsolescence was put on hold for the pioneer Vettes.

The third example of planned obsolescence on hold is the first-generation Plymouth Barracudas.

MyStarCollectorCar readers may recall a recent article in which we showcased the subtle differences between 1964-66 Barracudas, particularly the nearly identical 1964 and 1965 models. However, radical style changes were not in the cards for these early Barracudas at Mother Mopar, so planned obsolescence for Barracuda models went on an extended vacation until 1967.

The fourth member of MyStarCollectorCar’s “Don’t go changing” list is another famous pony car, the 1967-69 Chevy Camaro models. The first-generation Camaro is now an automotive legend, although the 1969 Camaro is a runaway leader in the popularity contest.

Outsiders will not be able to easily distinguish the differences between the three Camaro production years, but the differences are obvious to the first-gen Camaros’ legion of dedicated fans. MyStarCollectorCar gave a tutorial about the differences in an article about the General’s iconic pony car. The clean look of the car made it easy for GM to stand pat style-wise in the late 1960s when it came to the Camaro.

The fifth and final member of MyStarCollectorCar’s planned obsolescence-free zone is the 1969-71 Chrysler New Yorker. The rounded style of the 1969 Chryslers was a new idea, along with a sweeping C-pillar design on the two-door hardtop models that was a subtle version of the famous fastback roof design from that automotive era.

The big cars from any of the Big Three builders were not subjected to a relentless annual parade of major annual style changes like lesser automotive models in their family over the years, so it will come as no surprise that Chrysler’s New Yorker models stuck to the same basic body style plan for three years, starting in 1969 until 1971.