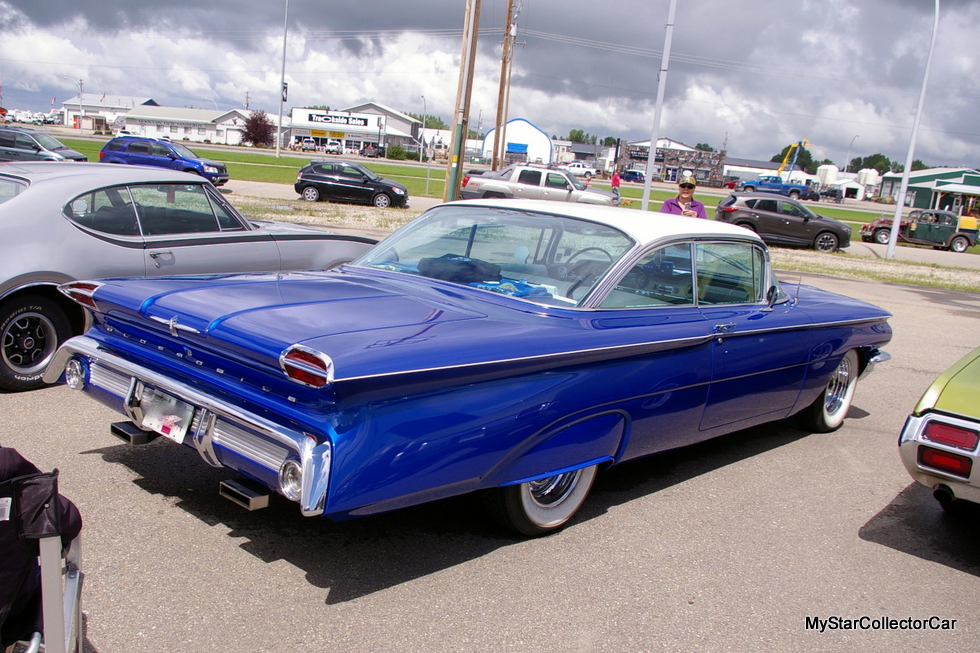 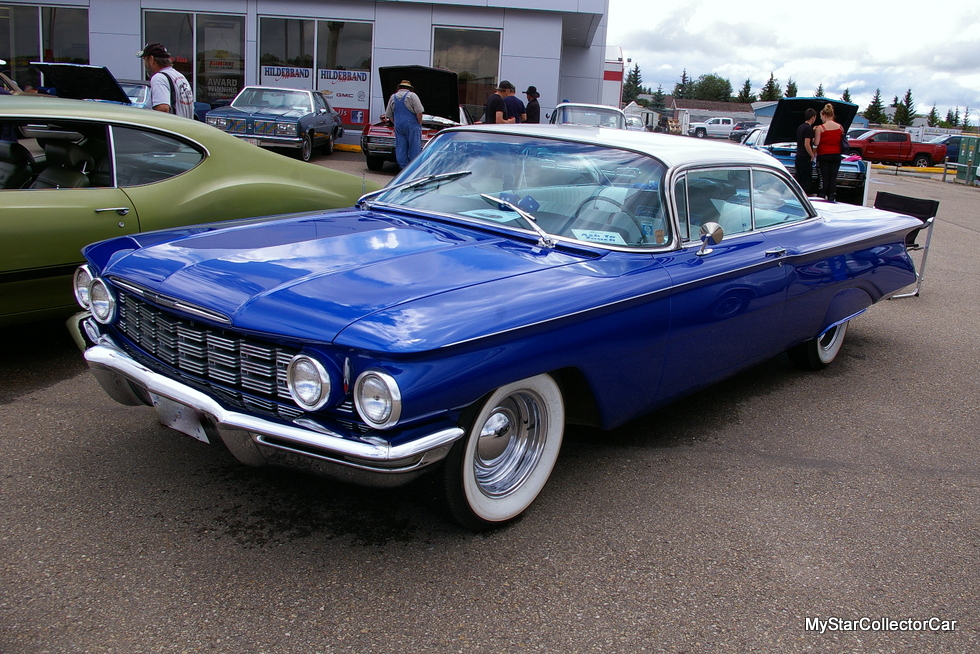 Oldsmobile was always one of GM’s premium brands.

It was not quite a Cadillac but it was more than a Chevy.

The 98 was the flagship of the Oldsmobile fleet and these models were large and in charge during their heyday. 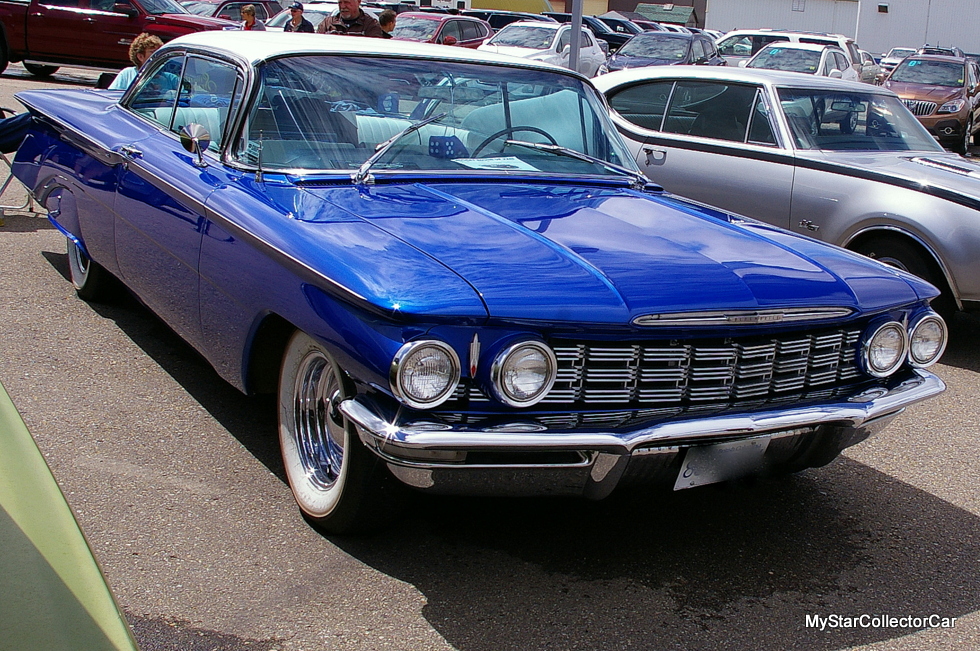 1960 was part of the 98’s heyday and we discovered one of these iconic cars at a summer car show for the Oldsmobile brand. The 1960 Oldsmobile 98 was a transitional car that bridged the gap between the Fifties and Sixties.

The 1960 Olds 98 was a more streamlined ride than its predecessor from 1959. The stance was lower and the taillights were more integrated into the rear deck of the ‘60 Olds 98. 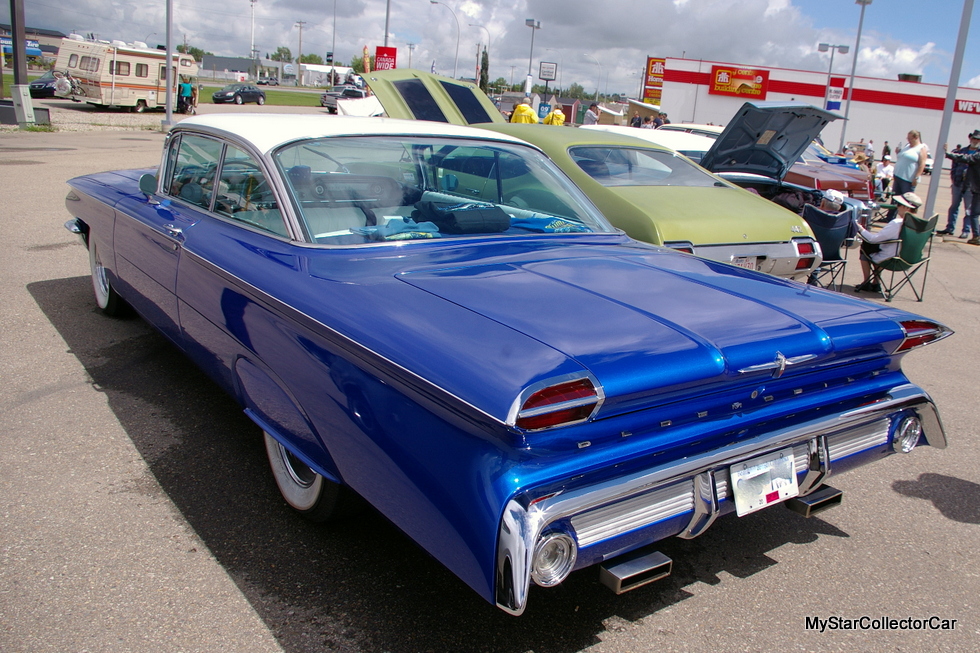 The overall result was a car that screamed style back in the first year of a wild decade of change. Clarence Mineault’s first car was a 1960 Olds 98. He was a young 15-year-old kid who was very proud of his big sedan back in the Sixties.

Clarence owned the car long enough to develop a real fondness for the big cars and decided he wanted to own another 1960 Olds 98 a few years ago. He found one in Pennsylvania, had it shipped to Edmonton, Alberta Canada and then trailered it back to his northern British Columbia home. 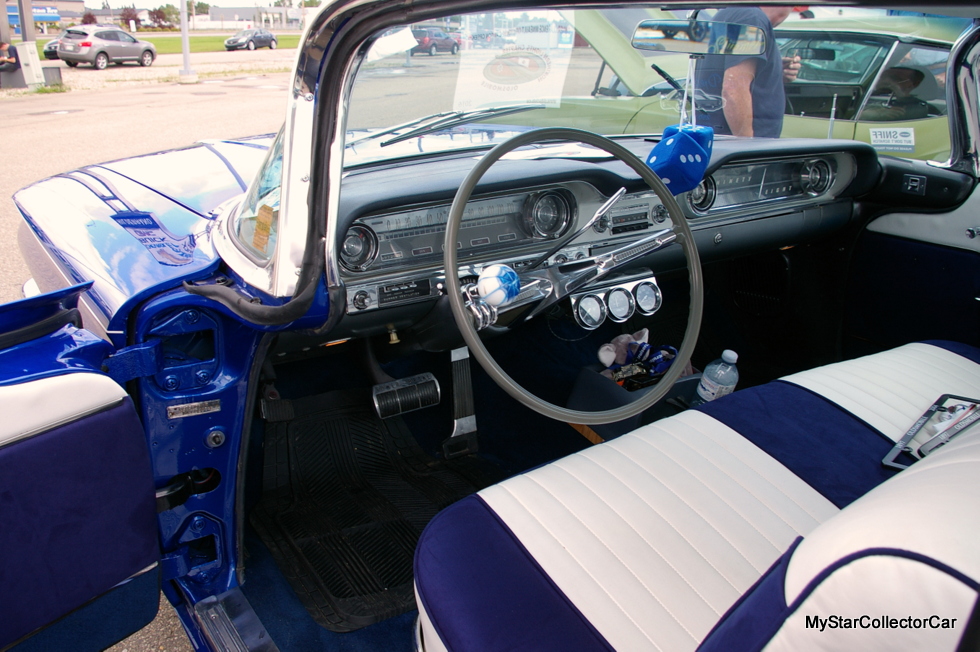 The car had been modified to accept 20-inch tires and Clarence wanted to restore the car back to its factory look. The Olds needed front fenders because the previous owner altered the fenders to accept 20 inch tires for his custom look.

Few people get to look over the hood and fenders from their first car after that many decades. Even if the rest of the car is different, the view is still the same for the lucky owners. 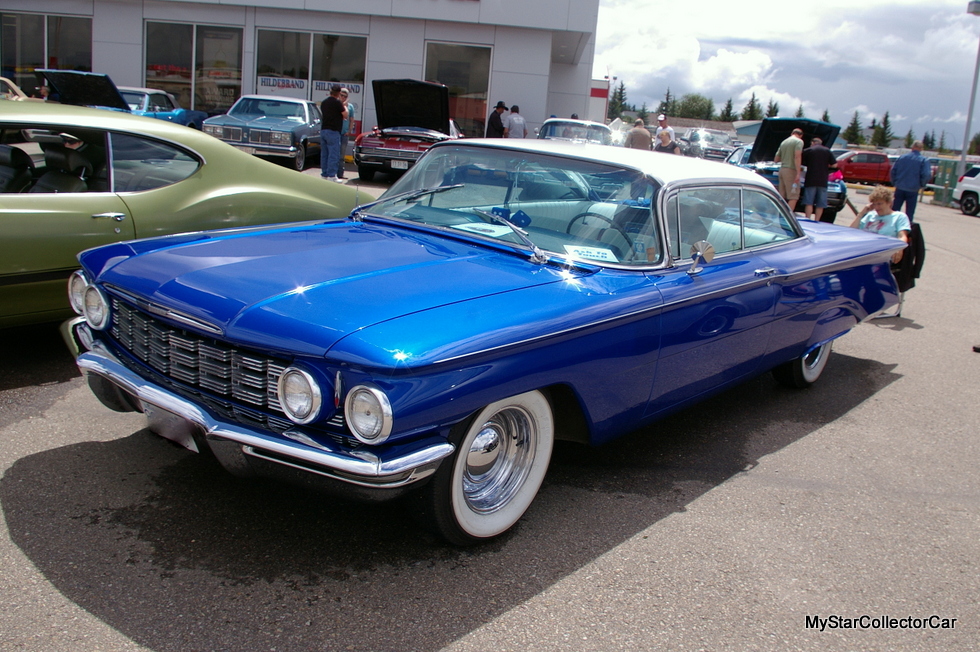 A smart car guy know one thing: get your bride onside before you invest in an expensive restoration and Clarence’s wife Kathy is definitely onside with the 98. She enjoys the people side of the equation and their car definitely attracts plenty of people at a show. 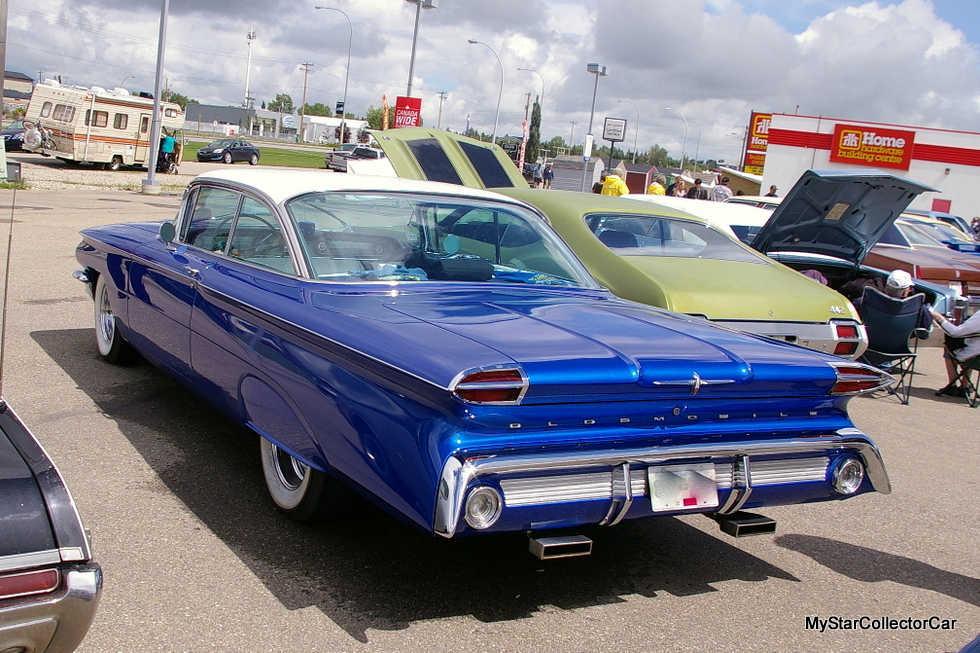 In fact, it also attracted a Mayor’s Favorite Car award at the Oldsmobile show where we discovered this stylish 1960 Olds. 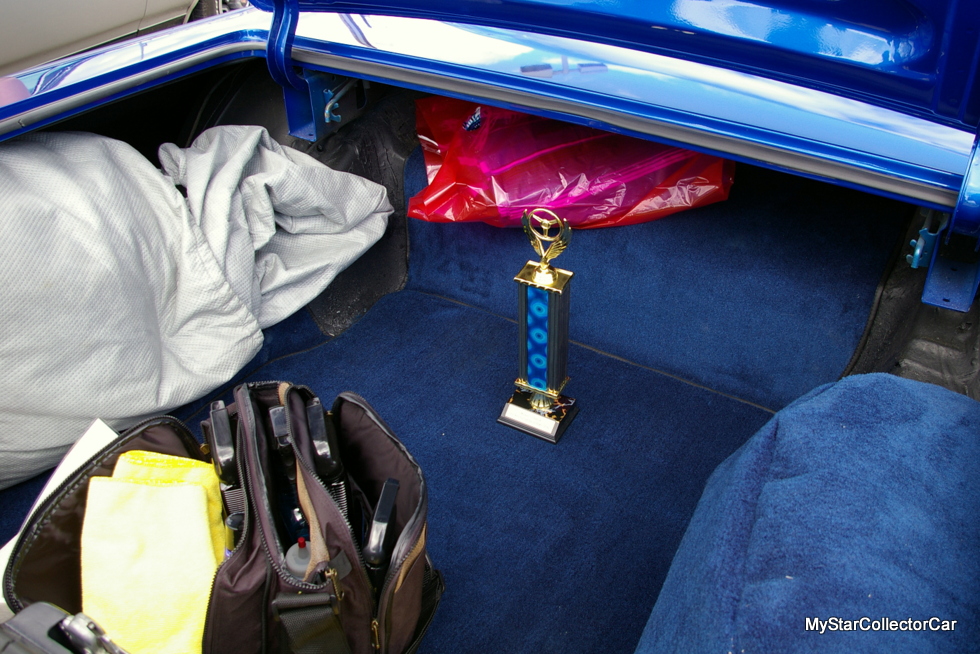 Kathy told MSCC their car gets plenty of thumbs-ups from curious onlookers who are not quite sure about its identity. Kathy said Impala is a popular, but wrong guess about their Olds.

Their Olds has all of the whistles and buzzers like power steering, power brakes and power windows. The 98 still has its original 394 Rocket V-8 which is still hooked up to its original 3-speed automatic transmission.

The 98 rides down the road great and is very stable at high speed, according to Clarence.

The restoration was completed in early 2016 and now the Mineaults can enjoy their Olds on the road or as a car show star attraction. 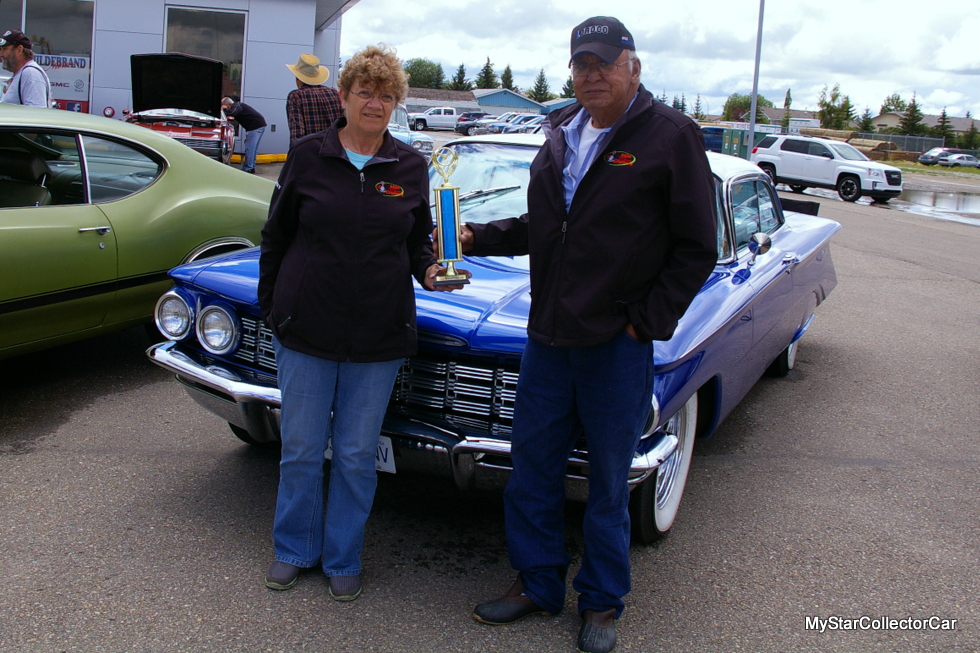 ‘Either way works great for them.’