They really stood out at the show for 2 reasons-they were bright red and they were 1978 Ford trucks.

Nobody arbitrarily restores late 70s Ford trucks so this row of workhorses stole the show because people were naturally curious about the “why” part of the equation.

They would literally walk by some seriously classic iron to look at the trucks and ask “why?”

Wayne Watt has been a Ford guy since the days when Patti Page was a force on the radio and we were still in the middle of a Korean conflict. His younger brother owned a red 56 Ford truck and since then the Watts have only used red Ford trucks for work in their construction business. In his own words, “All my life I’ve never had anything but red Fords for real trucks.“In fact Wayne reported, “Nobody knows when we get new trucks because they’re always red”. 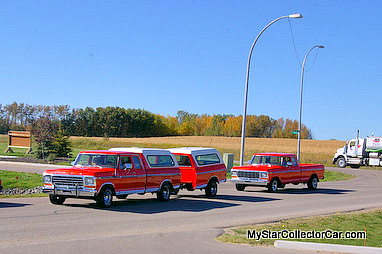 Back in 1977, Wayne and his brother ordered new 1978 Ford Ranger XLT trucks for the business and the first question they were asked is “would you consider Coral Orange as a color?” They hesitated because this looked like a break with Watt tradition but, in actual fact, Coral Orange is a bright shade of red. 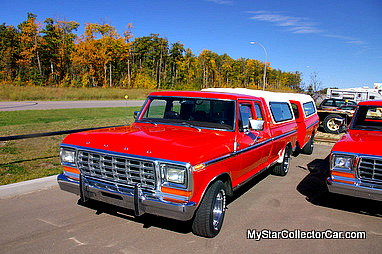 Eventually the Watts ended up with thirteen 1978 Ford pickups but the first two went to Wayne and his older brother so the question arose “how do we know who gets what?” The answer as old as time itself-Wayne’s older brother got the first one because he was the eldest sibling. Wayne remembered telling him “you’re the oldest, you get the first one off the assembly line”. That one had the big 460 cubic inch motor and Wayne ended up with the 400.

Wayne wasted no time-the first casualties were the factory seats. He took out the back seat entirely and replaced the front seats with Toyota bucket seats. That made a huge difference because Wayne reports “I can drive this truck for 12 hours straight and never get tired”. 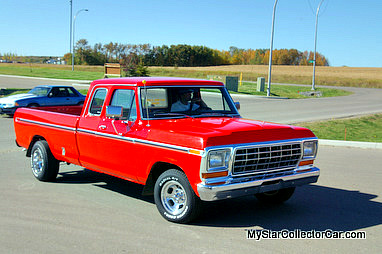 According to protocol, in 1980 the trucks were due to be traded up for brand new Fords, but Wayne had a big problem with the new Fords, “I didn’t like the 1980s, you’d close the door and it didn’t sound right”. That sound convinced him to refurbish the 78s and use them for many more years. In fact they’ve never really retired because Wayne still drives a 1978 Ford truck to work daily and often uses them to do estimates. 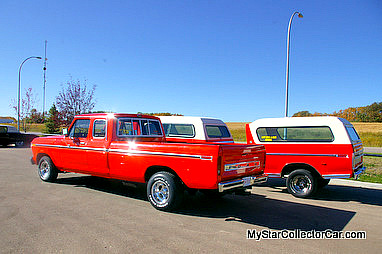 The Watts clearly like to keep things in the family so when Wayne’s brother passed away that first truck off the assembly line didn’t have far to go for a new owner-Wayne’s son Jim bought the truck from his aunt. They were travelling in tandem at a late summer show and Jim’s truck was hauling a matching trailer. 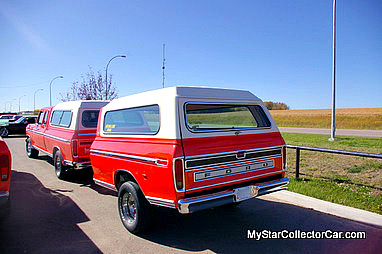 The trucks have made the Watt family local celebrities because that fleet of 1978 Ford XLT trucks and 3 matching trailers is very likely the biggest existing one in the world. They make a huge impression every time they send this “Red Army” to a show as evidenced by that scene back in 2007. 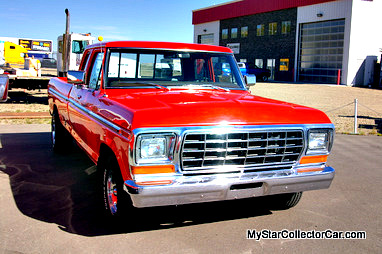 Wayne recently organized a reunion of 8 trucks at the Ford dealership where the Watt family purchased them new back in the late 1970s. The owner came out and wanted “to know what the hell was going on”. Then he insisted on grabbing a wide angle for a photo shoot with the trucks. 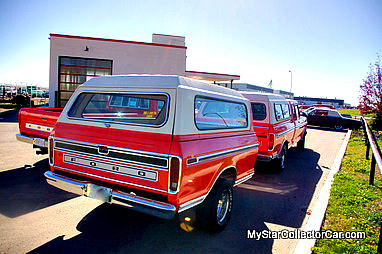 The Watt family truly enjoys life behind the wheel of the vintage Ford trucks. They’ve actually run them head to head at the local track and Wayne admitted “my 400 kept up with the 460 for most of the track but it pulled away at the end”. Wayne also likes to haul a bucket T on a trailer behind the truck when he’s on a car show vacation. 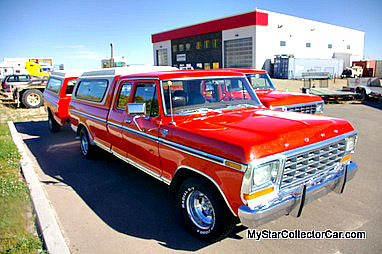 There’s no doubt that the Watt family is a Ford family but this bright red fleet clearly makes them the first family of ’78 Ford trucks.

WHERE’S THE NEXT GENERATION FOR THE CAR HOBBY? THEY HAVE TO...