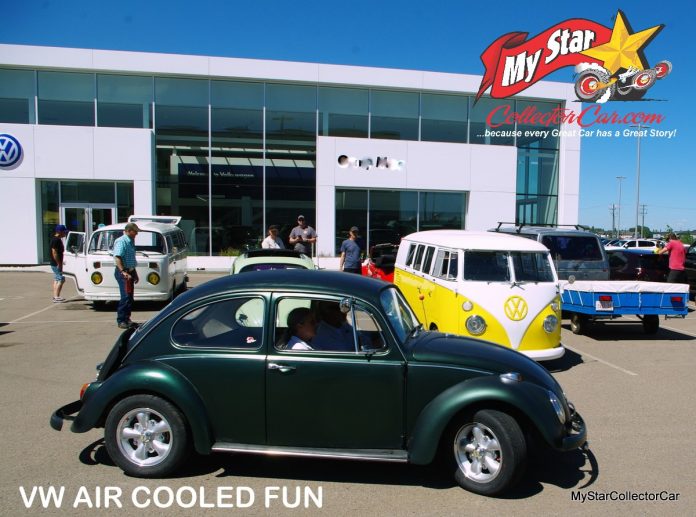 An air-cooled VW fan club is always an enthusiastic collection of car guys and girls who have a deep connection with the lovable first-gen Bug and its interesting siblings from a bygone era in Volkswagen history.

This year’s show took place in Red Deer, Alberta Canada, a community of about 100,000 people that is situated about half-way between Alberta’s largest (million-plus people apiece) cities of Edmonton and Calgary. Therefore, it makes sense for Alberta’s Beetle people to meet in Red Deer.

I have touched on the topic of air-cooled VWs numerous times over the past 12 years here at MyStarCollectorCar because I had hands-on experience as a teenaged owner of a VW bus, as well as a high school incident when I rolled my brother’s Bug. My incident was a careless moment when over-driving a Beetle led to one of the slowest rollovers in recorded history.

The only thing injured in the rollover was my pride and the roof of the Beetle after I lost control of the car on a dirt road, hit the ditch, and learned the hard way about why Ralph Nader was so upset with independent rear suspensions after my steering over-correction put the Bug at an extremely steep angle out of the ditch. Result? A very predictable rollover for boneheads.

We pushed the Bug back on its wheels and drove back to town. It ran like a top, but the car’s potential as a high school driving machine was over for good.

A little over a year later, I became the proud owner of a 1961 VW microbus with few redeeming features and even less power than the rollover Bug. However, my early experiences with the famous air-cooled VW vehicles cemented my interest in them forever, and now a vintage VW meet will capture my interest in a big way.

The first vehicle I noticed at the Red Deer show was a 1962 VW Type II bus, not because it was roughly the same age as my own long-lost bus, but because it had a generous collection of bug splats on its windshield. My old Volkswagen van would only have bug splats if they were shot out of a cannon directly at my windshield-but this VW bus earned every untimely insect death at high speed.

The bus had obviously undergone a few upgrades to reach warp speed on a highway and MyStarCollectorCar will be happy to reveal the 1962 VW Type II’s secrets at a future date. We spotted another VW bus with this funny apology sticker in a rear window, but this ’62 version had a serious power upgrade, so its owner had no need to apologize to other drivers on highways.

Read how and why in a future MyStarCollectorCar article.

The other star at the VW show was a 1974 VW Thing (aka VW 181), an unconventional addition to the air-cooled Volkswagen family that was banned from North American highways after the aforementioned Ralph Nader took dead aim at it.

I wrote about the Thing for an upcoming MSCC article and explained why they are not common at car shows in general (mostly because they got on Nader’s bad side), so I was pleasantly surprised to find a female owner of this 1974 VW Thing at the Red Deer show.

The ’74 Thing’s full story will be the subject of a future MyStarCollectorCar article, so stay tuned for that one.