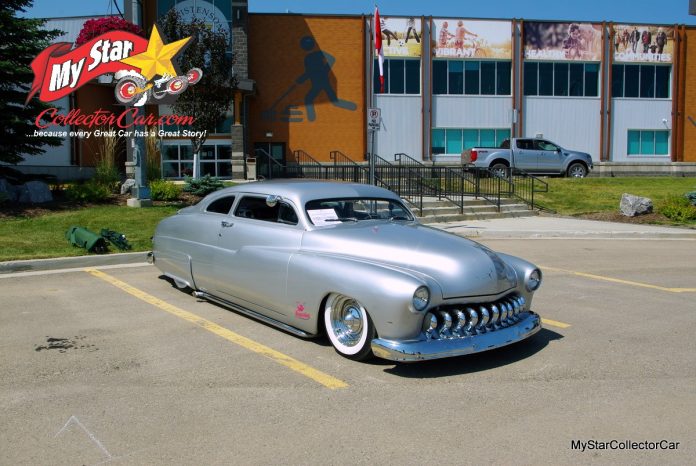 First, a brief lesson in geography and automotive history because a 1950 Monarch custom lead sled is an unusual vehicle that looks a lot like a Mercury lead sled from the same era.

The reason is pretty simple because the Monarch was essentially a Mercury built for the Canadian market until 1961.

Randy Cofield is the proud owner of a ’50 Monarch custom lead sled, a vehicle he bought in 2005 and then spent the next several years building his dream ride. Randy’s dad was a car guy and owned many custom vehicles over the years, including a lead sled that inspired Randy to want one when he was a kid.

The Monarch has undergone some major alterations over the years, including Randy’s vision of the perfect engine, a vintage 392 Hemi monster that now lurks under the hood. Randy felt the legendary 1950s-era Hemi was one of the “great motors” in his words and richly deserved to be a part of his Monarch build.

The car rides on a 1980 Olds chassis, a platform choice that gives the Monarch a comfortable feel on the road. Randy mated the vintage Hemi to a GM automatic overdrive transmission (to drop the RPMs) because he intended to drive the car-a lot.

In fact, Randy has already logged thousands of miles behind the wheel of his Monarch, including a 1400 mile road trip to Las Vegas’ Lead Sled Spectacular, an event in which his unusual Canuck lead sled was a huge hit.

The brute force power of the 392 Hemi gives Randy plenty of horses under the car’s hood, a performance feature he corrals with a four-wheel disc brake system upgrade. The bug splats on the front of the car indicate Randy is not afraid to drive fast and clearly does not brake for flying insects.

There were a couple of added cosmetic features to the ’50 Monarch, including its name (Moonshine) and cartoon decals of a pink elephant. It is no secret that custom projects allow owners to free wheel in any direction chosen by them, so Randy was able to answer our questions about the car’s Moonshine name and cartoon pink elephant.

Randy chose the name because of the car’s silver color and thought about the old song ‘By the Light of the Silvery Moon’ when he thought about his Monarch’s paint job. The pink elephant cartoon pays tribute to the famous 426 Elephant Hemi, even though Randy was quick to acknowledge his engine was a 392 Hemi- still a very large engine in its own right.

The vintage Monarch custom has functional lake pipes that give the big Hemi plenty of breathing space in the exhaust department. Randy also upgraded the vacuum wiper system because it is still a vacuum- driven unit, but now has its own electric pump to produce the needed wind power for the wipers.

MyStarCollectorCar spotted Randy’s ’50 Monarch several years ago, but were unable to connect with him, so we were happy to track him down at a July 2021 show.