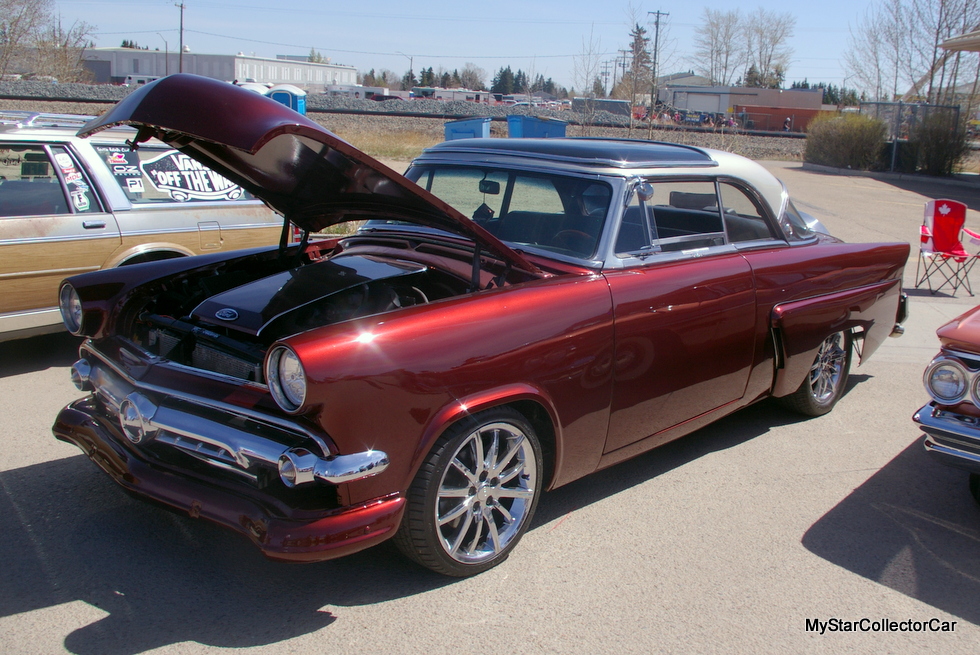 Clancy Adams was at an auction when he spotted an unfinished custom project and decided he want to be the guy who completed the work on a 1954 Ford Sunliner.

Clancy holds two tickets (mechanic and millwright) and was ready to tackle the remaining work on the Sunliner project.

Clancy placed the high bid on the ’54 Ford and cleared the first hurdle on the car project: ownership. 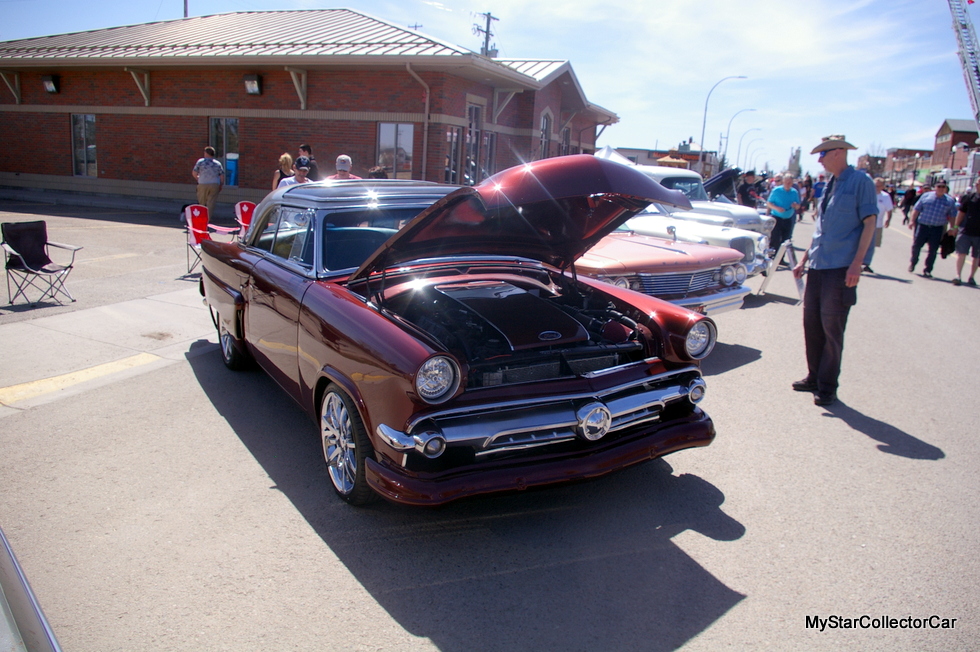 Clancy purchased an “empty shell” in his words-a car with no powertrain or glass in its long list of missing items. He also mentioned that 3200 dollars cured the missing glass problem on the ’54 Ford and he installed the pieces after a long search. 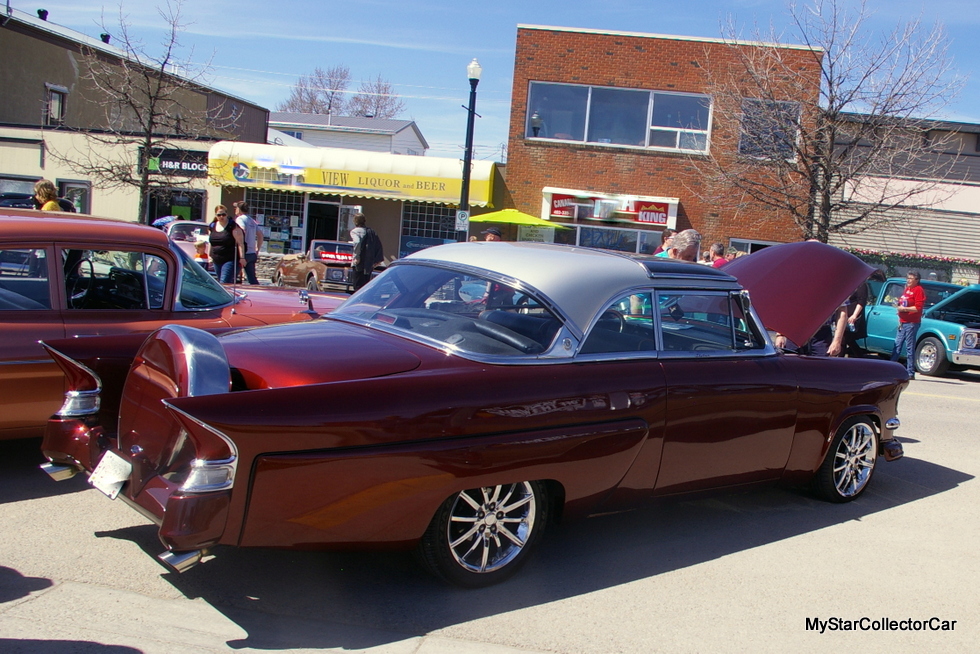 However, the custom side of the project had already been started by the previous owner and now the ’54 Ford sported 1956 Packard tail fins, along with custom rear quarter panels. The finish line for the project may have been too far in the distance for the former owner so the completion task was given to Clancy at the auction. 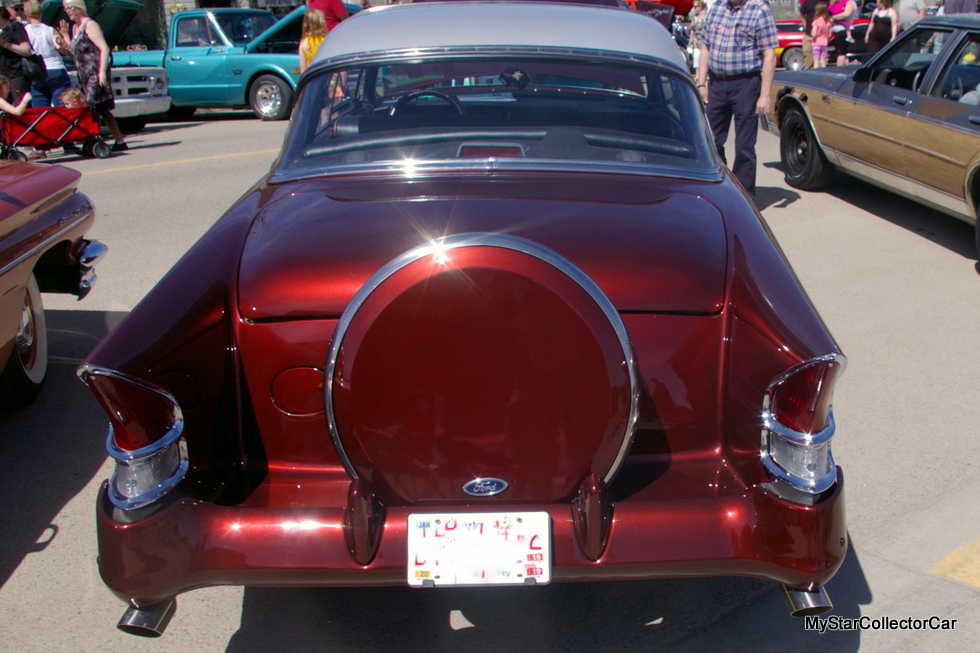 Clancy is an old school builder who likes to buy donor vehicles that offer solutions to his custom project requirements. He wanted to build a modern vehicle camouflaged by a very retro custom car so the ’54 Ford Sunliner was the perfect candidate for a resto mod.

Clancy purchased a 2009 Ford Crown Victoria police car that was suddenly retired by a collision with a fleeing motorist on a busy four-lane highway when the driver tried to force the big Ford off the road. The premature retirement of the police car meant Clancy was able to purchase a modern donor car that was not miled-out before it was sold to the public. 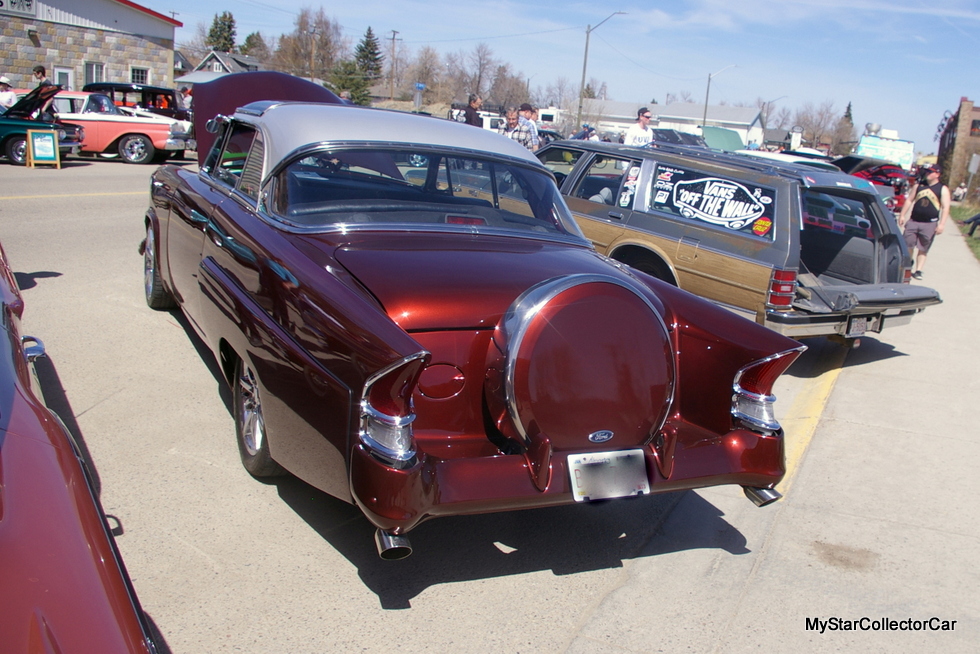 The police car had a 4.6 liter small block Ford engine hooked up to a beefed-up 4 speed automatic transmission that effortlessly pushed the big 21st century Ford police car down the road and would have no trouble moving the 1954 Ford Sunliner. 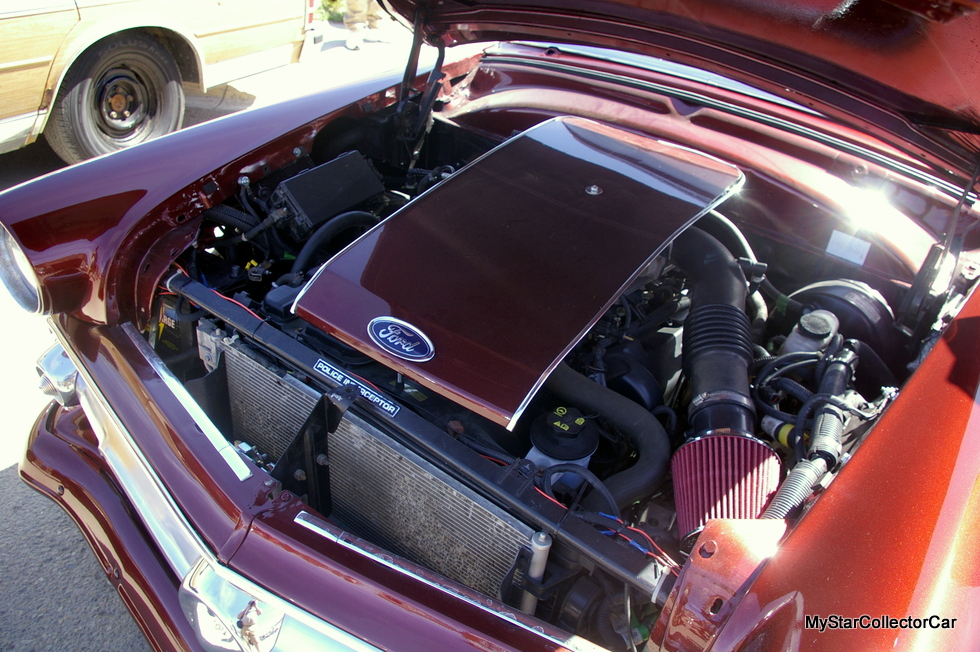 Clancy wanted to use as many of the new features from the donor car as possible on the ’54 Sunliner, including the entire front clip from the police car because it was undamaged by the side collision.

He was able to bob the frame on the ’54 Ford and weld in the front end of the donor car so the old car would handle and drive like a new car. Clancy also added the drive-by-wire throttle feature, as well as ABS and traction control to his custom Ford Sunliner. The 65-year-old car now sports the police car’s dashboard to handle the electronic requirements of the new powertrain. 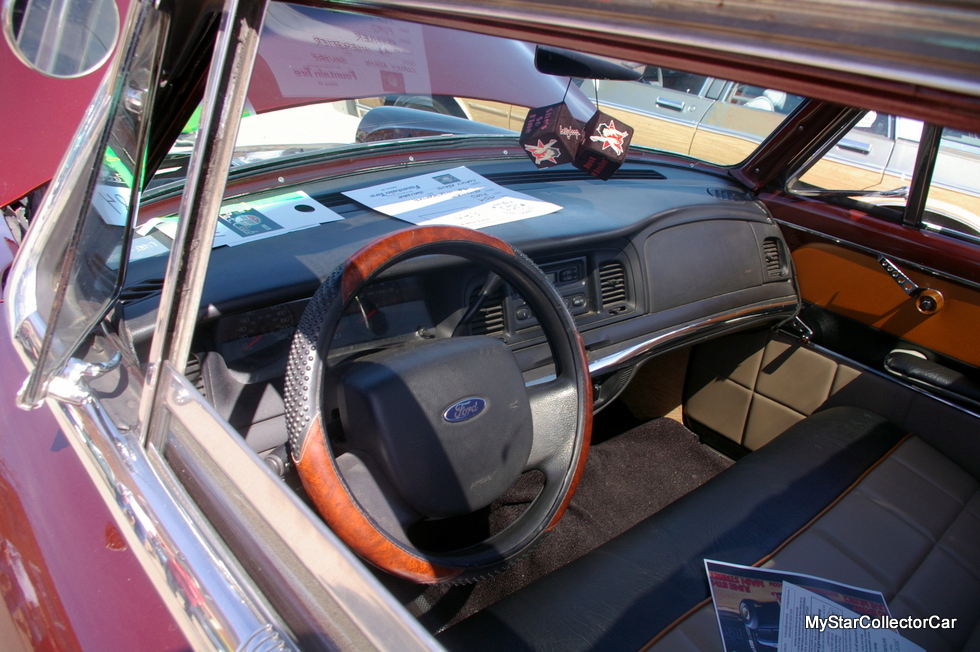 The car now has a centralized electronic system from the donor car that Clancy calls a “brain box” because it handles the complicated new brake system for the ’54 Sunliner, including its ABS feature. 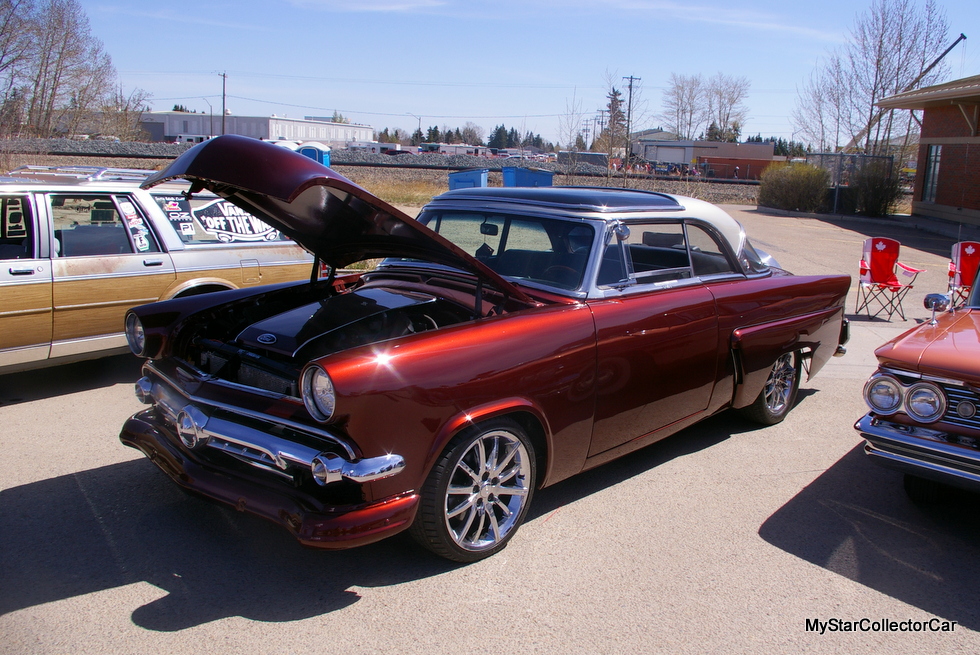 The entire conversion process only took 5 months, according to Clancy. Then he concentrated on the cosmetic details, including new upholstery on the ’54 Sunliner’s seats. He also installed an air conditioning system so he would be comfortable under the glass roof in the car. 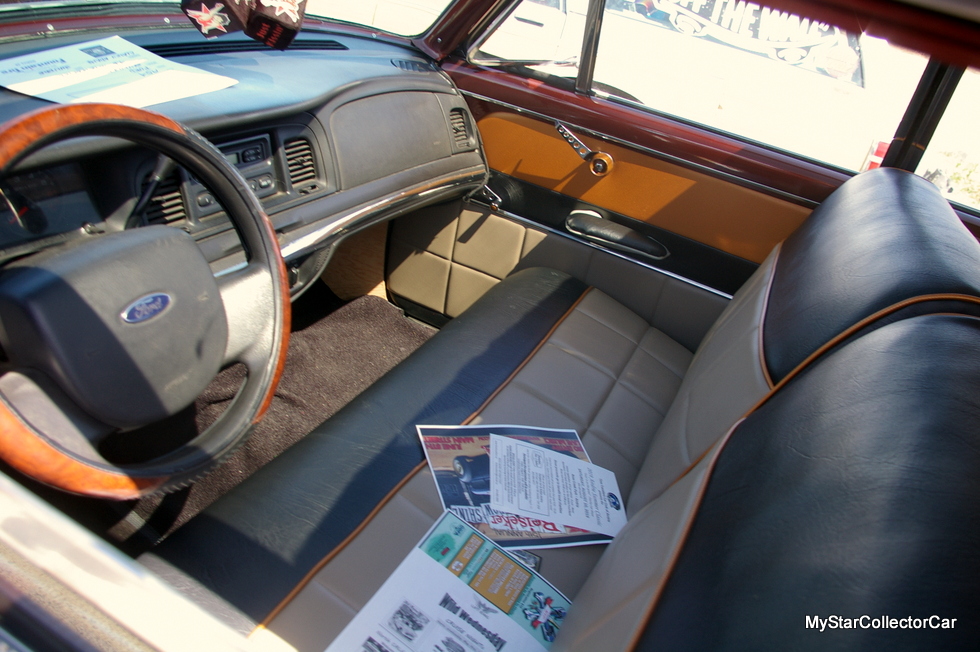 The car’s paint and body work added another 6 months to the build process after Clancy finished the mechanical side of the project. The custom cover over the engine was provided by the hail-damaged hood on Clancy’s 2015 Ford truck. 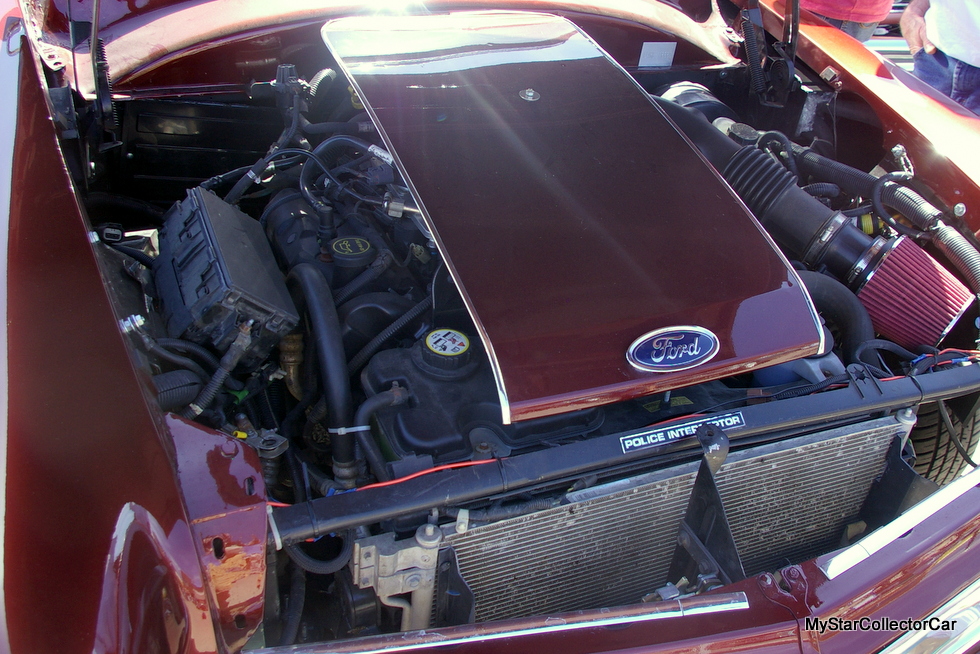 The finished product is a stunning resto mod that gets plenty of attention every time Clancy takes the Sunliner on the road. He does not own a trailer because he prefers to drive the car and loves its blend of old school custom features and new age technology. 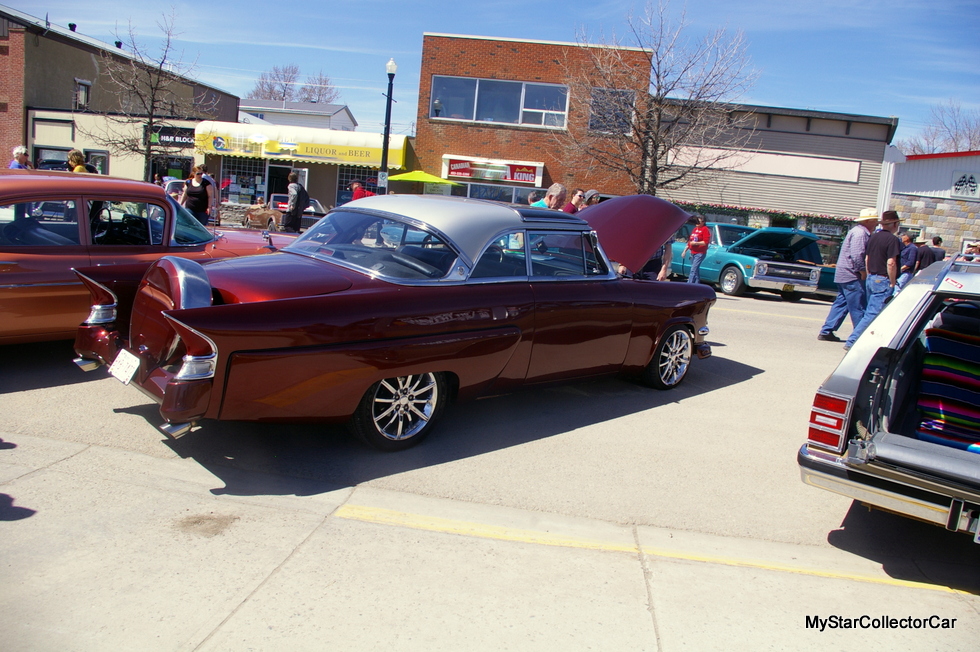