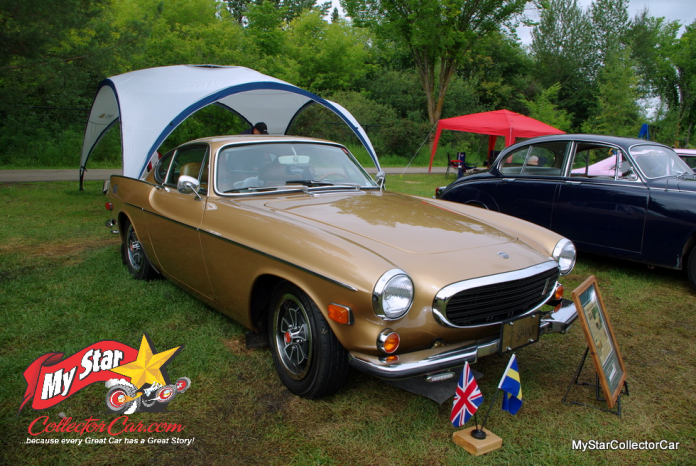 The secret to a long-term relationship is being happy from the day it starts.

That secret applies to human and automotive relationships because longevity is not based on a specific formula—it’s a gut feeling.

Ferd is a self-confessed Detroit iron guy and he wanted a Corvette back in the early 70s but he admitted everything he looked at “was junk or too expensive” so he expanded his search for a car. He spotted a newspaper ad for a ’71 Volvo P1800E and he bought it on the spot. Ferd was always a fan of these cars and he admitted the famous white P1800 in the British TV show ‘The Saint’ was a big factor.

The original owners were expecting their first child and the Volvo didn’t fit the extra addition to the family so Ferd took delivery of his nearly-new (5000-mile) P1800 in May, 1972. Ferd drove away in a car he still has 48 years later—not many marriages last that long.

He’d saved up enough money to buy the Volvo and for six years he “drove it pretty hard” but he said it “had never seen snow and still smelled new” so he entered into a long-term relationship with the Volvo. A few years later, he moved north so the car was “driven occasionally but mostly stored” in that time.

Ferd moved south again in 1988 and that’s when he decided to look at the mechanical side of the P1800. He had it bored out and raised the horsepower from its factory 130. He said he had “everything done” to the car even though it was still a lightly-used car in the late 1980s.

Ferd painted the car in 1992 and it’s still immaculate because this ’71 P1800E looks like it just rolled off the showroom floor.  The car sees less road time and more storage but that could change because Ferd shed a political position that required a lot of time to attend weekend political events like parades and community events. Now he has weekends open so the car show circuit is a very real possibility for Fern and his Volvo. Ferd loves it when younger spectators “ask what it is” and older guys are always talking to him about his P1800.

Ferd doesn’t run the car over long distances—he rolls up about 500 miles a year so the odometer show an honest 50,000 miles. He does admit to putting it through the paces when he does drive it because he says “it runs better when you run it hard” so he sticks to that playbook every time he takes it out for a run.

He does stick to 65 miles per hour on the highway because it’s “really comfortable at that speed” but he has run it much higher in his youth. He said at higher speeds the car “gets pretty light in the front end” so the threshold is much lower in 2020.

Ferd never thought he’d still have the same car he bought back in 1972 but he’s looking forward to the 50th anniversary of the relationship.