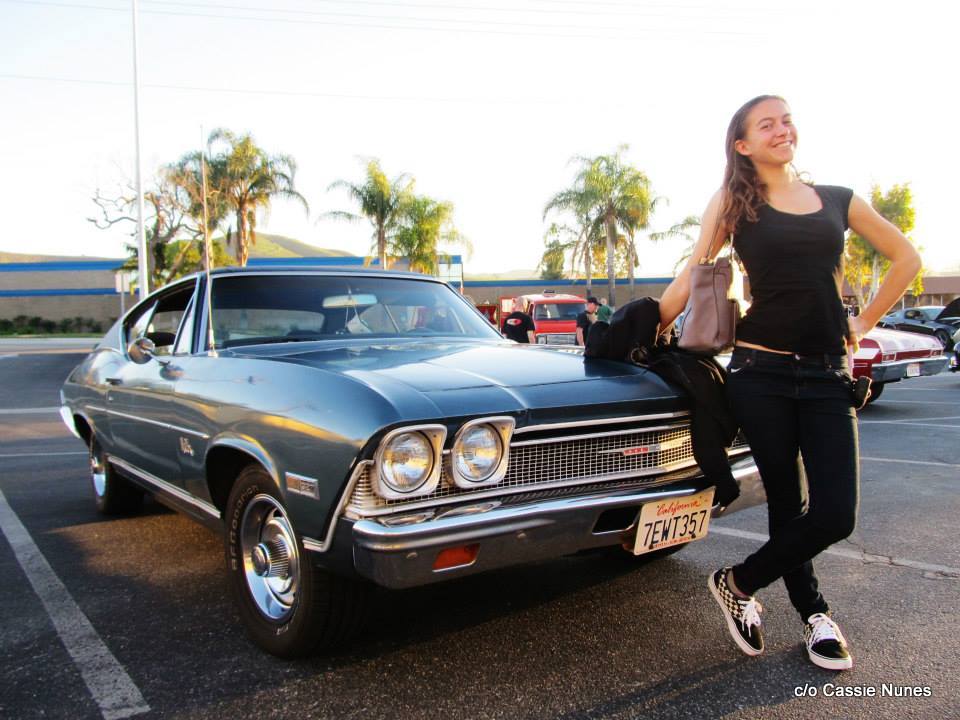 Old iron reaches every generation so MSCC looks for young gun stories to celebrate the future of the hobby.

Young gun stories aren’t confined to young guys because there are many examples of younger women who love the classic iron as much as anyone else in the hobby.

Cassie Nunes is great example of how much commitment a younger female owner can bring to the old car hobby. 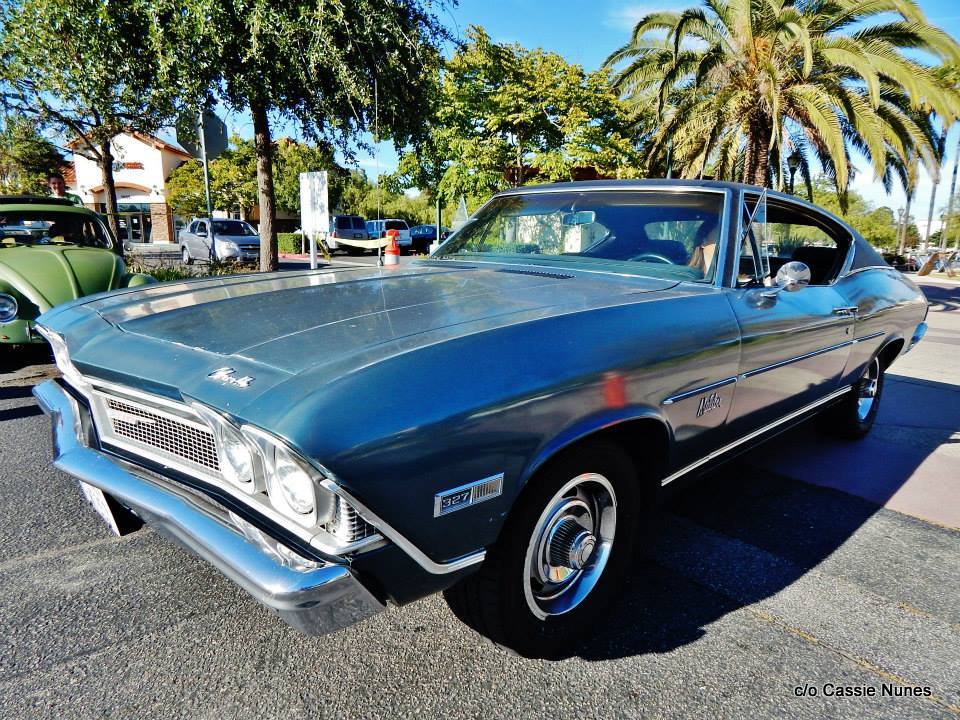 She owns a ’68 Chevelle Malibu and it’s actually her 2nd one because of an unfortunate incident but that didn’t stop her from acquiring another one as she explained: “I had another Chevelle before it. I had an an accident and it had been totaled. Once I found out it couldn’t be repaired and back on the road safely, I instantly started looking for another. Same year and everything. Luckily my dad’s friend had this one up for sale and I got it at a great deal”. 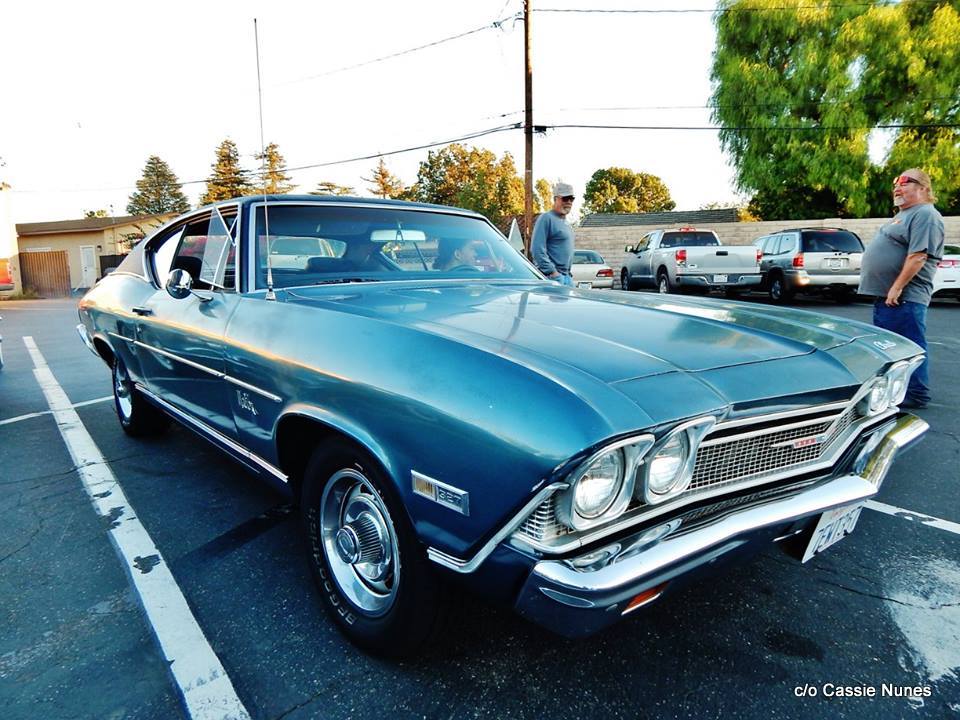 She’s owned her ’68 Chevelle since December 2014 and she described it as, “Decent condition, the vinyl top needed repair work and some cosmetic work, but it ran and drove”. 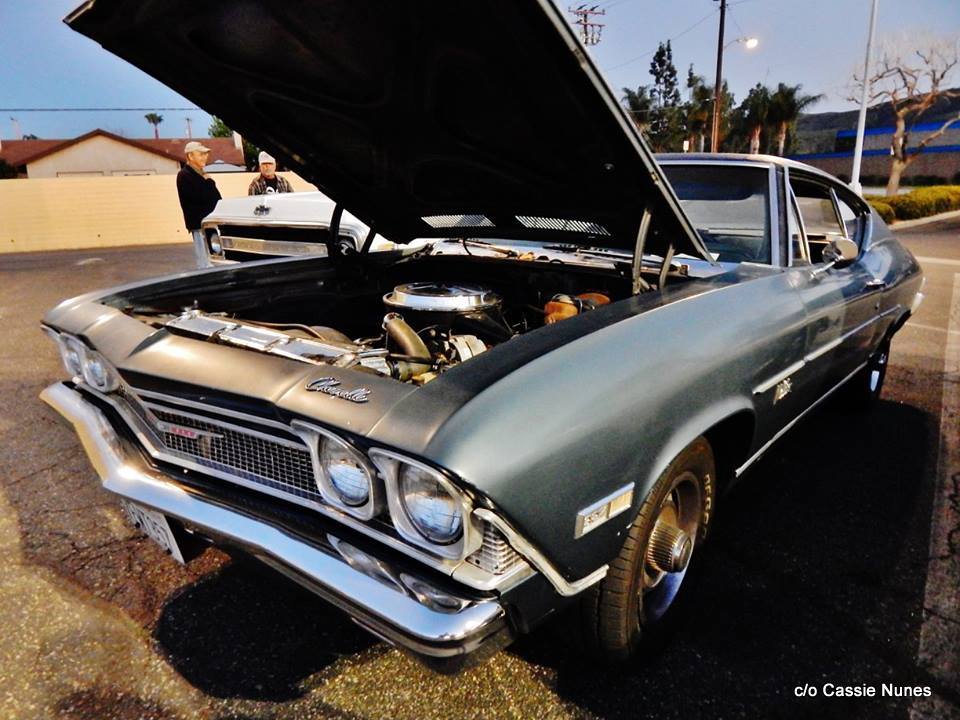 Cassie had a long list of parts she had to replace on her Malibu: “ We’ve replaced and done a lot of work to it like a new vinyl top; new headliner; new starter; new flex plate; new distributor; new master cylinder; new alternator bracket; new spark plugs; new radiator; new style radio/speakers (the ones that were in the car weren’t factory and one speaker was blown out); new weatherstripping (roof and trunk); new windshield wipers; new control arms/bushings; new bearings and new hoses”.

There were other things that she had to address as she explained: “A new transmission (we replaced the original 3 on the tree manual with an automatic) Later we sold the original trans for parts money. Por 15 (not sure of spelling) was laid on top of the roof before the vinyl top and along the inside of the trunk trim to prevent rust. New metal placed between the bottom of the back window and trunk (the metal had completely rusted out and was breaking apart under slight pressure)”. 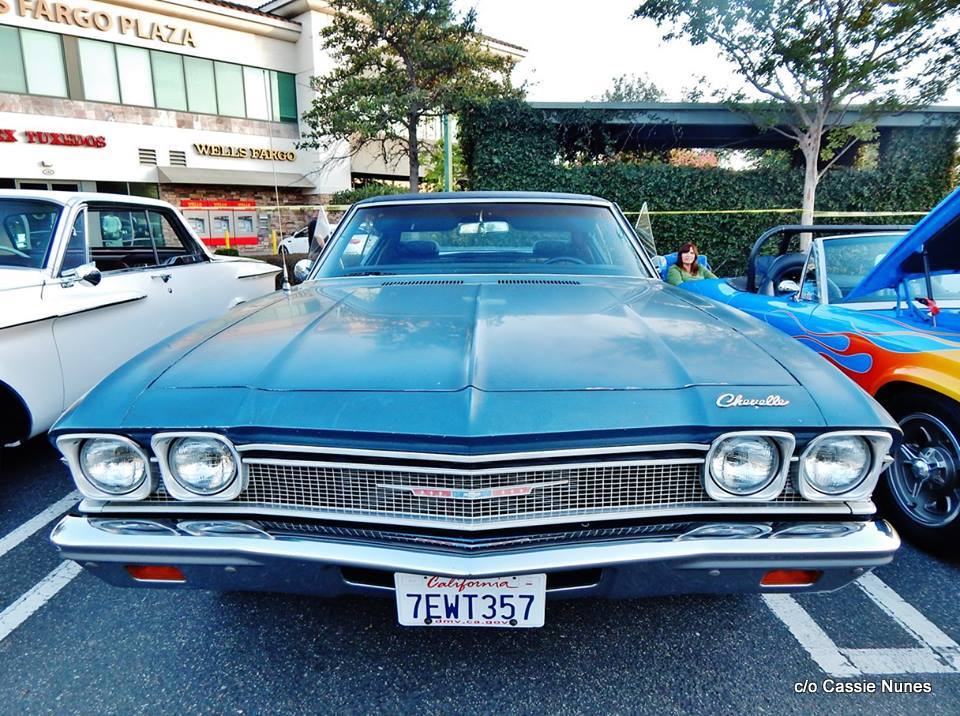 The ends justified the means because Cassie loves spending time with her car: “It is literally the greatest time of my life when I’m cruising! I love the rumble of the engine under my feet and the heat inside the car. I love the beat of classic rock from behind me and the look of my hood in front of me. The greatest memories are in my car, it’s smooth and powerful. I feel confident and happy. The car is my beast and I love her. It’s unlike anything else in the world”. 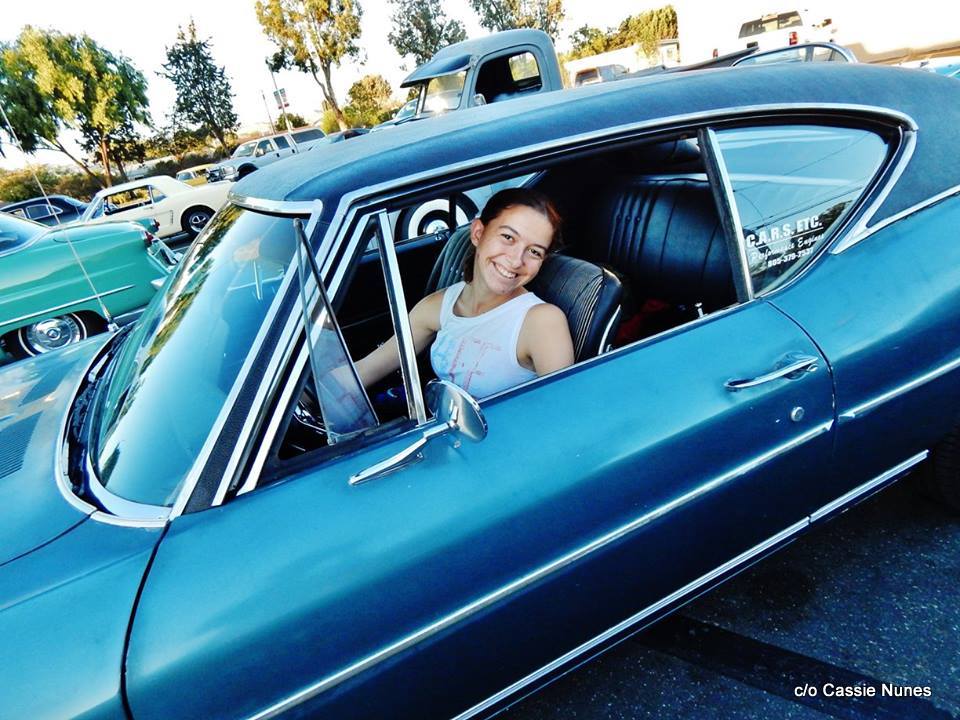 Cassie definitely doesn’t own a trailer queen because her ’68 Malibu sees a lot of time on the road: “I recently drove to Anaheim for a work thing and I drove for 2.5 hours (L.A traffic) there in the morning and 2.5 hours back at night. A more common drive I’ve done has been to Santa Clarita for Six Flags Magic Mountain or for the Route 66 Car Shows. All the times I’ve driven the car has been reliable and gotten me through”. 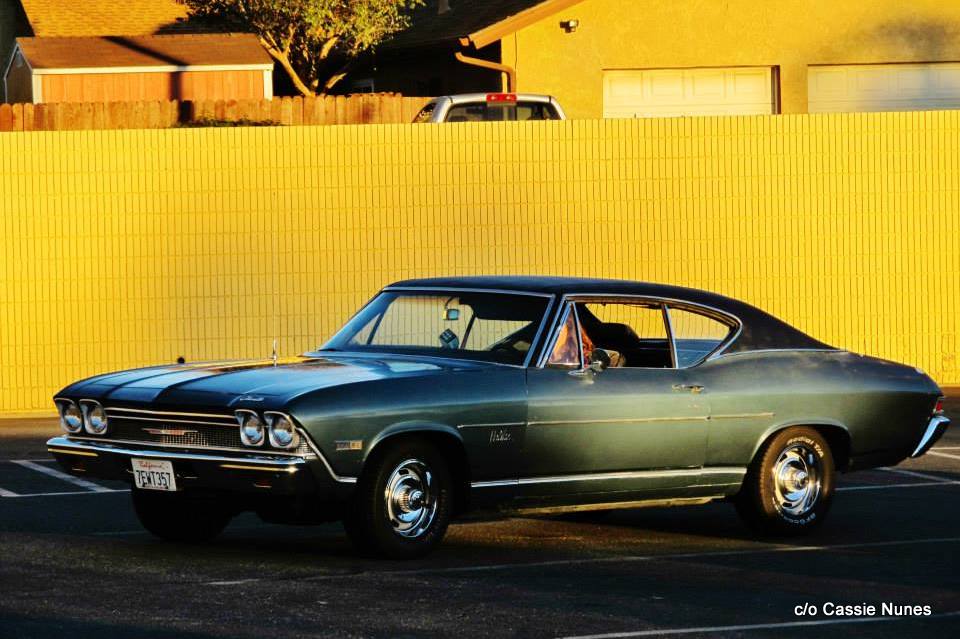 The best part about old iron is the human equation and Cassie basks in the spotlight—she explained the reaction she gets when asked if she gets any attention in her classic Chevelle: “Tons! People like to wave and honk at me on the road or at stop lights”. 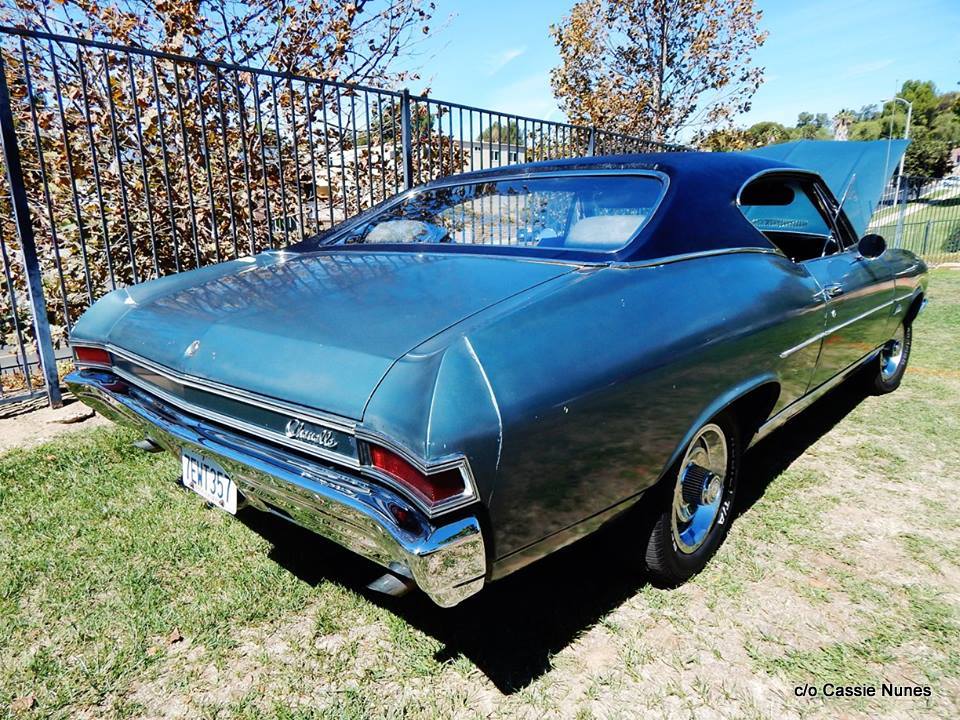 Cassie was born to be part of the hobby because she (a younger female) is already recruiting the generation after hers:

“The best memories however are when I’m at car shows and the little kids ask to sit in my car. I of course allow them to sit in the car and honk the horn. Their faces light up so much when they sit in the seat and I get to be reminded of how excited I was when I was younger.”