Car Craft magazine clearly had a sense of humor in 1972 when they put an M60A1 tank through a test drive.

They treated the big war pony like a real street machine and included all relevant information (seats four, good torque, reasonable acceleration and handling with its 112,550 lb curb weight) for interested customers.

Car Craft included an owner survey that indicated the following; “the average number of trouble areas was 158. As owners of earlier models reported 48 trouble areas, we expect that, considering usage in modern warfare, the reliability of the M60A1 will not be good”. 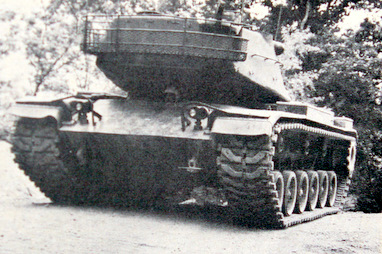 The owners of these tanks would likely have wanted a better reliability record when it comes to wars, but tank dealerships have always been a little scarce. In 1972, you had a choice between a Commie tank- or a non-Commie tank (some restrictions apply based upon political affiliations).

The tank had a few appealing options like its ability to run in 13 and half feet of water and a large bore cannon to clear out traffic jam problems. 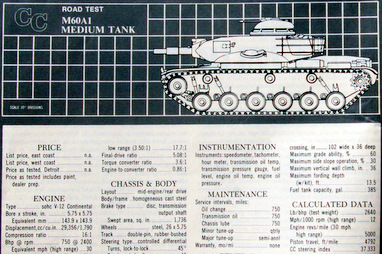 Car Craft summed up their test drive thusly:* “To wrap it all up, the M60A1 seems to be a very refined, rewarding tank. It handles pleasantly with neutral steering and very good directional stability. Though down on power with only 13.2 horsepower per ton, the positive- acting transmission tends to minimize this deficiency. A definite plus for the manufacturer is the long list of options available to the buyer. Ranging from the .50 caliber turret-mounted machine gun with 2 –meter range-finder, and the 7.62 mm machine gun coaxially mounted with the 105 mm gun, to the winterization kit for operations down to –65 degrees F. and the fording kit which allows operation in 13.5 feet of water, the M60 buyer can personalize the tank to his own specific needs. Perhaps our only real criticism is with the color selection available to the buyer. In the modern age of competitive free enterprise, it does seem strange that the M60A1 is available only in Olive Drab, but then again, this is a small distraction from the overall value of the vehicle” (* Car Craft Magazine, January 1972). 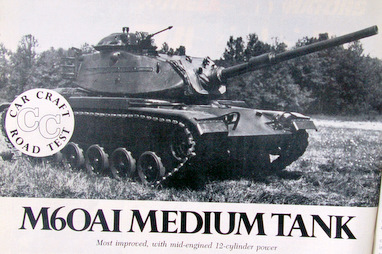 We will continue to take a look back at the car culture from magazine days of yore. However, we just did not expect to see a real tank during our 70s car magazine look in the rear view mirror.

And that was an era when there were a lot of cars as big as tanks on the road.

More stories about the other giant car kind of tanks at–https://www.mystarcollectorcar.com/

WHAT DID 50S COOL COST? AN OLD JC WHITNEY CATALOG WILL...