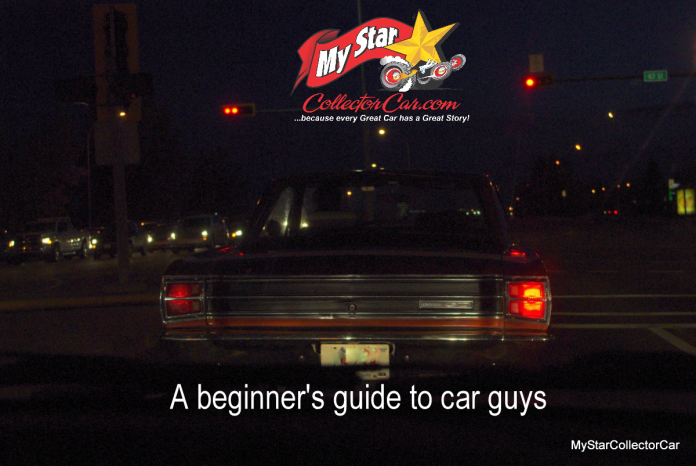 The car hobby is a mystery to outsiders because it defies logic, but MyStarCollectorCar is here to unravel the mystery of the car guy.

‘Car guy’ is a relative term because women who embrace the old car hobby are as heavily committed to the hobby as men. Their numbers may be fewer, but women carry the same enthusiasm for old iron as males so the term ‘car guy’ as it applies here is definitely not gender specific – it’s just easier to put everyone under the same tent.

Car guys may look like they live in the past because they prefer to drive cars that don’t look anything like your family’s Hyundai SUV – but under the surface you’ll find some surprises.  Some car guys prefer their cars to be 100% factory-correct – right down to the air in their tires – but most car guys embrace anything that makes their cars run better and faster.

They live in the past and the future. This may sound like a Star Trek episode where the crew takes the Enterprise on a reverse lap around the sun and ends up back in 1968 but it’s simpler than that. Car guys embrace new technology so they’ll add stuff like fuel injection and air conditioning — they’ll willingly  wrap new tech in the form of an old classic.

Car guys are tech geeks by nature – they’re like computer geeks who actually get their hands dirty. Anything that improves their old car is an asset to car guys even if it involves mastering a laptop. Some car guys buck the trend to hi-tech solutions (things like multi-port fuel delivery), but they won’t turn down the advantages of a bolt-on, highly efficient new-tech carburetor, fuel pump or cooling system.

Companies like Flex-a-Lite have turned new tech cooling systems for old cars into an art form because they know an old flathead V-8 runs a lot better when it’s not boiling over or vapor-locking on a hot day in heavy traffic. That’s why and how car guys live in the past and the future.

Car guys are optimists. You can’t take on massive projects unless you are an optimist because a car project isn’t just a big jigsaw puzzle – it’s a jigsaw puzzle that wants to punch you in the face over and over again. That’s why projects take years, not weeks.

Car guys are generally well-grounded people. There’s a standard joke that car guys don’t have any bad habits because they can’t afford them and (to an extent) that’s true. You don’t have the time or the money for other vices when your garage has a 4-wheeled, money-sucking vacuum taking up every inch of your floor space. The difference is a car guy’s old car is an appreciating asset – booze and drugs are just hazy memories.

There you have it folks – a basic beginners guide to car guys.