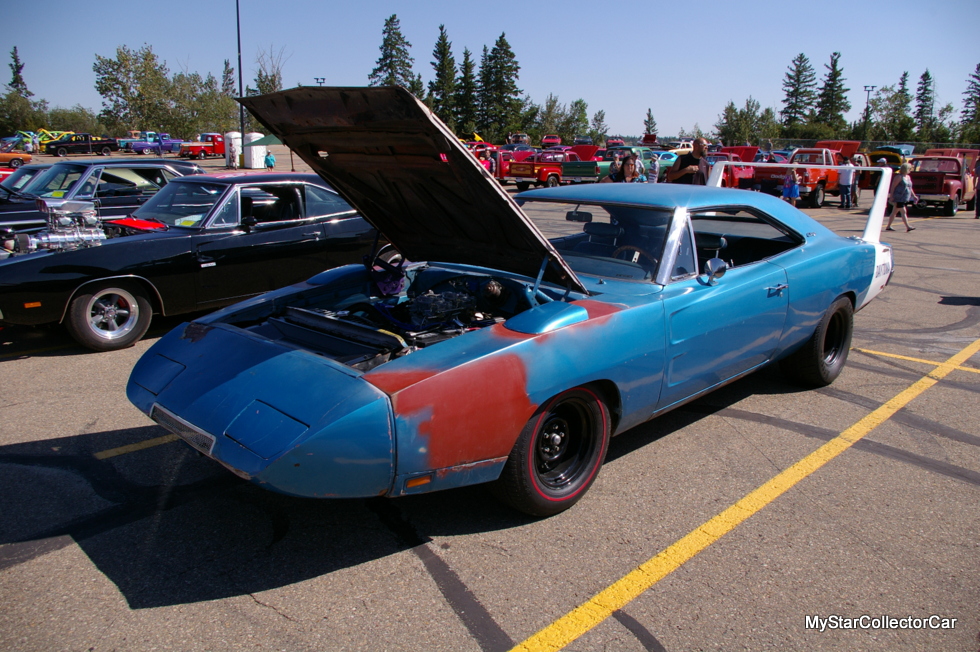 Most guys who own a classic muscle car tend to head in a full restoration direction.

There are many reasons for this but the bottom line is this—a correct restoration adds monetary value.

That’s the road most traveled but there are owners who take the other, less restored road with their projects — this ’69 Daytona is one of the best examples of that concept you’ll see in the hobby. 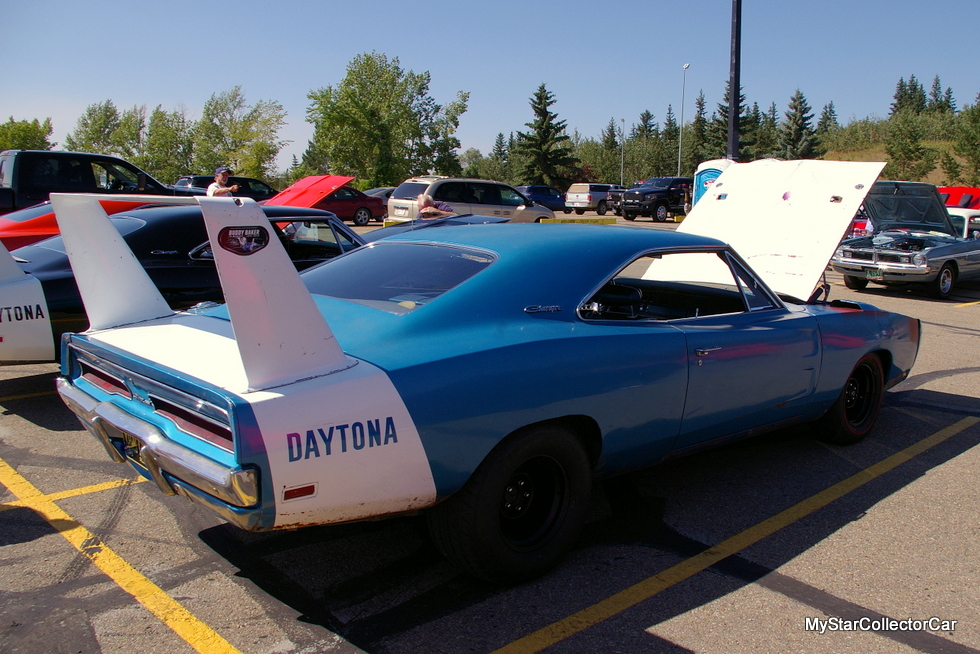 Bobby Urwin is the proud owner of this unrestored 1969 Daytona and his only goal from Day One of ownership was simple—have fun with the car. He bought the car in 1978 despite the protests of his banker who insisted that Bobby’s dad was a co-signer on the loan. 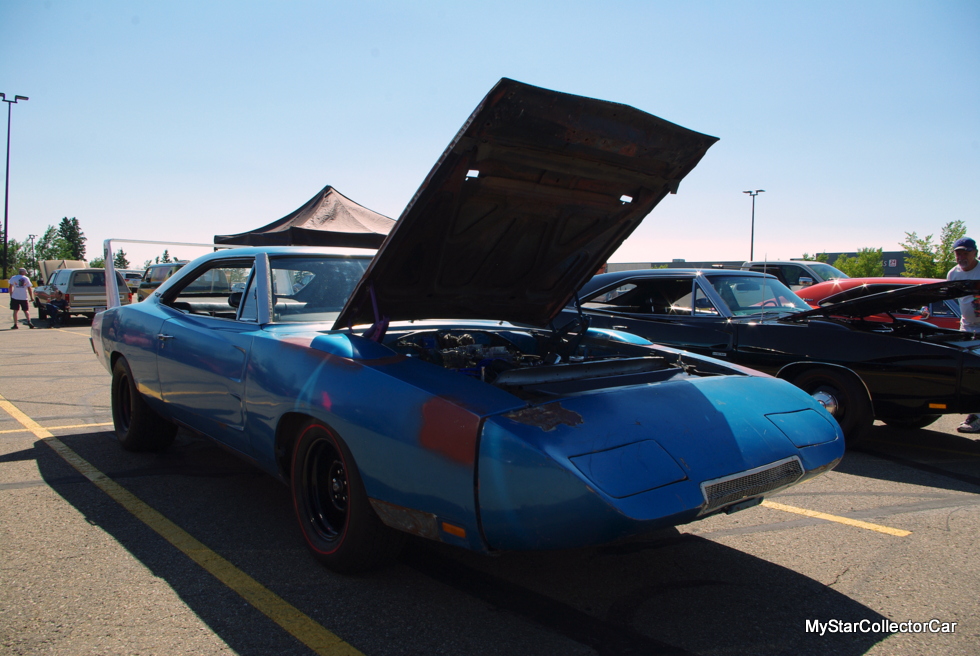 The Daytona was a daily driver for the first year so it definitely had a real winter experience. In fact, Bobby put some snow tires on the car so he could drive his buddies to the ski hills. They liked the size of the car because it could handle four adults with lots of room. 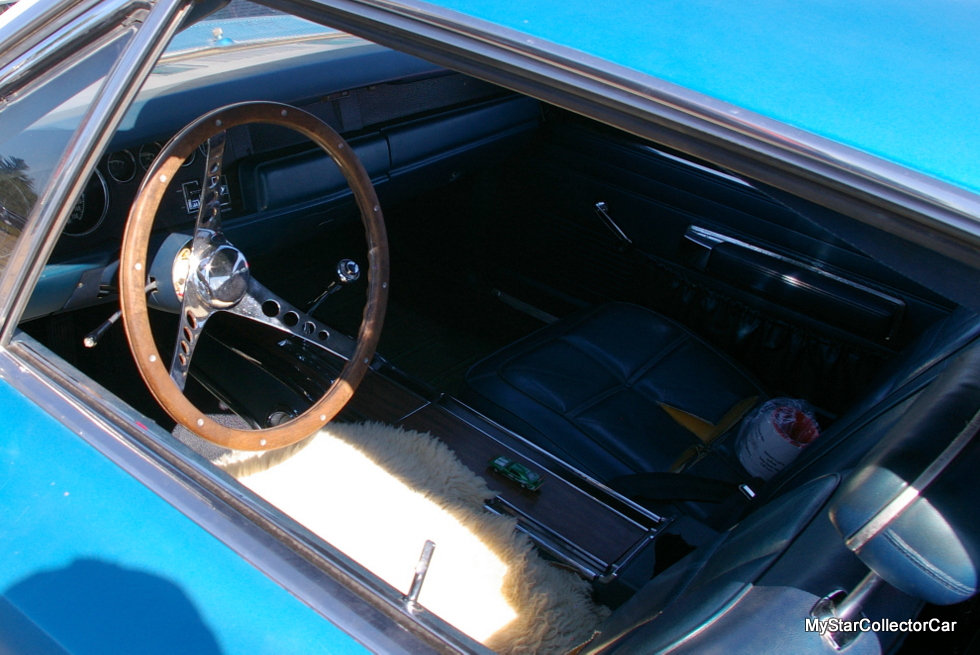 Bobby took the car off the road in 1979 for a long hibernation because he knew the car was rare and he didn’t want to put it through any more winters. He thought he’d like to do a full restoration “some day” but the biggest goal was simply to keep the car in his possession. This wasn’t a pristine car when Bobby bought it—he described it as “a hard life” so when he bought the Daytona it was already showing several war wounds. Bobby added a few more wounds after a drunk driver ran into the driver’s side quarter panel and the hood blew off when Bobby “forgot to fasten the hood pins”. 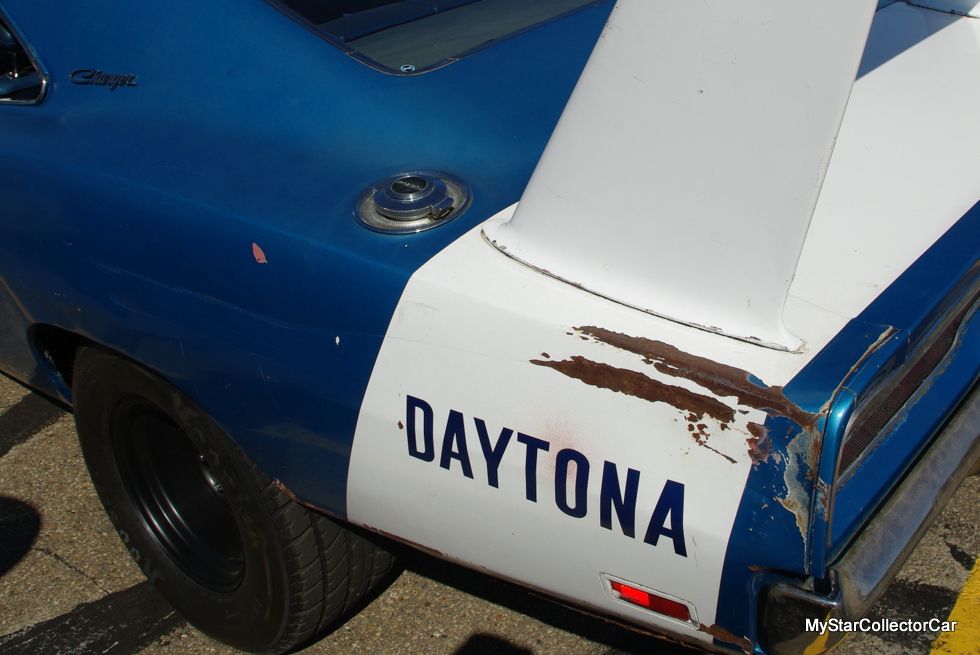 The white replacement hood isn’t a true Daytona hood because it doesn’t have the proper ribs underneath. 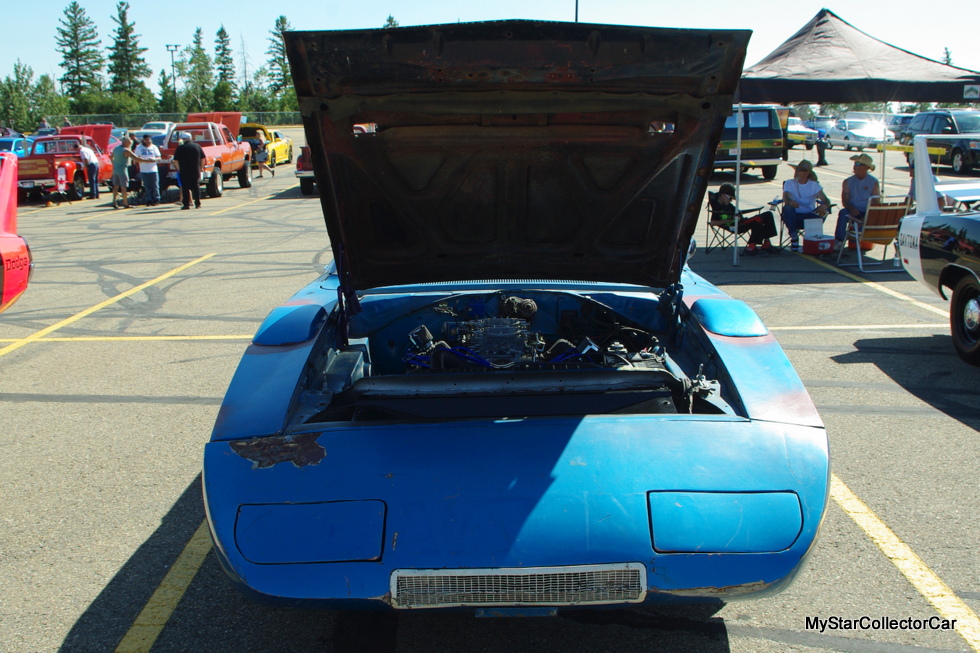 1979 was an era when factory hemi short blocks were still available from connected suppliers so Bobby picked up a date stamped July, 1969 block in ’79 for his future project. 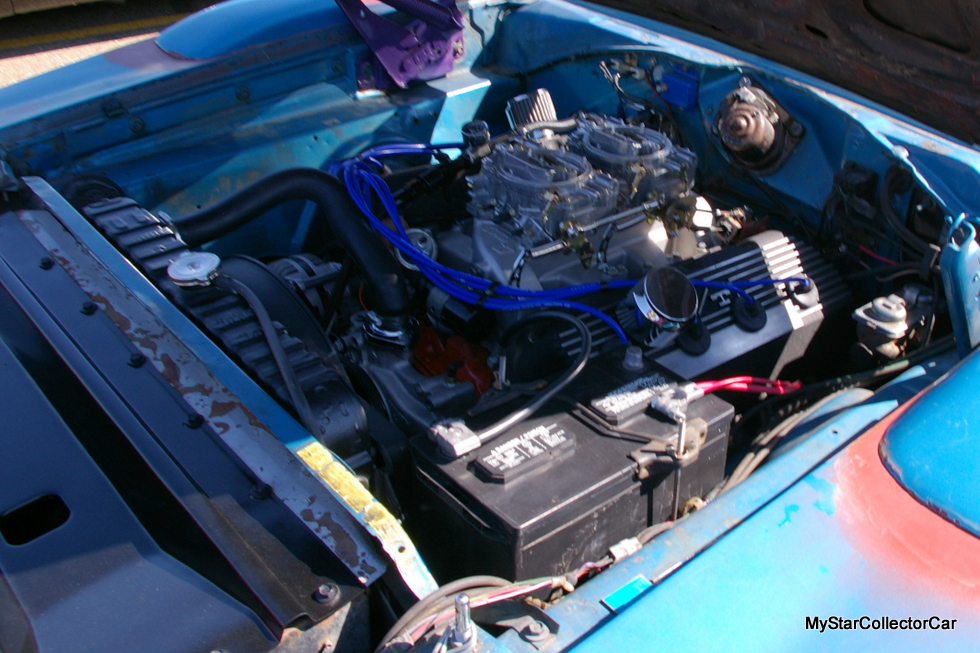 His Daytona was originally a 440 car but it was long gone so Bobby knew a date correct block was worth its weight in gold for the car.

Bobby made a big decision many years later when he decided to put the Daytona back on the road. He decided to say. “screw the resto” because he wasn’t “getting any younger” so the focus was to get it running  again with the factory hemi under the hood.

This Daytona still has its original interior and you can see how many layers of paint (and the colors) on a patch of metal on the front fender.  Bobby admits the rear stripe isn’t configured properly but he did use original letters. 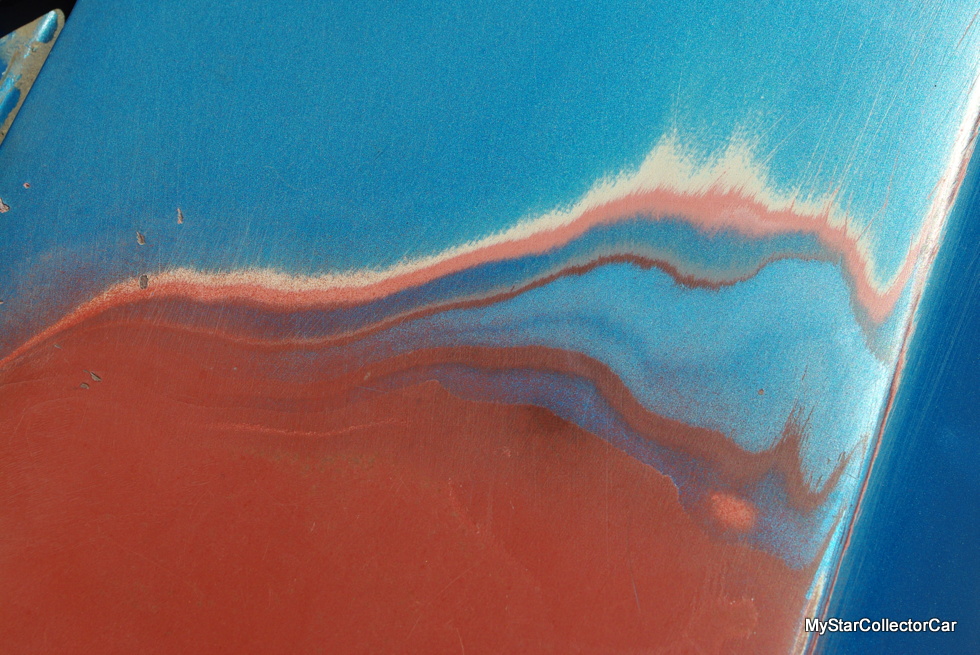 He went with aluminum heads and a built transmission (handles 1000 horsepower), 4:10 gears on an 8 ¾ rear end with an aftermarket overdrive to drop the rpms on the highway.  The car was running on a Saturday and by Thursday it was in Alabama doing “1st shakedown run” laps on the world famous Talladaga Speedway. 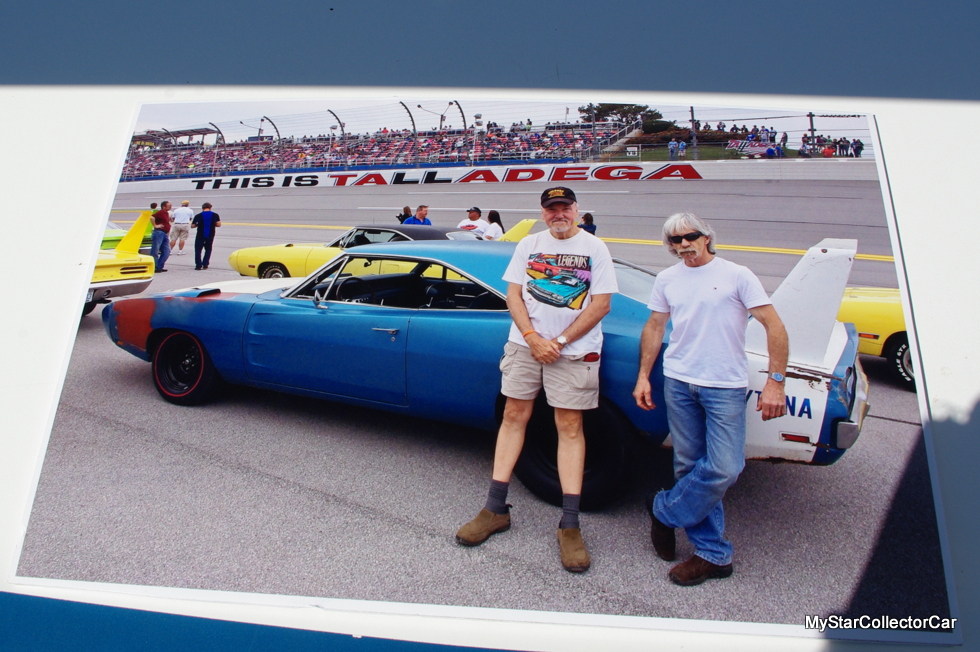 Bobby was there for a Winged Warriors meet and he met NASCAR driver Charlie Glotzbach plus he had Larry Rathgeb (the engineer behind the Daytona racing program). Bobby described the Winged Warrior meet at Talladega like “going to the Vatican and meeting the Pope”. 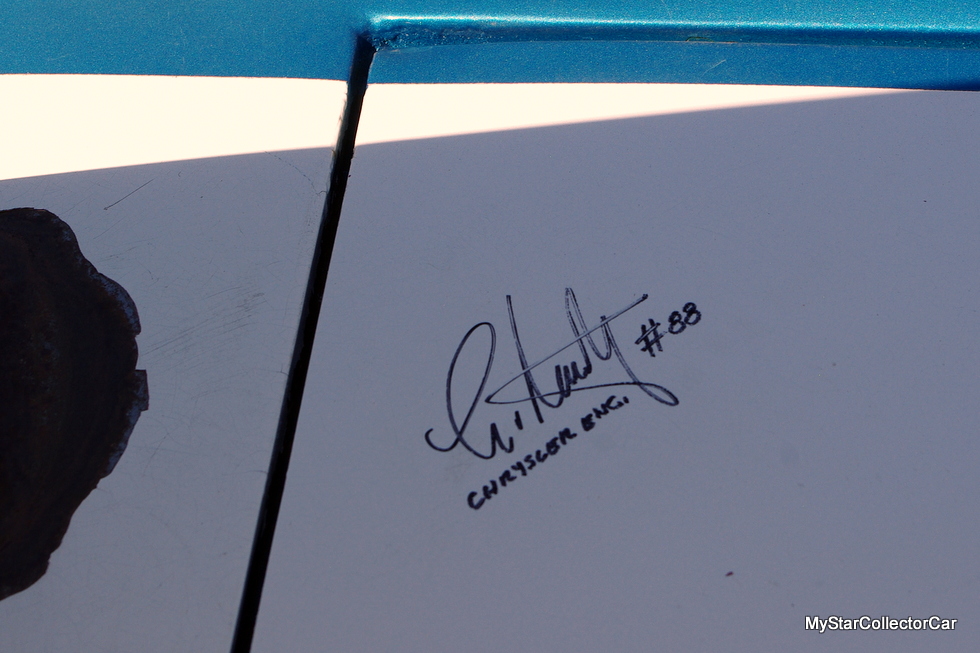 Bobby built this car for fun and he’s certainly met his goals because he lets kids sit on the wing but he cautions them with these words—“this is the only Daytona they can do that on.” 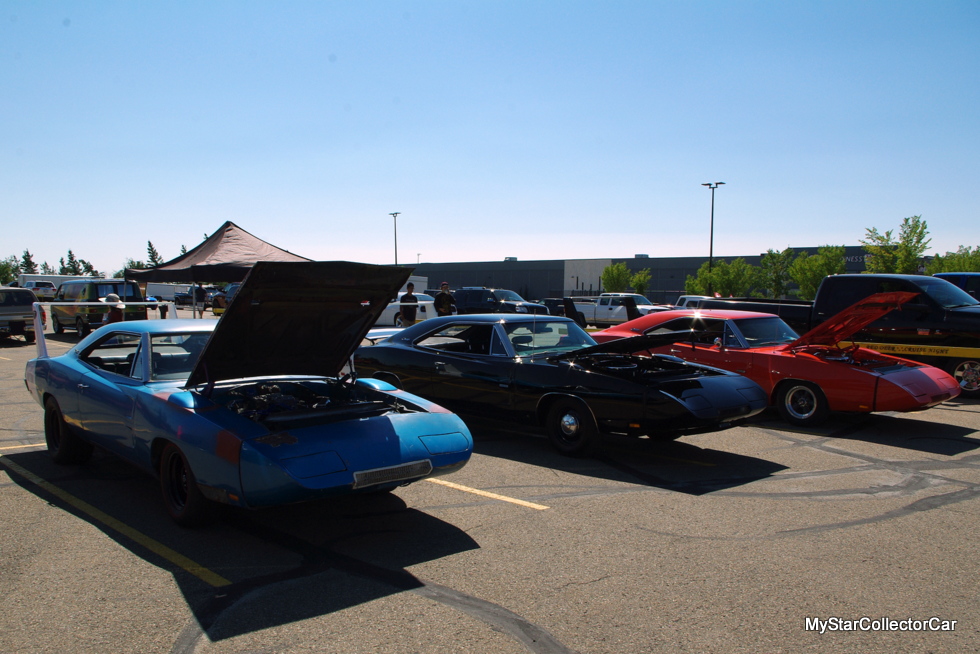 In the end, this car was bought for fun and built for fun—that’s the road not taken by most car guys who own these rare Daytonas.