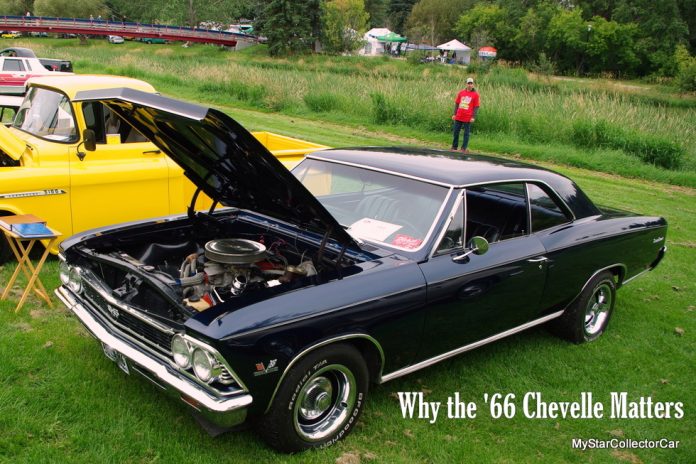 There are some compelling reasons why the 1966 Chevelle was an important model in the GM lineup when it debuted in Chevy showrooms all those years ago.

Every car guy is aware the Chevelle models were already in production for two years when they were introduced to the buying public in 1964 as a mid-sized intermediate model to compete with their rivals in this ‘tweener market.

The pioneer 1964-65 Chevelles were square-bodied cars that had some trouble setting car guy souls on fire because of their utilitarian design.

The first-gen Chevelles were built to be taxi cabs and kid haulers in four door sedan form, while the convertible and two-door hardtop versions fought a losing battle in a futile attempt to be sporty models.

The 1964-65 Chevelles looked like their designers relied heavily on a straight edge during the creative phase of the car’s development and instead leaned heavily into a practical game plan for the car model.

The game changed dramatically for Chevelle models with the introduction of the 1966 versions and MyStarCollectorCar believes the ’66 Chevelle is an important soldier in the muscle car wars from that golden automotive era.

The 1966 Chevelle had a radically different design when compared to the 1964-65 models. The squarish blandness of its predecessors was replaced by a muscled-out exterior that looked fast even at a standstill.

The front end of the ’66 Chevelle was re-designed to reflect the new direction for the car and had a more aerodynamic look to it. The corners of the front grille swept back into the fenders and had both style and a better ability to cheat the wind.

Even the fake hood scoop bulges on the 1966 Chevelle SS models made people forget the earlier 1964-65 models were purpose-designed for practical customers. There was now menace under the hood of the Chevelle models that proudly bore the SS 396 badge of honor-and the hood scoops reminded the competition there was a new sheriff in Chevy town.

The back end of the Chevelle also underwent a major style change and reflected the car’s new bad attitude. The introduction of a 396 big block option for the 1966 Chevelle also meant plenty of other drivers were destined to see the back end of the car on a regular basis because these muscled-out intermediates (A Bodies in General Motors world) were fast and furious.

The taillights on a 1966 Chevelle were also completely different from the earlier 1964-65 models. The ’66 models had a completely new rectangular design that was flowed along the rear end into the inside of the rear quarter panel and was smaller than a 1965 Chevelle’s larger and squarer taillights.

A side view of the ’66 Chevelle also reflected the new style direction for the car because it now looked like it was now lean, mean and built for speed.

We at MyStarCollectorCar believe the 1966 Chevelle was indeed all of the above in its street fighting form.

These three automotive attributes made it an important part of the Chevelle legacy.

MSCC APRIL 6 “WHAT’S IT?” WEDNESDAY—APRIL IS A GOOD MONTH FOR...