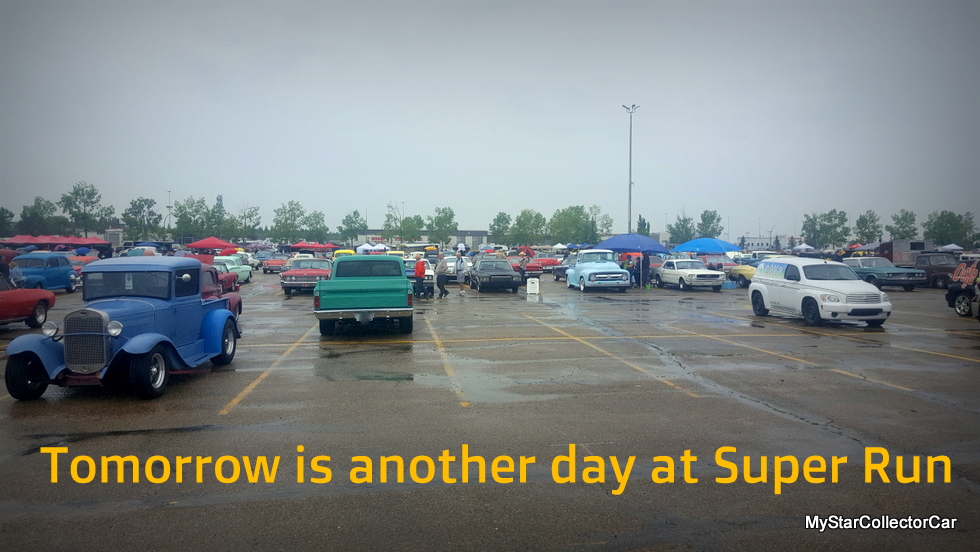 Car show organizers are some of the biggest risk takers in the world because they are heavily dependent upon the weather when it comes to their events.

In simple terms, bad weather means attendance will suffer from both a participant and spectator point of view. 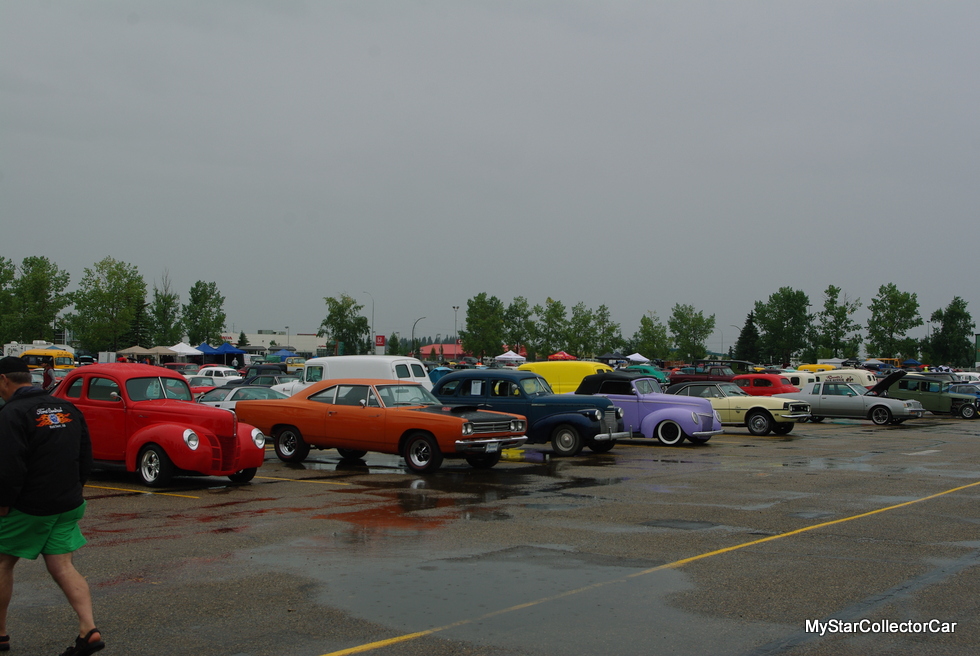 No show is immune to the effects of bad weather so car show organizers have to roll the dice and hope for the best when their opportunity to host an event takes place. Red Deer, Alberta’s Super Run organizers get to host their event every three years and they begin to prepare for their car show almost as soon as their last show’s completion. 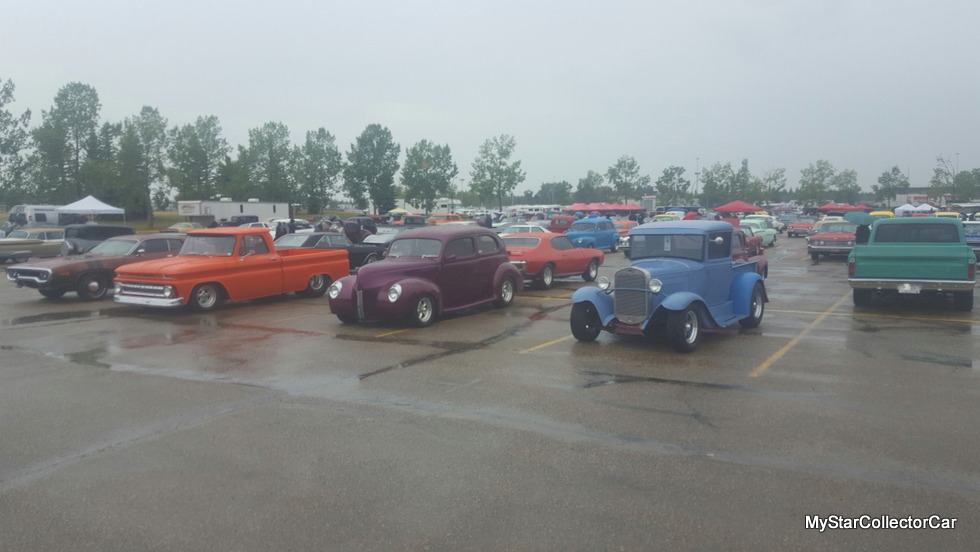 The Rock’n Red Deer event has many components because it is essentially a 6-day event with many cruises/excursions planned in advance for other areas in the central Alberta region. Large outdoor car shows require plenty of volunteers and a generous supply of organization to run a successful event-but they are still at the mercy of the weather gods. 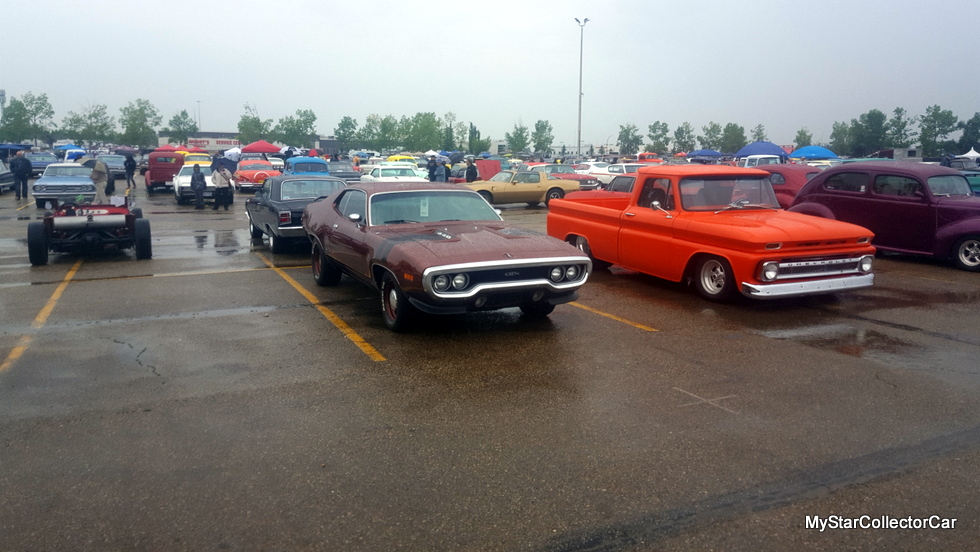 Red Deer’s version of the Super Run has enjoyed many shows where the weather was perfect since they began to host these once-every-three-years events in 1997. However, the Saturday portion of the show was hit with a monsoon this year and the bad weather had a negative impact on the day. 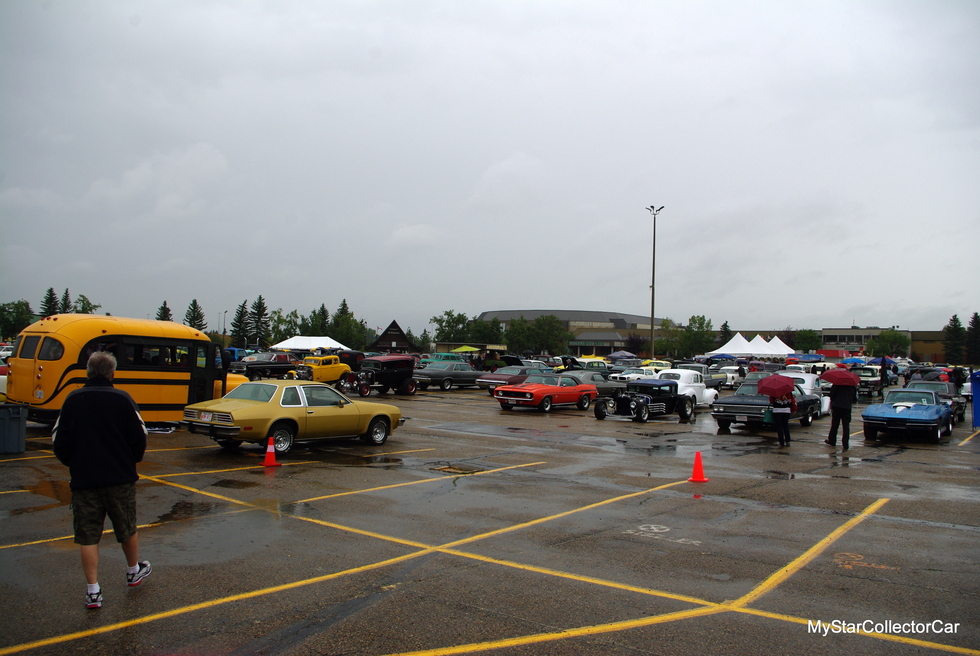 The weather in Red Deer is pretty stable at this time of the summer season but there are no guarantees that every year will have good weather. 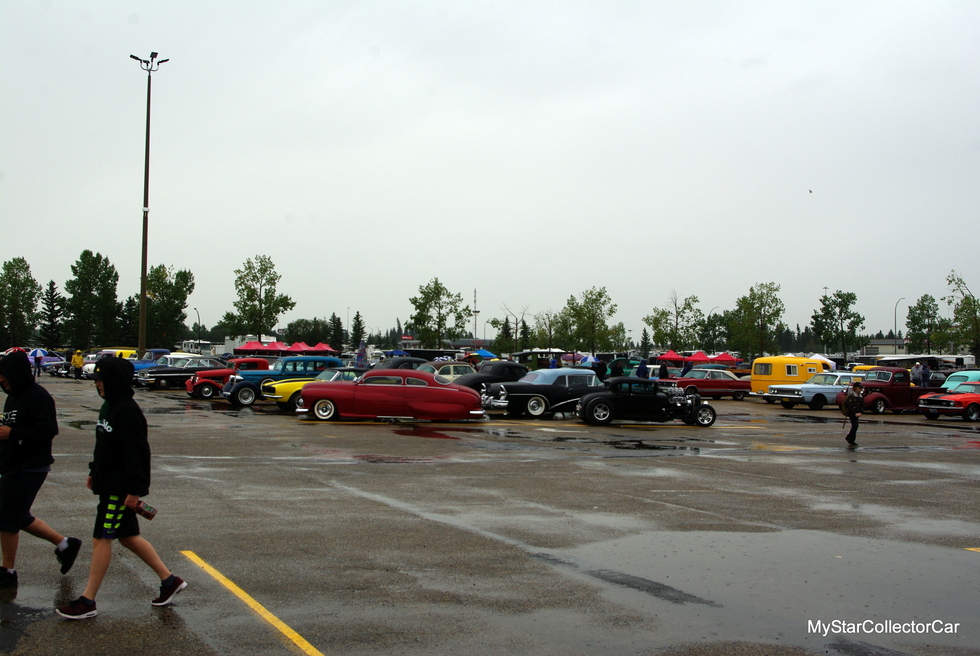 MyStarCollectorCar attended the Saturday portion of the two day show and were surprised that so many vintage rides were on display at the Westerner grounds for the show. We were not surprised to find vehicles-but no owners, given the rainy weather. 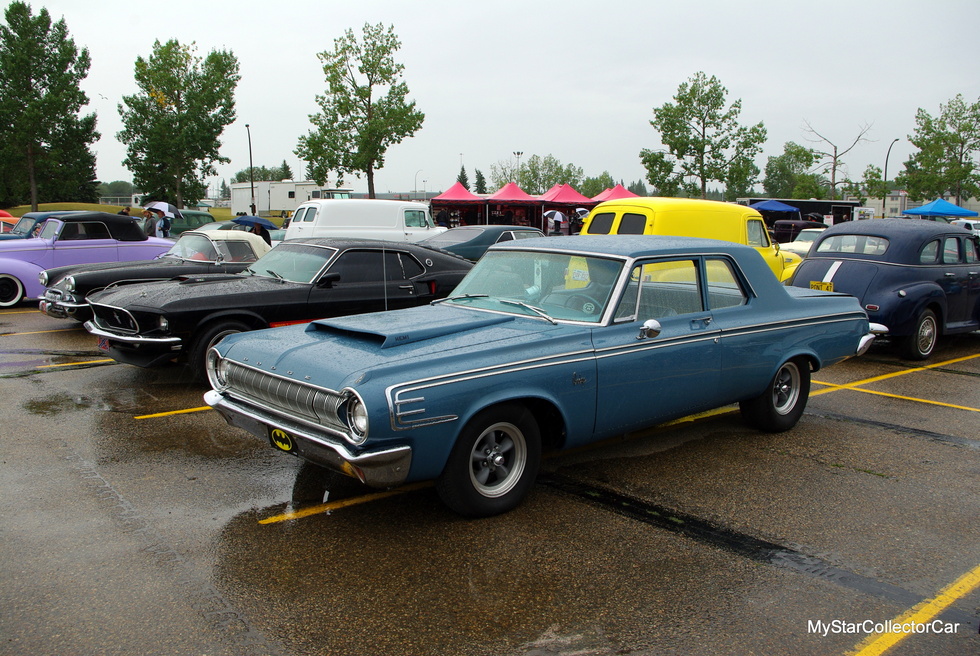 A 1955 Mercury Montclair convertible arrived at the show and we chased down the owner as he and his wife circled the event in the car to have a look at the other rides at the show. Eventually we enlisted the help of Rock’n Red Deer Super Run President Stu Sheppard to track down the car’s owner. 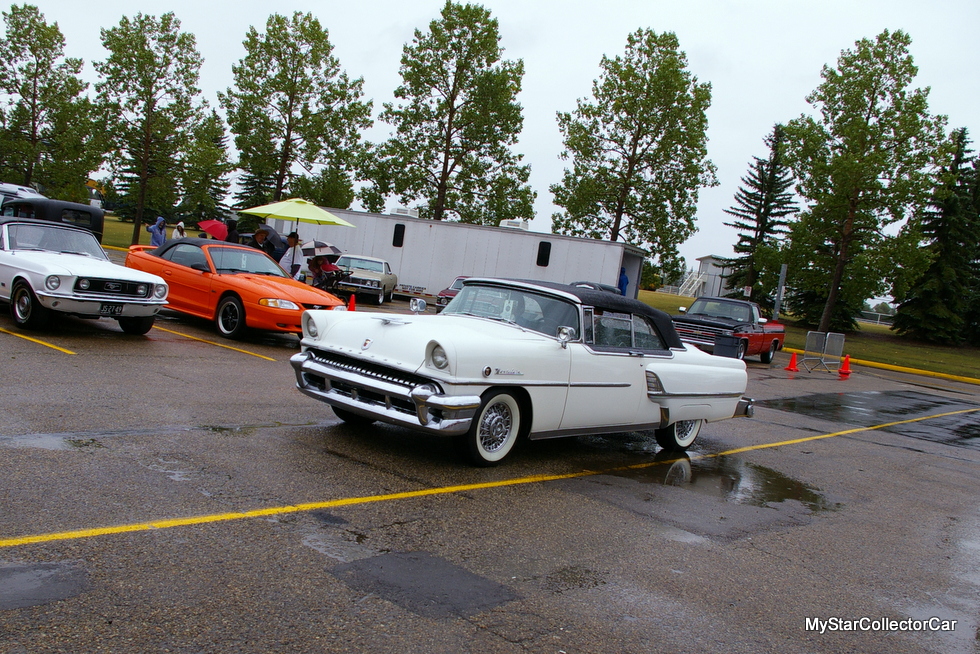 The car will be showcased on MyStarCollector in a future article because this convertible is a very rare model. The ’55 Merc has undergone a major restoration and MSCC can confirm that its new convertible top doesn’t leak-even during a torrential downpour because we did the interview inside the car to keep a dry notebook.

A 1974 Plymouth Duster was also a good place to escape the rain and MyStar was able to conduct a full interview with this rare full-load Plymouth inside the car. 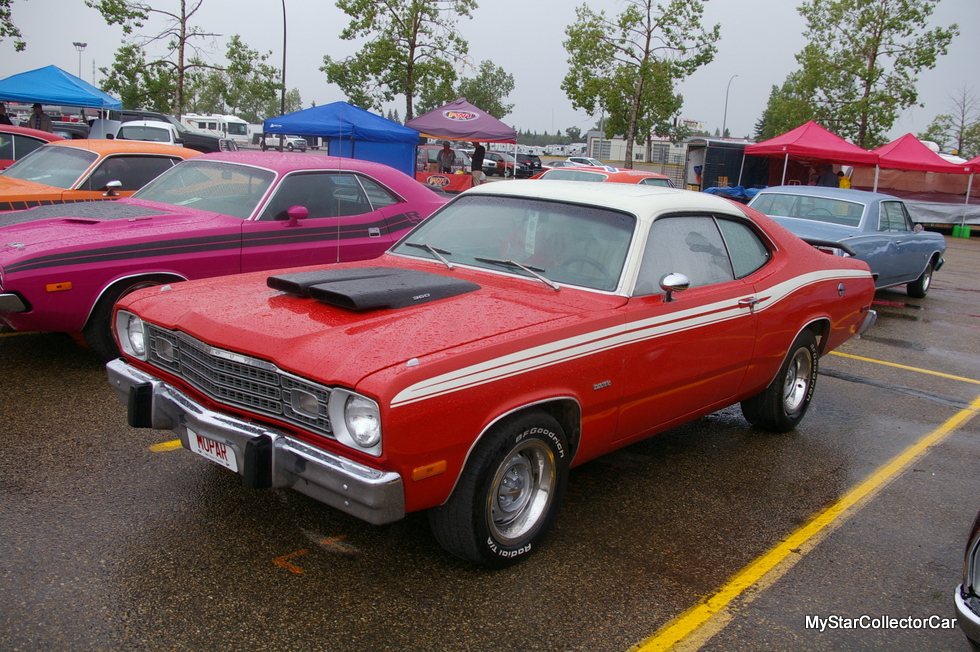 It’s worth mentioning the Duster’s factory moon roof also did not leak during the heavy rain storm interview. 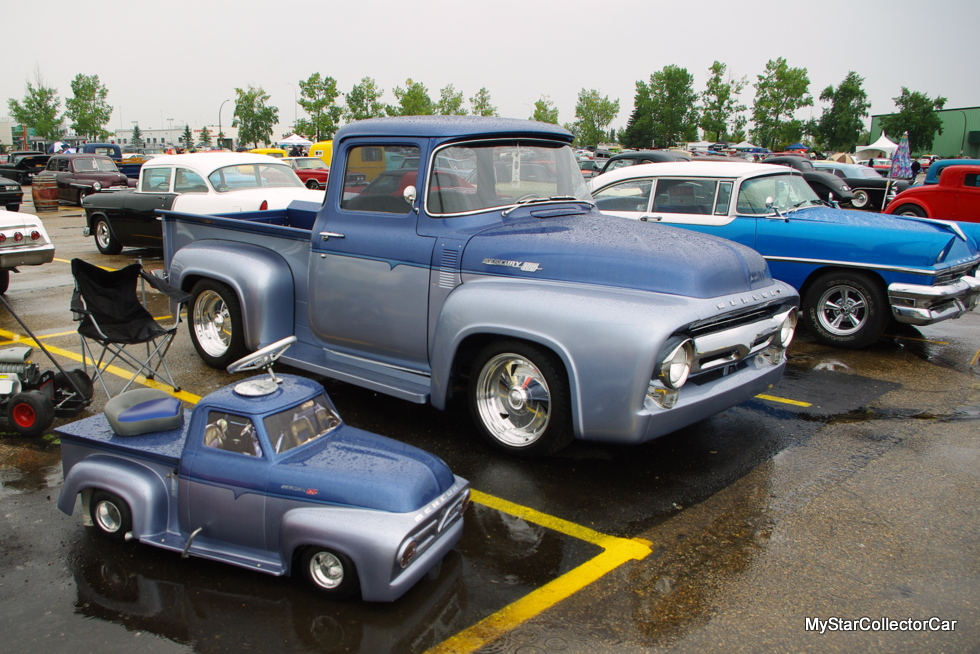 A vintage Mercury pickup and a stock 1950s Buick from the early 1950s also caught our attention at the Rock’n Red Deer Super Run show. 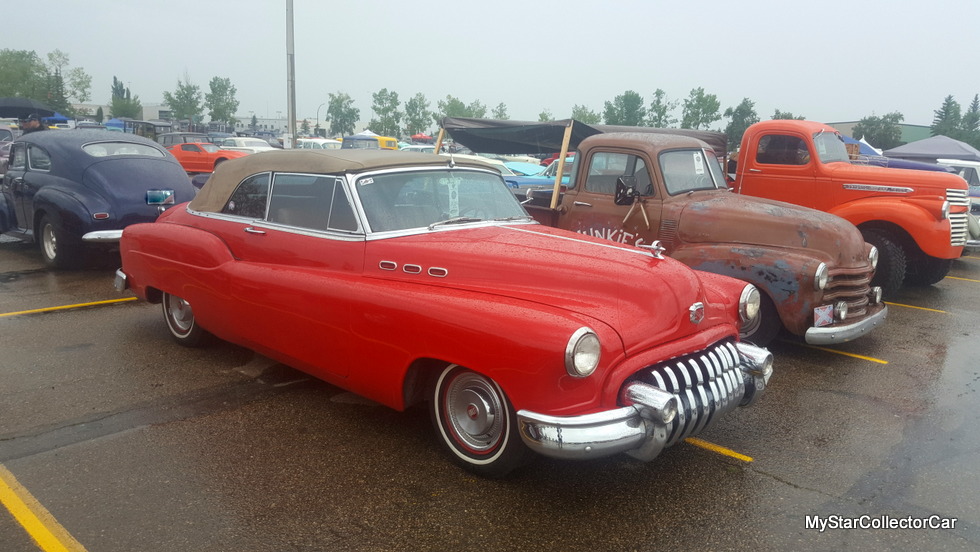 Unfortunately, we were unable to track down their owners during the Saturday portion of the show.

However, we intend to revisit the event during the Sunday portion of the show and gather their stories before these car guys and girls hit the road in their classic rides.

We intend to watch this show go from CCR’s ‘Who’ll Stop the Rain’ to the Beatles’ ‘Here Comes the Sun’. In 24 hours or less.