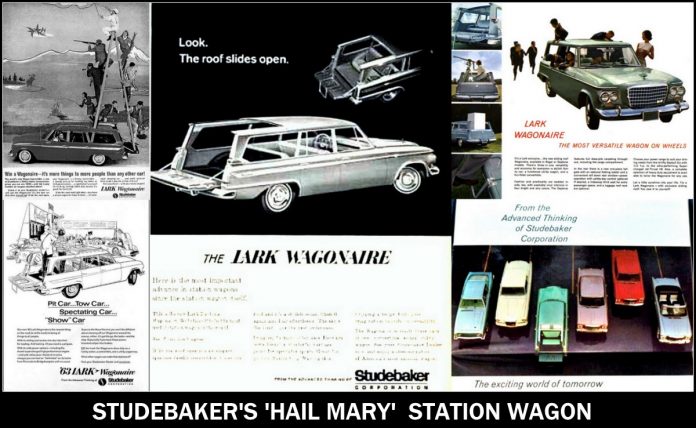 Lack of funds is a good motivator for businesses because it forces them to become creative, innovative and any other adjective that helps shaky businesses weather another financial storm.

The driving force behind Studebaker during their final few decades as a struggling domestic automotive company was similar to the Bee Gees’ song that topped the charts 11 years after the last Studey left the factory in Hamilton, Ontario of all places–namely ‘Stayin Alive’. Studebaker did not stay alive–but it gave the survival concept its best effort.

Studebaker worked miracles with a small budget during its slow death. They turned cars into pickup trucks, designed one of the ugliest cars to ever grace a showroom (1950-52 “Bullet-nosed” Studeys), while designing two of the most attractive cars to ever grace a showroom (Studebaker Golden Hawks and Avantis) before building the Wagonaire on Studey’s way out the door.

None of the aforementioned examples of unchecked automotive creativity were enough to save Studebaker from crashing and burning in a financial sense, but they kept the “little company that could” in the discussion in the car builder community.

The Studebaker Wagonaire rolled out of their South Bend, Indiana plant in 1963, with the last model leaving the Hamilton factory on March 16, 1966-presumably to give factory workers time to get a good seat at local St. Paddy’s Day bars the next day.

The three-year production run for the Studebaker Lark Wagonaire model was indeed a Hail Mary pass for the little car company, but the Wagonaire was also a bold gamble for the Studey boys.

The Wagonaire name may seem somewhat familiar to MyStarCollectorCar readers because of its similarity to the famous Wagoneer handle of Jeep fame. The confusion may be well-founded since the designer of both models was a man named Brooks Stevens.

Stevens brought a unique feature to the Studebaker Wagonaire in the form of a retractable rear roof, so the “air” in Wagonaire meant fresh air. The retractable roof was a great idea- but had a serious drawback in its basic design since it leaked like a sieve during any precipitation event in the real world.

The problem became severe enough for Studebaker to offer a fixed roof for customers who preferred drier inner quarters during a rainstorm (or snowstorm for that matter) while on the road. The retractable roof had a series of drainage tubes built into the design, but they were no match for Mother Nature in a bad mood.

The leaky roof issue ensured the Wagonaire was destined to rust in peace from the inside, so there are few examples of these unusual station wagons left in 2021. Additionally, only 11,000 Wagonaire models were sold in 1963- the best sales year for Studey. As well, only 904 Studebaker Lark station wagons were built in 1966, with an unknown number of fixed roof models because buyers were not impressed with the leak issues on the Wagonaire.

Top Silverado Camping Parts | The Haul Get Your Silverado...