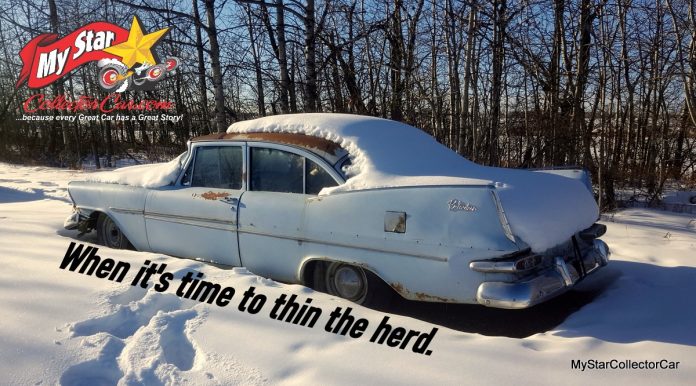 The logic against a car crop is impeccable—most car guys would need ten lifetimes to finish what they have in their healing line.

In my case, it came down to logistics because I simply ran out of places to stash the car crop, so the only option was to dump everything.

I had an accomplice—my brother Jim (co-founder of MyStarCollectorCar. He added his own classics to the fleet in the form of a ’71 Duster, a ’70 Dodge pickup and an ’80 Celica. He also, at various times, had a ’62 Lincoln, a ‘56 Dodge four-door (Canadian Plodge), and a ’65 Mustang in his lineup.

Jim and I had access to a garage that could handle three cars inside and three outside. The three cars outside were the ones that tested the limits of bylaw enforcement officers, so eventually three cars were moved to a spot in the back 40 acres of a buddy’s farm.

That lineup included my ’58 Dodge Regent two-door hardtop (Plodge), my ’58 Dodge Mayfair four-door hardtop (another Plodge), and Jim’s trusty old Duster. That left a revolving door back at the garage—I had a ’59 Plymouth Belvedere two-door sedan project in and out of the garage for years.

The Plymouth had a few roommates over the years including Jim’s Lincoln, Mustang, Dodge truck, ’56 Dodge, and the ’59 Plymouth Belvedere two-door sedan project car. It did time outside and inside the garage.

The Plymouth took up two spaces in the garage when its frame and body sat next to each other for a few years, but most of the time there were always three vehicles in the garage. The storage for the three cars on the farm changed when the property was sold, so they were moved to another spot on the back 40 of another farm.

The garage wasn’t an option for the last several years, so when my nephew built an acreage, I cut a deal where he would own the ’58 Mayfair four-door hardtop in return for storage of the other ’58 Dodge, the Duster, the 1959 Plymouth Belvedere two-door sedan, the ’56 Dodge and the Dodge truck.  The ’59 Plymouth sedan, the ’56 Dodge and the ’70 Dodge truck spent a winter in storage on a lot before they moved to the acreage.

My nephew sold his acreage, so this was the turning point in the car crop. Another nephew bought the Dodge truck and the ’56 Dodge because they were both runners–then the other cars were moved to a buddy’s place.

That was the final stage for the car crop because they were all listed for sale–eventually the Duster, the ’58 Dodge and the ’59 Plymouth found new homes. The other ’58 Dodge 4-door went to my nephew’s new farm in northern BC.

That’s why you thin a car crop—reality punches you in the face. I would love to have most of them around to this day, but they probably wouldn’t have migrated to running and restored without time, money, talent, and a great shop to push them past the finish line.