There used to be a simple formula for summer holidays when I was a kid.

I came from a large family, even by Baby Boomer standards, so ten kids in one car was not an option.

My parents solved that problem by spreading out their kids over a 22 year period.

But, even if the full family team was not in the car, it still meant a very crowded vehicle on the road. The creature comforts included an array of comics to pass the time, windows that rolled down, and a canvas bag of water that hung on the front of the car.

Most road trips also included a picnic along the way. The big ticket items were sealed jugs full of Kool Aid, a solid number of sandwich choices, and a couple of boxes of potato chips.

Amusement after the comics were read included a game of car make, model and year identification for me and my twin brother Jerry. The fact that most models changed dramatically from year to year made the competition fierce between the two of us on those trips.

We got to be pretty good at the game because both of us had inherited the car guy gene from my dad. It was a DNA link that was shared by five of my six brothers and explained why all of us fight a serious addiction to old car disease.

These days the game of ‘name that car’ would provide a very large challenge for anybody, but it would also be unnecessary. The car makes closely resemble each other and the yearly changes are not obvious, but that would not matter on a 2010 road trip.

The air-conditioned comfort of a modern ride would be a minor part of the road trip. The on board TV system would eliminate any need for a kid to actually look out the window-let alone give a rat’s ass about the scenery.

Most kids will choose the fantasy world of warfare on the minivan screen over the majestic Rocky Mountains every day and all day. Nothing says real like computer generated imagery to a kid today.

The only real competition for the X-Box for a kid’s attention on today’s family vacations is likely the multi-functional BlackBerry and its competitors. The kid will get over-developed thumbs while he texts his buddies about the road trip that he has not even noticed-beyond a sincere wish not to be on it.

Mercifully there is a solution to this problem of a modern kid with no kinship to a real family road trip. Buy an old 60s sedan or wagon with no a/c and an “am – only” radio and head for the open road with junior.

Introduce him to a bygone era where road amusement was found in its simplest form in a Superman comic or a look out the car window as the world breezed by at 60 mph. The visceral experience of the open road in a noisy old car will re-define the summer holiday philosophy for the kid. 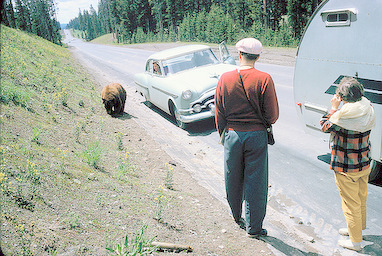 He will either love the experience or you’ll get a call from his lawyers.

DENNIS:”When you’re riding around in a Model T like I do at 35 MPH, there’s plenty of time to look at the scenery. Too bad there aren’t any more “Burma Shave” signs to read.”