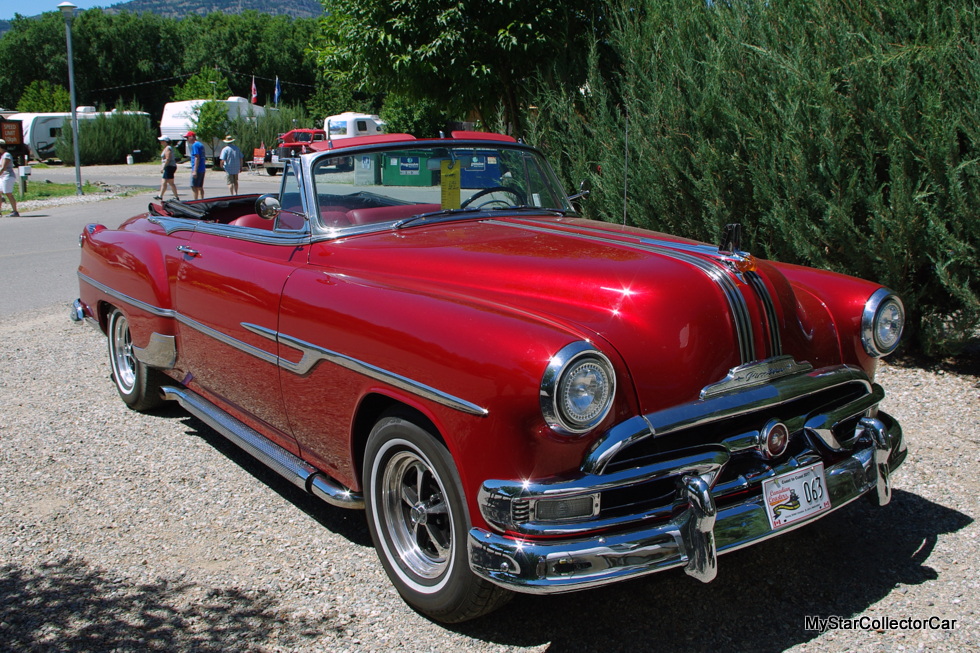 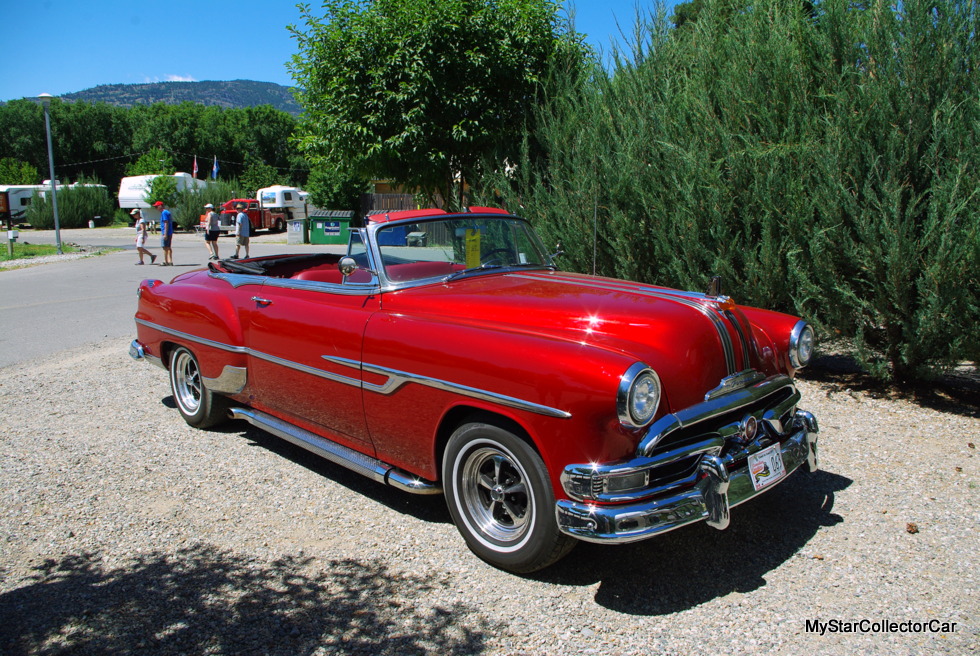 The Canadian Coasters 2017 cars and trucks are stories on their own simply because they are making history with every mile they go.

These vehicles also had some great back stories before they were drafted into the Coasters tour.

This 1953 Pontiac Chieftain convertible has an amazing back story. 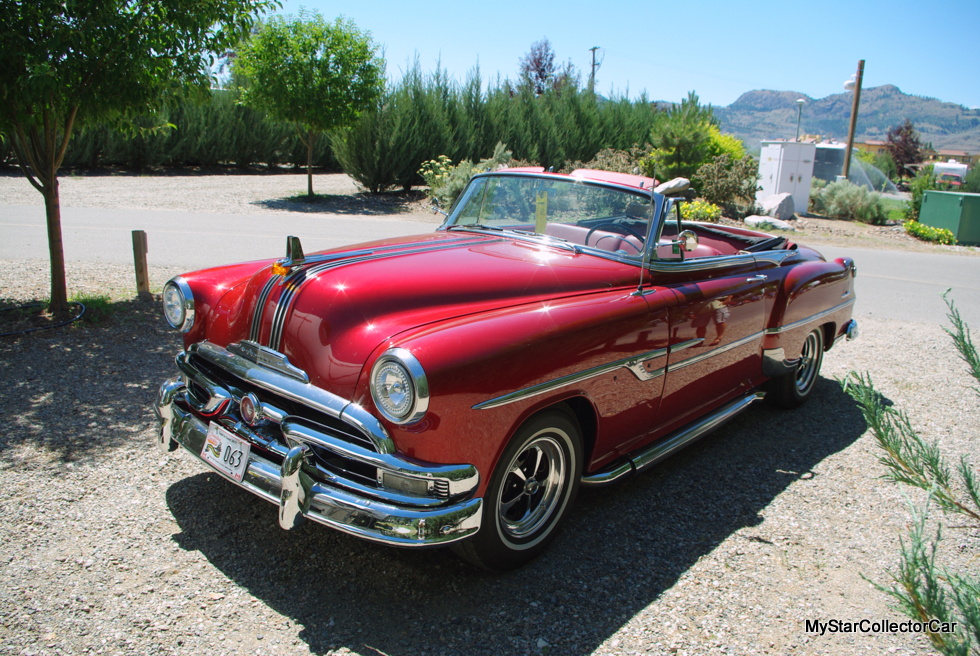 Rodney Trytten has owned the rare Poncho since 1980 and it was a legitimate barn find. His uncle bought the ’53 Pontiac back in 1956 when it was a gently used, 3-year-old car.

Rod’s uncle drove it for a few years, added the custom rear fins in the early 60s then he parked it in a garage for several decades because he “wanted to fix it up when he could afford it”. 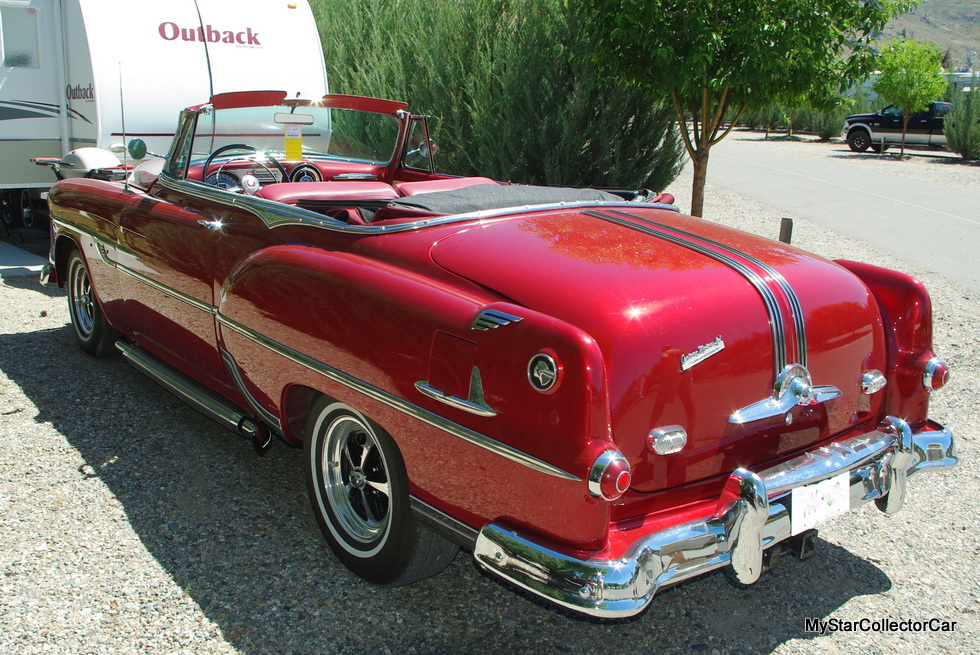 Rod’s uncle let him “drive the car when he was too young to drive” so it was definitely his “favorite car”. His uncle was a big influence on a young Rod so he was very willing to buy the family legacy Pontiac in 1980. 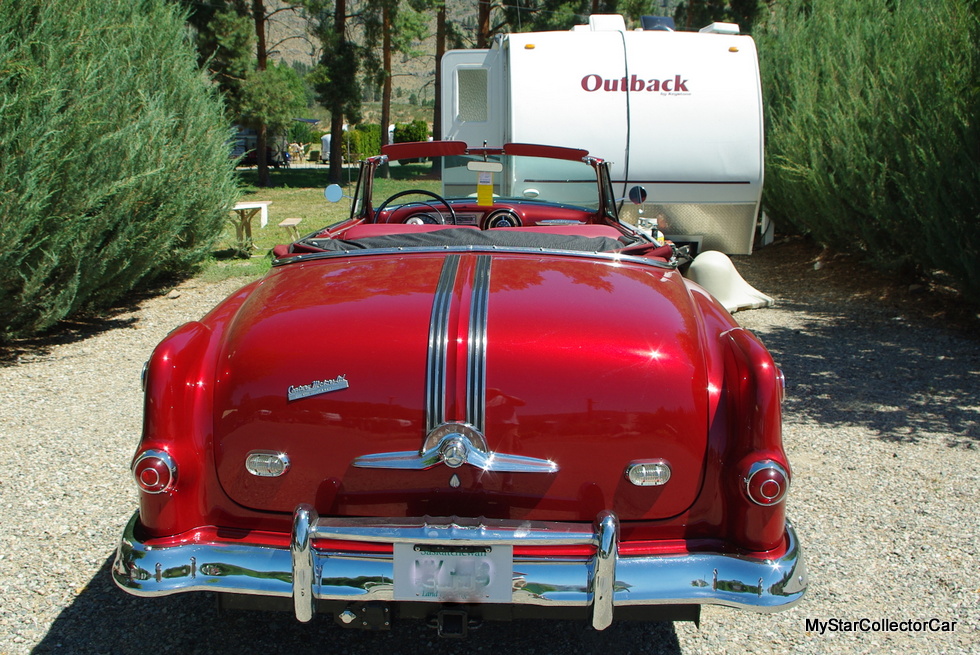 The car was in great shape back then because it was “put away before they put salt on the roads” but Rod admitted he didn’t store the dry Pontiac very well. He stored it in a steel building where there was water “leaking into the carpet” so the otherwise pristine ’53 Chieftain convertible had some bad floors.

Rod’s uncle passed away and the Pontiac became a focus for him. He wanted to go in a different direction with it so he turned it into a resto-mod project. There’s a 396 big block under the hood and he reinforced the frame with 3/16” steel to handle the extra power. 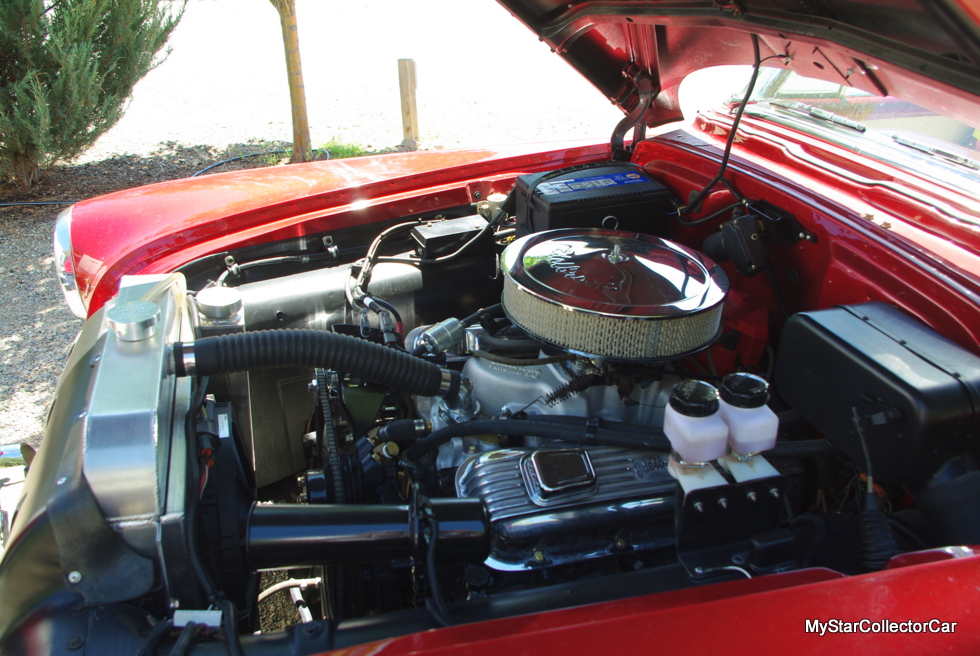 Rod made some logical upgrades to the Chieftain when he added disc brakes to the front and bigger drums in the rear. He’s a farmer so practical alterations make sense when you’re hauling a trailer across a large country with plenty of challenging driving experiences. 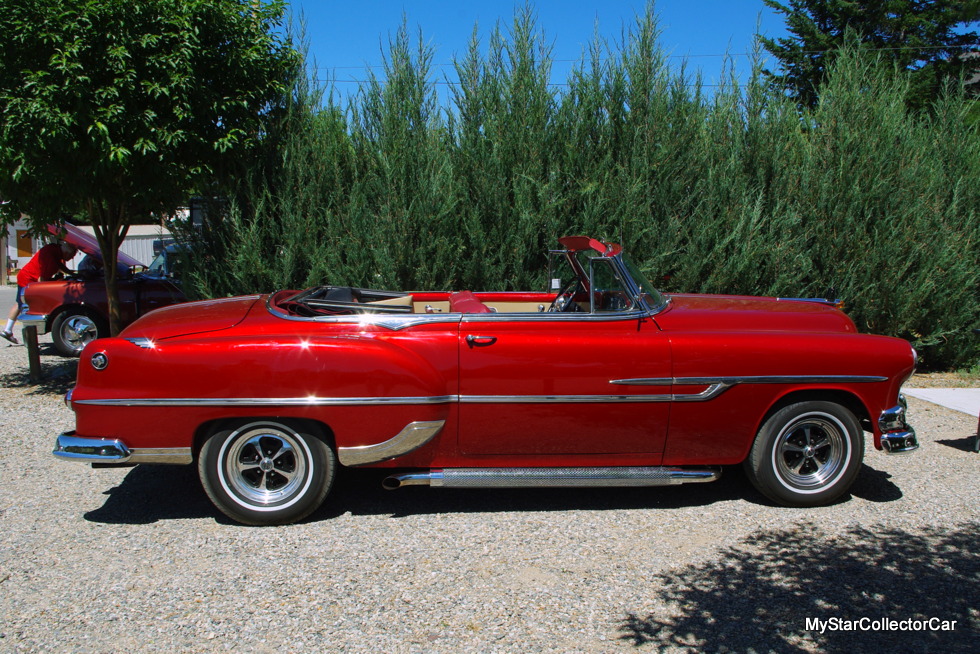 There’s an air ride system under the car to handle the extra demands of the trailer plus it gives the Pontiac a much more predictable ride. Rod is a proponent  of hi-tech so this car is wired front  to back with cameras. There’s a camera on the trailer and the car so he can see what’s behind him on the road in any situation. 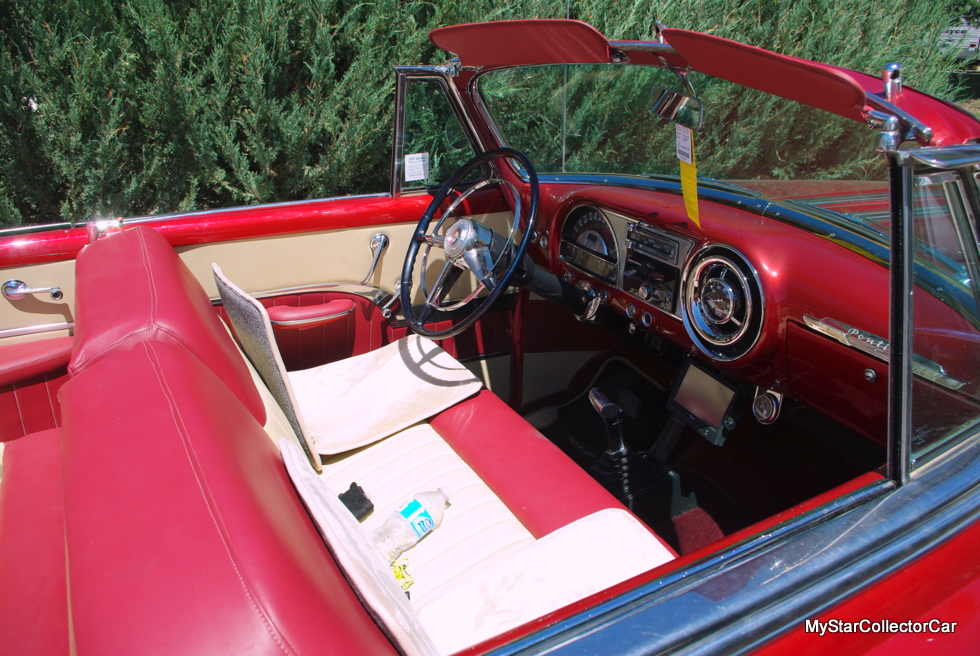 Rod has four TV monitors to see all areas of the car-trailer combination plus he can “hook up the trailer with very little effort” thanks to the camera and the air ride system that boosts the height of the car on command. 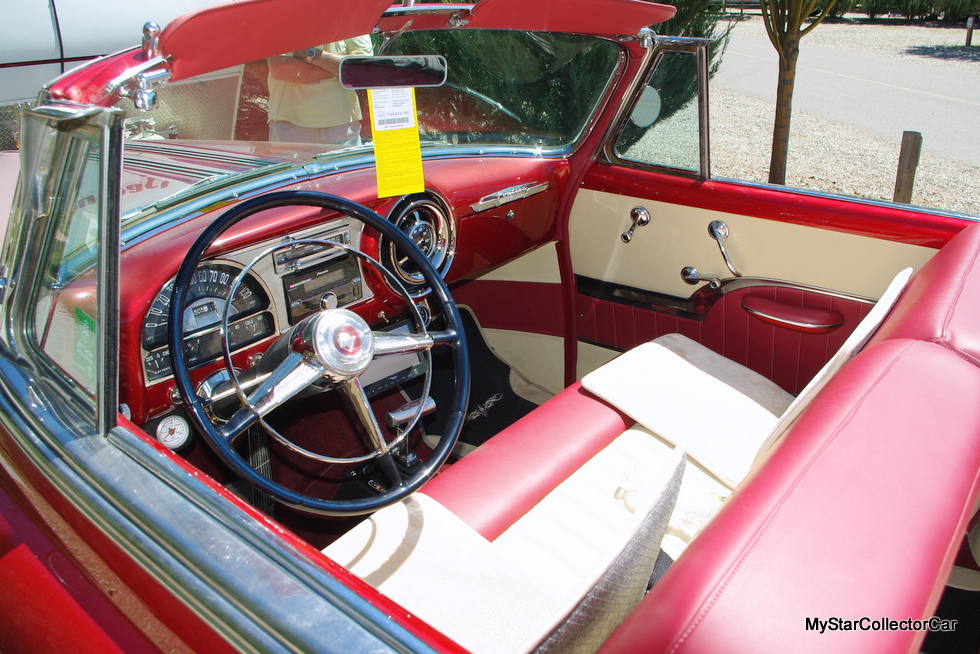 Rod said he “figured they were going to be a lot of miles put on this car” so he wanted every advantage on the road. There is also state of the art lighting in every phase of the car so this Pontiac has come a log way from the factory 6-volt generator system.

Rod’s wife picked out the unique paint for the car—it was a great decision. There is little doubt this car gets a lot of time in the spotlight and Rod said a train engineer “even hit the horn” to show him how much he liked the Pontiac. 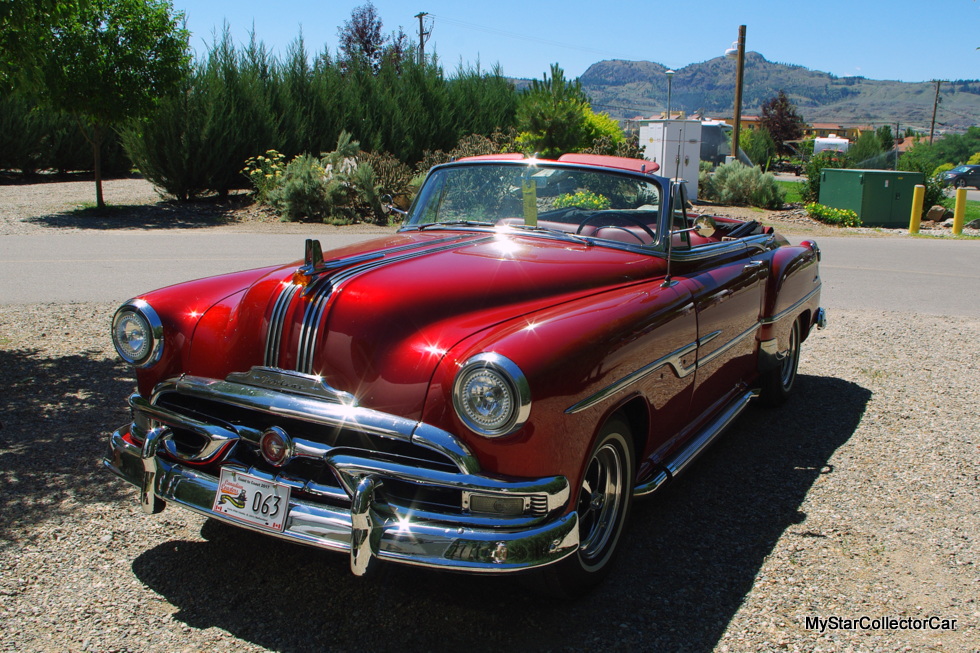 This car is a family legacy from a favorite uncle so Rod made an easy decision on the fate of the fins his uncle added to the car over 55 years ago—they’re still on the car.