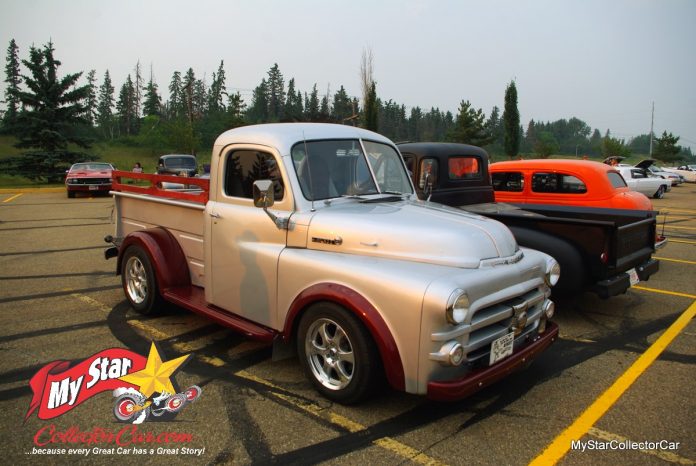 Reg Radford has a long personal history with his 1952 Fargo ½ ton pickup truck because he knew the previous owner very well since the man was Reg’s father.

The last Fargo truck built for the Canadian market left the factory in 1972, so there are likely many younger generations of Canadians who are also unfamiliar with the Canuck truck name. However, the family history of Reg’s ’52 Fargo was a more important factor when he decided to bring the truck back on the road.

Reg grew up on a farm and recalled the truck’s role in the operation after his brother brought it home in the early 1960s. Most farm kids learned how to drive vehicles at an early age and Reg can easily recall driving the Fargo on the family farm.

His father was a large part of Reg’s childhood memories with the Fargo–and he carried that viewpoint well into adulthood. Eventually, the old Fargo was used up by the hard work and banished into forced retirement on a forgotten piece of rural property.

However, Reg never forgot the truck that fondly reminded him of Reg’s younger years with his dad, so he decided to resurrect the 1952 Fargo a few years ago. The Fargo needed plenty of attention after so many years of neglect, so Reg formulated a solid game plan for its restoration.

He decided to build a better version of the original truck, complete with some resto mods that would improve its performance in modern traffic conditions. Reg purchased a 1997 Dodge Dakota so it could be a donor vehicle for the 1952 Fargo, along with a few vintage donor Mopar trucks from that era.

The ‘97 Dakota was in good mechanical condition, with a solid 318 Mopar small block coupled to a 5-speed manual transmission under its hood. The Dakota also provided a frame for the project, although it required a little snip to shorten the frame for use in the Fargo project.

The marriage of the 1997 Dakota frame and the 1952 Fargo body was a success that retained the classic style of the 69-year-old pickup and the performance of the 24-year-old truck. Reg was able to use the comfortable seats from the ’97 Dakota, along with its tilt-steering column. He was also able to drive by every other vehicle on a freeway in the truck before he realized his speedometer was understating his velocity.

Reg added air conditioning to his Fargo, a decision that severely limited access to the fresh air vent in front of the windshield, so he added power to the open/close function in it. Now the truck has the best of both worlds when it comes to a cool passenger cab.

One of the most creative features of the Fargo is its two-tone paint scheme because the colors accentuate the truck’s body lines. The truck’s wooden bed has also been refinished and adds to the fresh new look of the ‘52 Fargo, along with the custom sideboards built by his son in law.

VALENTINE’S DAY–CAN YOU FIND ROMANCE IN THE WORLD OF OLD IRON?

MY FIVE PICKS FOR THE MICHENER-ALLEN COLLECTOR CAR AUCTION