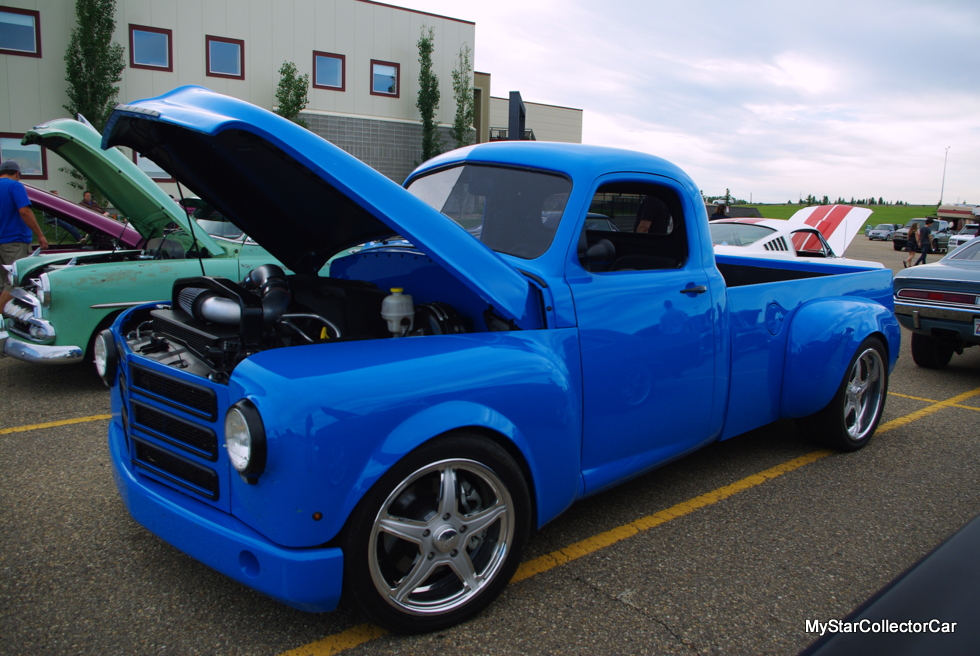 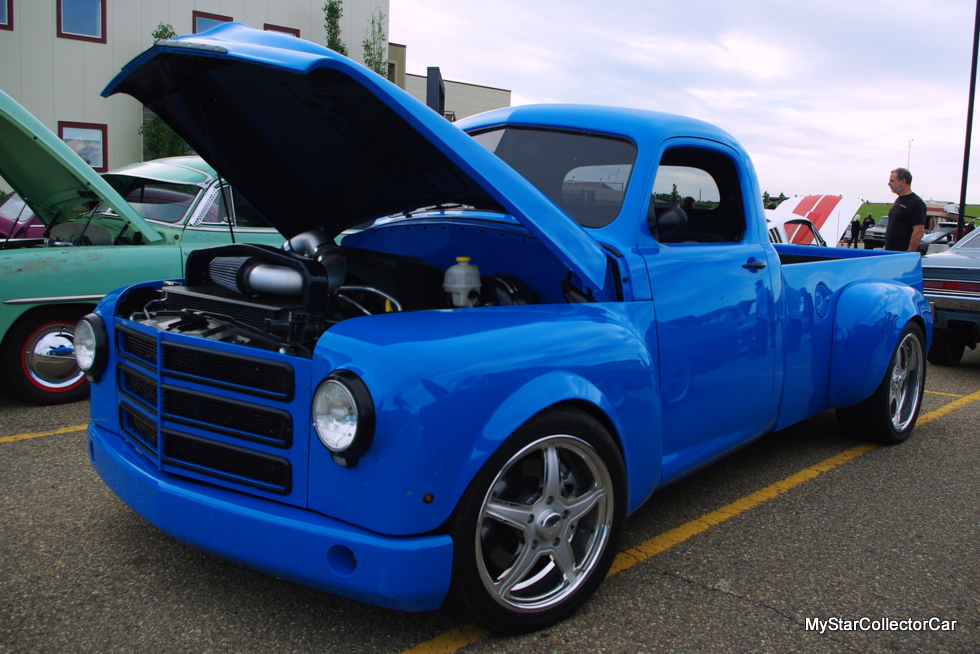 Resto-mods are a big deal in today’s car hobby.

Resto-mods make sense on many levels because you can retain the look of a classic but have the road manners and tech of a new vehicle.

This ’49 Studebaker is an excellent example of a well-planned resto-mod. 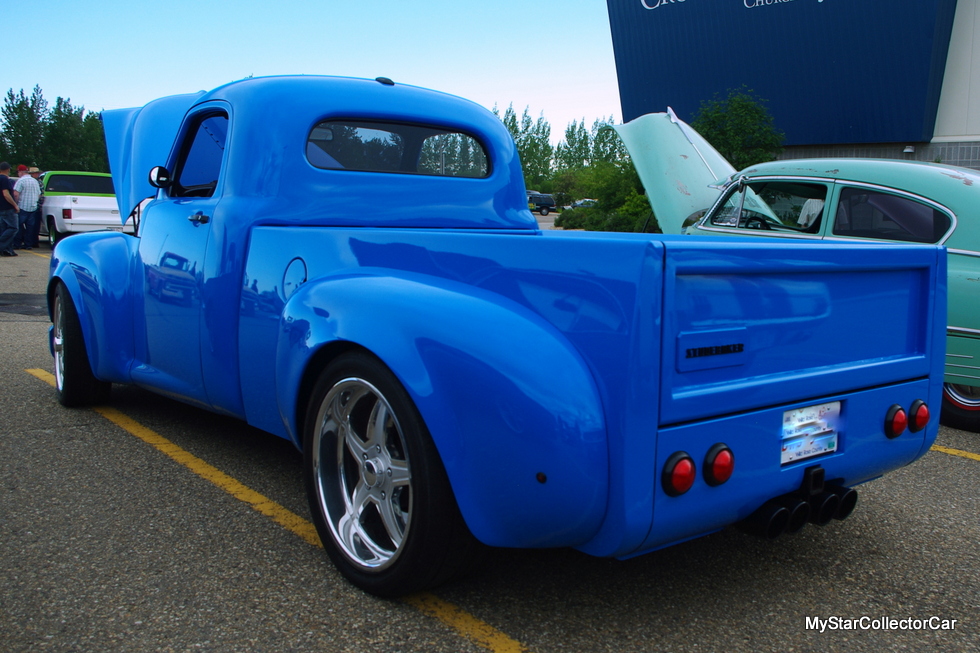 Dennis Berreth is a huge believer in the functionality of a resto-mod and he has a few of them in his build history to underscore his enthusiasm. The Studebaker is his latest creation and it was done at the highest level of a resto-mod.

The first clue to this unique vehicle’s pedigree is found under the hood—there is a 2015 5.7 Dodge Hemi tucked neatly in the engine compartment. This is a radical departure from the typical small block Chevy found in many customs and the Hemi fit in just under the wire with clearance. 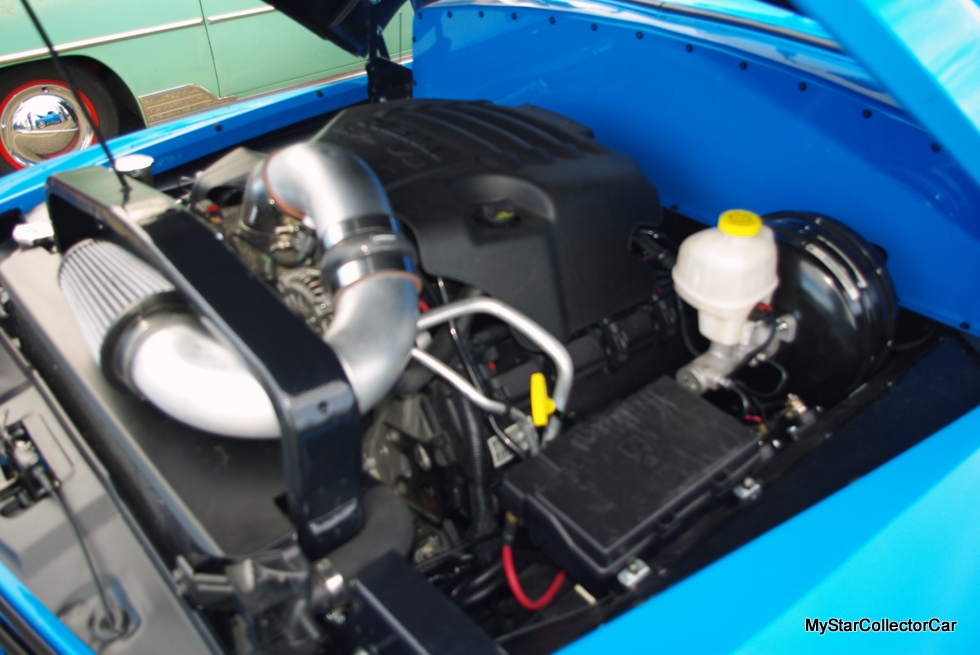 Dennis is definitely a visionary because this truck is a combination of many unrelated parts. The majority of the parts came from a rolled 2015 Dodge truck. The damage was minimal—Dennis even “sold a lot of parts off it” to offset some of the project costs. 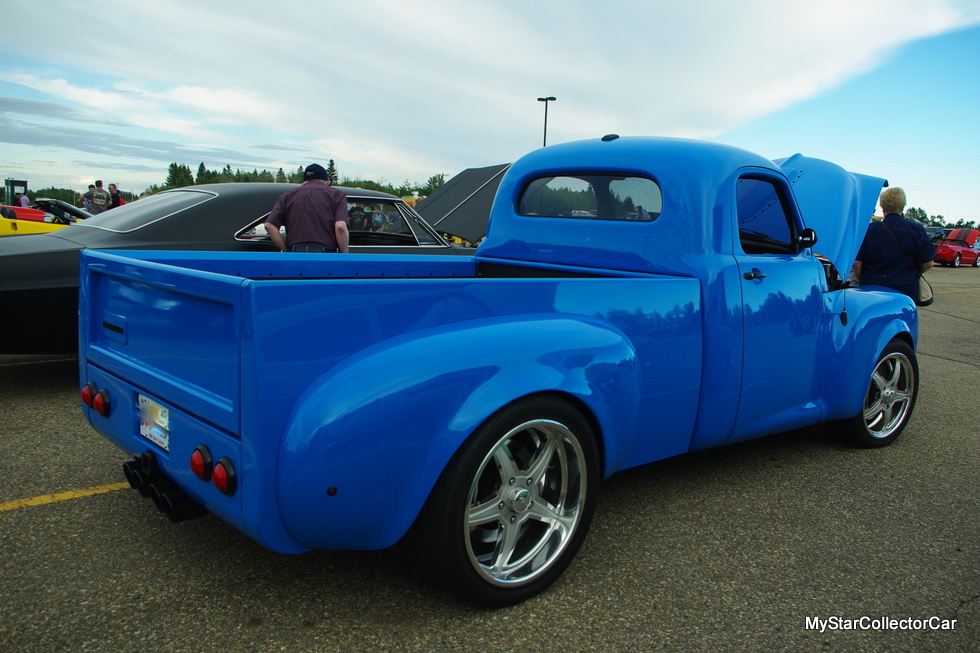 The Studebaker sits on the 2015 Dodge donor frame but Dennis made some serious corrections to the factory dimensions. He “shortened it by 20 inches and the cab supports came from the donor truck”. 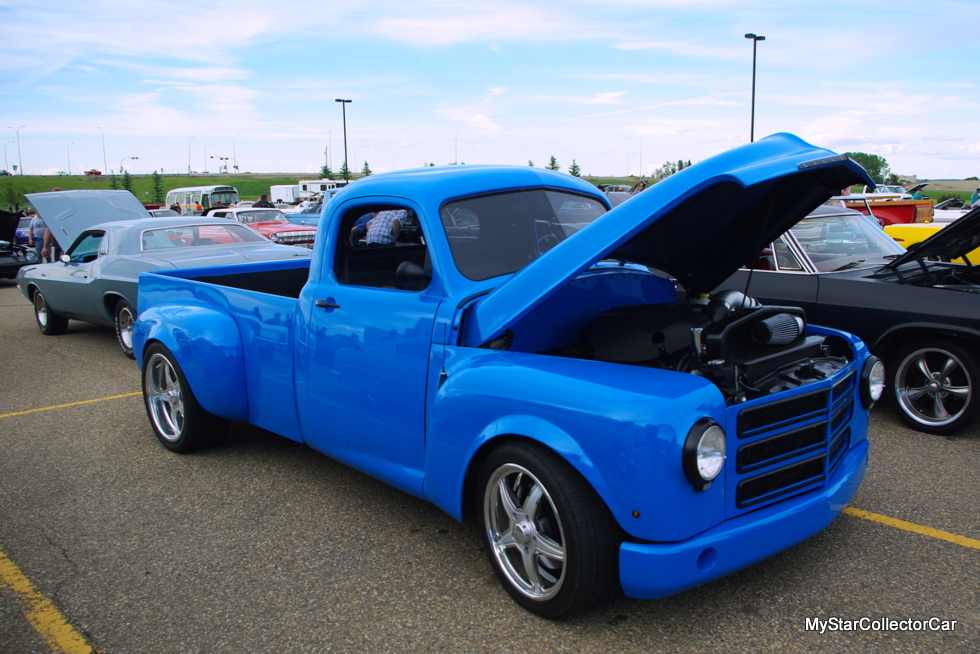 The donor truck supplied most of the new tech parts like the ABS, Bluetooth, satellite radio antenna, factory radio antenna and dash instruments.  Dennis also retained the 2015 Dodge rotary gear shift. There is a very familiar look to the cab of this ’49 Studebaker—especially for anyone who owns a newer Dodge truck. 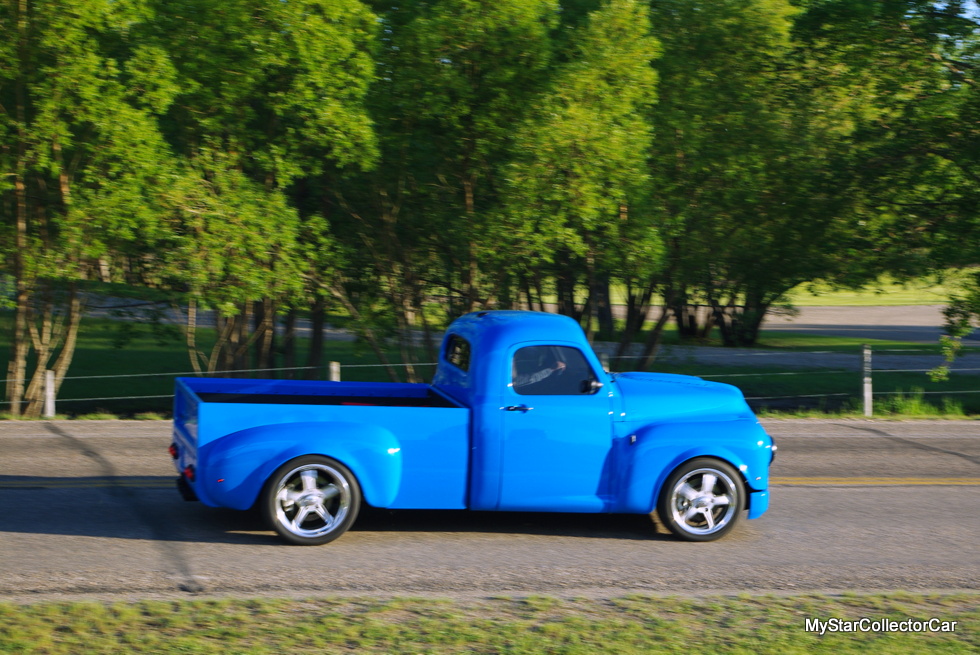 There are many other foreign parts to this build. The door handles are pure Volkswagen, the hood scoop is from a ’66 Shelby Mustang, taillights are ’52 Pontiac and the front grill pieces are from a ’67-8 Chevy Impala. The seats are from a Pontiac Sunfire and Dennis describes them as “really comfortable”.

Dennis is a hands-on guy so he went to his own considerable well of talent to fab up a console for his AC system. He baffled the supplier with his request for a console mounted AC system so he designed and built his own. 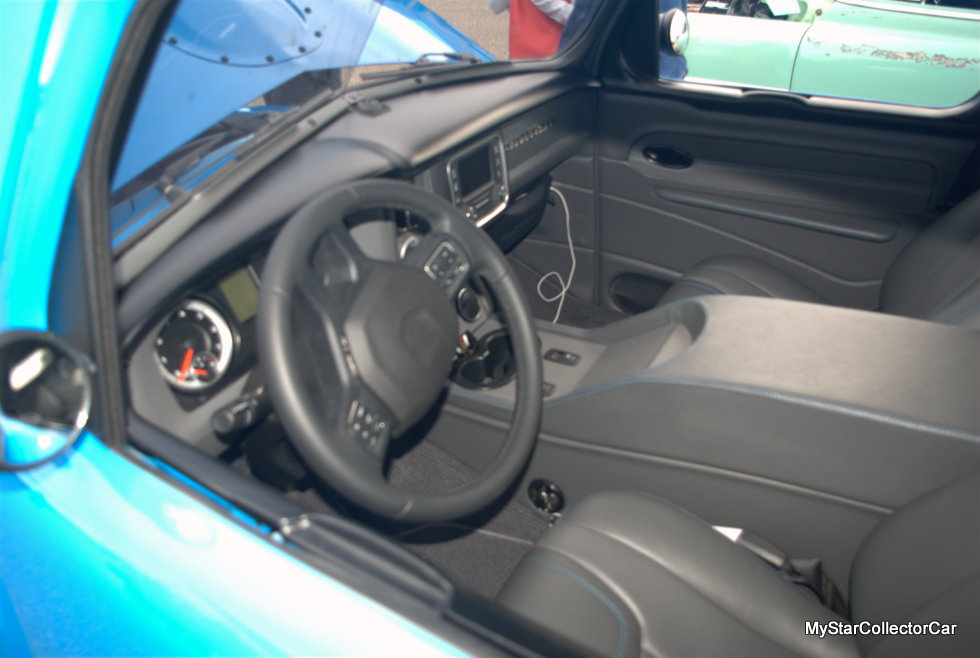 There were other custom modifications to make this Studebaker work. Dennis had to make the truck bed shallower to accommodate the new Dodge undercarriage so it’s 12” deep but the tailgate is still a factory 20”. 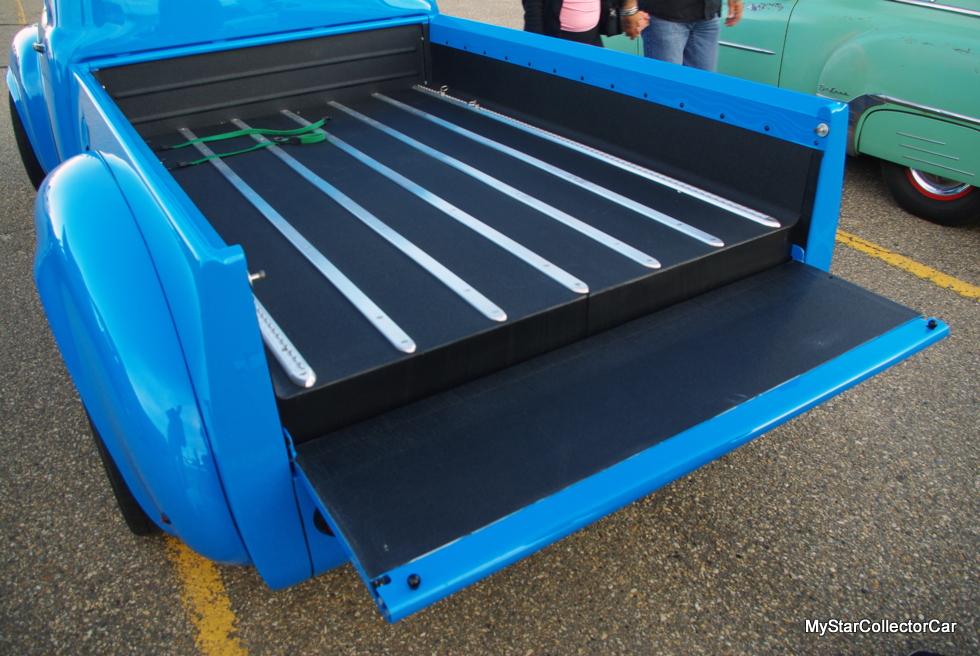 The tailgate itself is another feat of engineering because Dennis eliminated the straps and now it’s a simpler, cleaner system that opens like a new truck thanks to the use of rubber snubbers.

There’s a trailer plug at the back plus the truck has factory Dodge Hemi outlets (times four) to show case the distinctive rumble of a 3rd Gen Hemi. 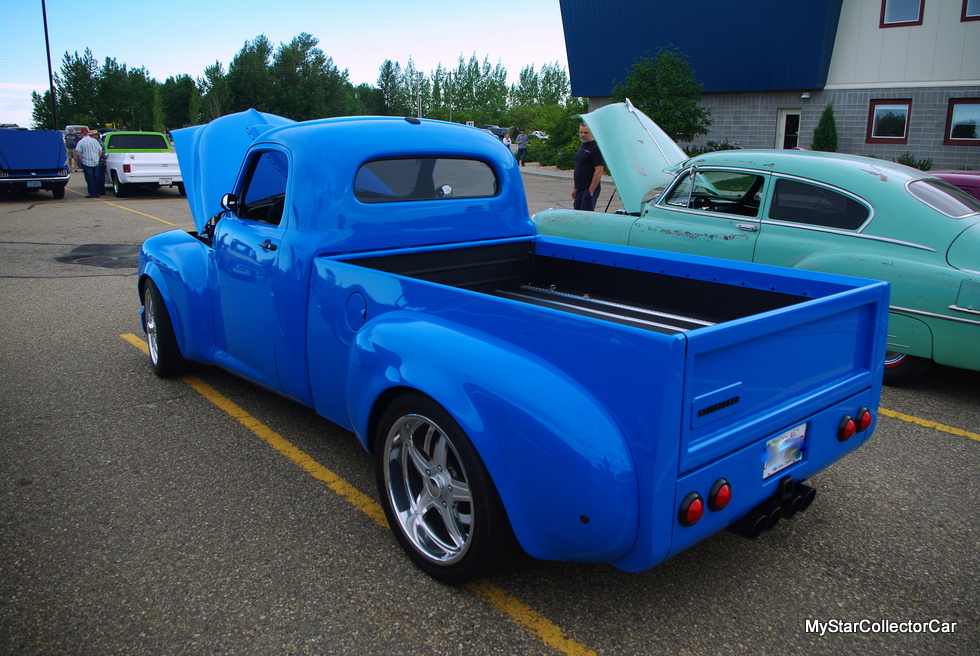 Things were tight under the hood so Dennis had to modify the fuse box plus the air intake shows a little wear from its proximity to the hood.

Dennis describes the driving experience as “just like a 2015 Dodge truck” plus it gets decent gas mileage (22 mpg) thanks to the MDS (Multi-Displacement System). 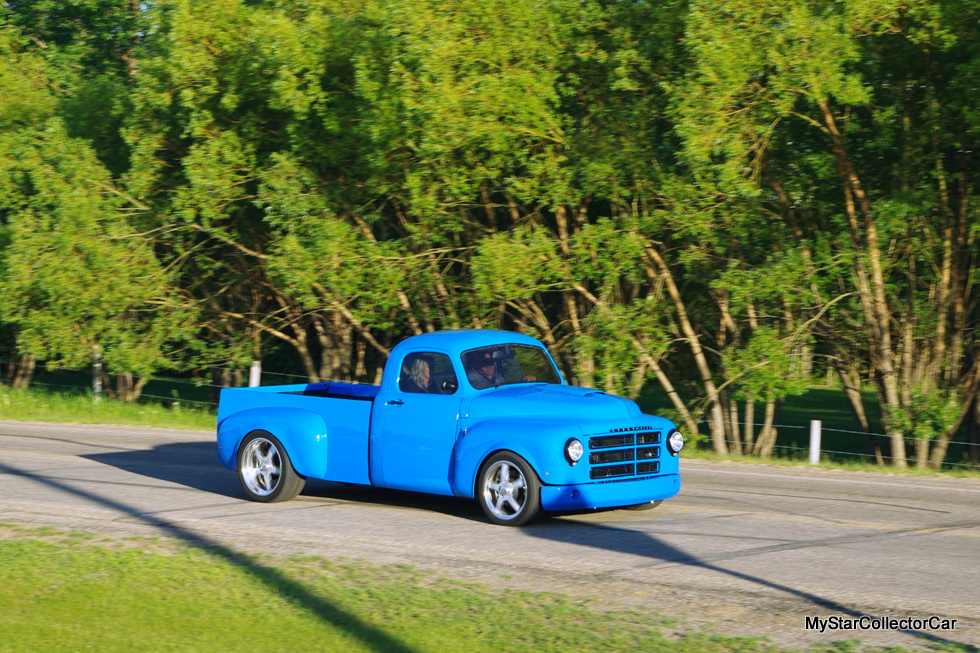 The real question is how much does Dennis like his Hemi-powered ’49 Studebaker?

“It’s great, of all the hot rods I’ve built it’s the first one where I can still talk and hear the radio at 80 miles per hour”.