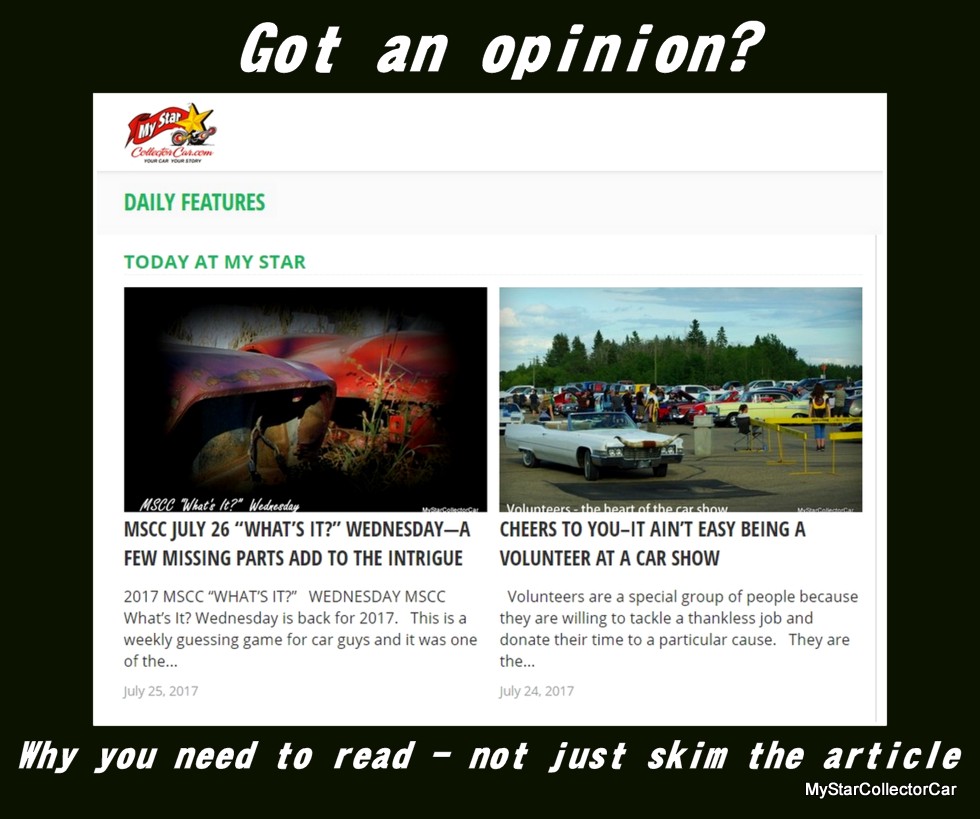 MSCC will always lead with an attention-getting device because it’s the right thing to do when it comes to snaring a reader’s interest.

We are not alone because every publication worth its salt uses the same tactic with its readers.

If you can’t hook ‘em in the headlines, then land ‘em in the first paragraph.

The meat of the issue can be digested in the ensuing paragraphs. In the past, the system worked well with readers because they had to pay for paper editions of publications, thus they invested in a financial sense, so they were more likely to read an entire article.

MSCC likes to pare articles down to a readable size because nobody really likes to encounter a ‘War and Peace’-sized story in the midst of pieces that average about 500 words.

I became a freelance writer for old school paper dailies about 32 years ago and the first order of business was slicing and dicing my articles down to between 500 and 600 words from their bloated size that approached 1000 words.

The best advice I ever received came from a cynical veteran newspaper editor who told me to write shorter articles when I complained about the severity of the edits.

I still believe in the 500 to 600 word rule because they represent a minimum number for a relevant article in my opinion. However, I failed to account for the 21st century skimmers and knee-jerk reaction types who are the written equivalent of Hall of Fame rude people who choose not to listen and interrupt a conversation before they have all the information.

Recently I wrote an MSCC piece that went by my 600 word maximum rule by about 67 words. It was a mistake on my part because of its length; a number which should have shown why Word should have an idiot light or buzzer when word maximums are exceeded.

A lengthier piece is not a good fit in today’s world because of the aforementioned skimmers who get plenty of misinformation when left to their own shallow devices.

The point of contention for the over-reactive and under-informed guy was a piece I wrote about a car show. The guy failed to read the article beyond about four or five paragraphs and then decided to respond to the article before he had all of the very pertinent facts.

He might have also noticed that MyStarCollectorCar is a website totally dedicated to old iron and this particular new age show was actually well-represented in this regard. He might have noticed that I registered my surprise in the article to the show’s organizers for their efforts.

He would not have seen the email from one of the young women who organized the show and wanted to thank MyStar for its piece on her show.

Incidentally, she read the piece from beginning to end before she registered an opinion.