MSCC TIME CAPSULE:A LOOK BACK AT AN ERA WHEN LEGENDS WERE ON A FAMOUS CAR LOT

The hyphenated name ‘Baldwin-Motion’ is enough to make Chevy car guys’ hearts race to levels well beyond their cardiac redline.

The Baldwin-Motion version of a late 60s and early 70s muscle car from the General is a flat out legend in car circles.

An authentic Baldwin-Motion car that appears at a vintage auction will bring out the big boys in the collector car world. The successful bidder will have purchased one of a handful of street monsters that were born in a GM factory and raised on Baldwin-Motion fury. 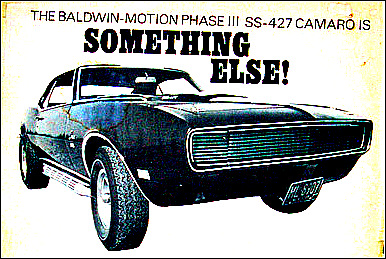 Clearly a Baldwin- Motion car didn’t want to merely win on the streets-they wanted to own the pavement- and they didn’t believe in taking any prisoners in battle.

They struck fear in every enemy that dared to cross their path, and they did so with the full blessing of the General and its battle commanders at Baldwin-Motion.

I found this ad in a January 1969 edition of ‘Rodder and Super/Stock’. A qualified buyer with around 3600 bucks could unleash hell in the streets back in ’69. A Baldwin-Motion Phase III SS-427 Camaro could be purchased for that kind of coin. 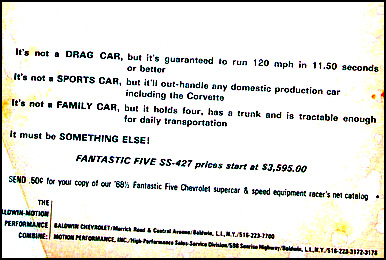 Somehow it seems a little surrealistic when looking in from the 21st Century at an option to buy a Baldwin-Motion Camaro from a dealership in 1969.

I have no idea what kind of buyer purchased this kind of car, but the fact that genuine Baldwin- Motion cars are as rare as 35 cents a gallon premium leaded gas suggests that there may be a few cars and original owners missing in action.

Sometimes monsters are not easy to tame.